For Sarah Rudder, Sept. 11, 2001, began as an ordinary Tuesday morning in Arlington, Virginia. The 18-year-old Marine was receiving a promotion from private first class to lance corporal.

Twenty minutes after her promotion ceremony, the call came through — the Pentagon had been hit.

It was all hands on deck as Rudder made her way to Washington, D.C. Upon arriving at the Pentagon, she ran headfirst into the flaming building. Rudder was responsible for transporting survivors to the base of the building to receive medical attention.

“Honestly, I was in fight-or-flight mode the whole time,” she said. “I knew what I had to do, because I was trained for casualty response.” 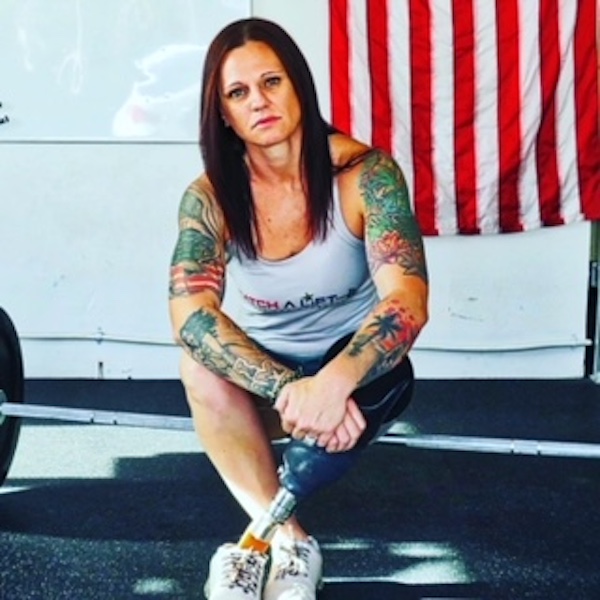 Rudder stood guard at the base perimeter through the night. When the fire had gone out the following morning, she went back for those who didn’t make it. Early on while searching for non-survivors, Rudder’s left foot slipped awkwardly into a hole. She thought nothing of it at the time and continued on.

“I was in shock, and I was only seeing the task at hand — and that was either to help save as many people as possible or to ensure a family received a proper burial for their lost loved one,” Rudder said.

Twenty-four hours had passed before she noticed anything was wrong. It wasn’t until she finally sat down and removed her boot that she realized the misstep had crushed her left ankle.

Rudder’s ankle damage was compounded by injuries from a car accident just 10 days prior. Her car had hydroplaned and hit the center divider, resulting in a broken scapula and nose, multiple fractured ribs, and head trauma.

In the months that followed, Rudder had three total ankle, Achilles, and knee reconstructive surgeries alongside several other minor surgeries necessary to save her leg. She left the hospital with a titanium rod and three screws in her leg.

Four years later, Rudder developed complex regional pain syndrome (CRPS) and spent the next nine years dealing with prolonged pain and swelling. By 2014, she was left with two options — amputation or a surgical rod running from hip to ankle.

Rudder had had enough with the hardware. She chose amputation.

“When it came to thinking about amputation, I was ready,” she said. “I was in so much unbearable pain it was really a no-brainer for me.”

“I remember when I woke up the first time it was a relief, because that pain that had been constant for years was finally gone,” Rudder recalled.

Six weeks after the surgery, Rudder was fitted for her prosthesis. At the fitting, the prosthetist told her she would need to use crutches to learn to walk properly again.

Rudder looked him in the eye and declared, “I’m not leaving this office with crutches.”

She spent the next eight hours walking up and down the rehab-office hallways, trying to develop the correct movement patterns. That evening she was on her way home — no crutches in sight.

Days after, she did a workout at Driven CrossFit in Temecula, California.

“I started small and light,” she said. “And then once I started gaining my strength and balance, it became more fun than anything for me because it was like, what else could I do? Now that I figured this out, what’s next?” 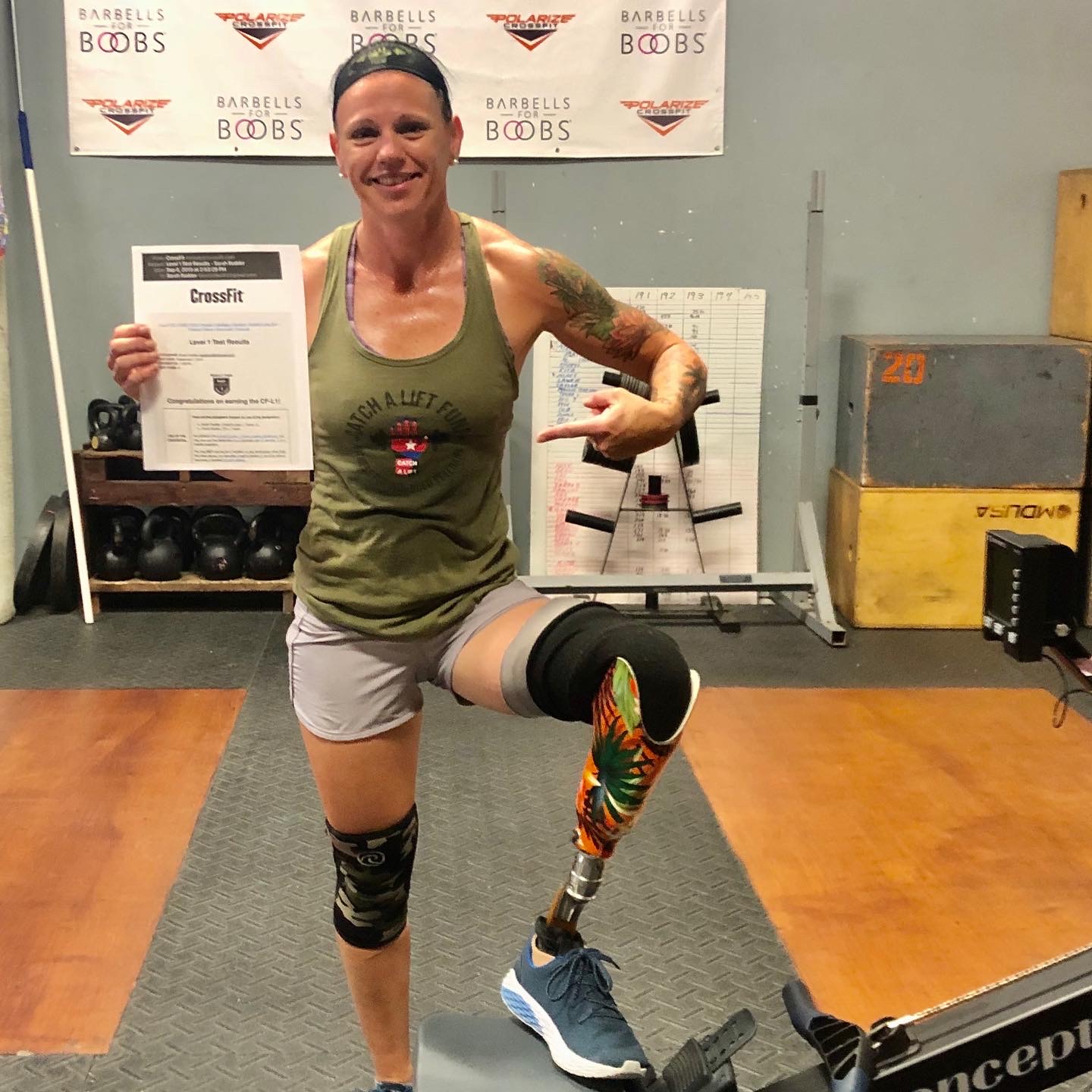 Years before her amputation, Rudder had been in a dark place, tormented by years of pain and endless thoughts of all she had witnessed and experienced during her military service.

“I began to take a bunch of pills, drink what was in sight, eat what was in sight, and I ended up keeping all my childbirth weight plus some,” said the mother of now 13-year-old son Xavier. “I was trying to get back to normal life. I tried to play soccer again, but that quickly came to an end when my ankle started to lock and dislocate.”

In 2010, Rudder was diagnosed with a traumatic brain injury (TBI) resulting from her 2001 car accident and post-traumatic stress from the events she faced on Sept. 11. Finding CrossFit in 2013 was a light at the end of a very long tunnel.

“I realized that not only was I losing weight, my (post-traumatic stress) was a little easier to manage by finally not having those thoughts or distractions in my head for that one hour,” she explained.

As Rudder learned to live life as an amputee, she experimented with new movements inside and outside the gym. One of her proudest CrossFit moments was when she got her first ring muscle-up in 2018 — on the first try.

“I was always kind of watching people in awe of them doing it,” she said. “I got in my head that there was no way I would be able to do anything like that. (But) I was able to just get up and do it.”

Over time, CrossFit became more of a mental outlet than a physical one for the veteran. She could dump everything she had gone through into her workouts and leave it on the gym floor.

“I realized I was able to be doing CrossFit and not thinking about anything else at that time, which is exactly what I needed,” she said.

Today, Rudder trains six days a week and coaches kids and members of her local community. She also volunteers with the Catch a Lift Fund, a military nonprofit for wounded veterans. The Catch a Lift Fund program provided healing for Rudder through fitness, nutrition, emotional wellness, and community during a time when she needed it most. She now coaches 63 veterans going through the same program and pays it forward by supporting her fellow brothers and sisters in service as they seek healing.

In fewer than seven days, she’ll compete at the 2021 NOBULL CrossFit Games in the Women’s Lower Extremity division, one of six new divisions for adaptive athletes. The competition, she said, will be an opportunity to show able-bodied people just how formidable adaptive athletes are.

“I’m always being compared to people with two legs, and it’s really hard,” she said. “Yes, I have a prosthetic, but we have to use so much more energy just to get that prosthetic to move or balance. I don’t think people really understand the difficulty and how much we actually have to push ourselves to get through each thing.”

Keep that in mind when you watch Rudder take the stage in Madison on July 27.

“I am ready to face my challenges in order to show that I can not only physically do this but mentally I can too,” she shared.

Grab your tickets to watch Rudder’s live performance at the CrossFit Games or watch the livestream on Facebook, YouTube, Twitch, and games.crossfit.com. The leaderboard will be updated throughout the competition.

All photos courtesy of Sarah Rudder