It was the third day of competition for the adaptive athletes at the 2021 NOBULL CrossFit Games. Under the bright Coliseum lights, CrossFit fans filled the stadium, eagerly awaiting the final event — a descending rep scheme of handstand push-ups and push presses. But after three grueling days of intense strain, Lower Extremity athlete Amy Bream was physically and emotionally spent. She didn’t believe she had it in her to continue on in the competition.

With only two minutes left before the 11-min. time cap, Bream began to fail reps on the push presses. Frustration and pain shone on her face, but there was zero quit in her eyes. She stepped back and shook out her hands before returning to the bar to try once again. The countdown ticked to under a minute, and her coach started to scream, “Let’s go! Keep going!”

In the last five seconds, Bream’s arms straightened with the bar overhead, and the crowd began to roar. When the buzzer sounded to end the 2021 NOBULL CrossFit Games adaptive competition, tears ran down Bream’s and her coaches’ faces as the crowd stood in applause.

Bream once said “athlete” wasn’t even in her vocabulary. But after the 2021 NOBULL CrossFit Games, she joined the world of athleticism.

Growing Up With One Leg

Bream was born without the majority of her right leg and most of her femur. The congenital disability is called proximal femoral focal deficiency (PFFD) and was only discovered after she was born. Her parents knew they needed to encourage Bream not to be held back by her missing limb, and fit her with a prosthetic leg when she learned how to walk.

But, growing up in the small town of Boiling Springs, Pennsylvania, and with four older siblings, she tried her best to blend, ignoring the fact she only had one leg rather than acknowledging it. Bream never realized the potential she withheld.

“I honestly had a great childhood. I always had strong family and friends, and especially being the youngest of four kids, they never really let me get away with using my leg as an excuse,” Bream said.

Although Bream was encouraged to attend physical therapy growing up, she resisted the treatment, convincing herself she was better off fitting in as best she could. She fell in love with music but never pushed herself out of her comfort zone athletically. Gym class was a nightmare, and she didn’t even consider after-school sports.

It wasn’t until she moved to Nashville, Tennessee, in 2014 to pursue music after graduating from Messiah College in Pennsylvania that she decided to get active and build her confidence as an athlete.

It was a fellow amputee who changed her perspective on life. Erin Meyers is a below-the-knee amputee with a congenital disability much like Bream’s, and after meeting, Bream understood how important it was to connect with similar people for support. This was the first time she had met another amputee, and she was 22. It was eye-opening to learn from someone who understood her.

“It was the first time ever that a human was able to describe exactly what happens in my mind and connecting to my body, and it was like, ‘Is this what this feels like?’ I’m not alone,” Bream said.

From that day forward, she decided it was time to stop trying to fit in.

That same year, Bream joined Title Boxing Gym and went to a doctor in Nashville to be fitted with a new prosthetic to fit her new active lifestyle. She fell in love with kickboxing and slowly moved her way up in the ranks from member to operations director.

The first time Bream touched a barbell was in 2019, when the boxing club introduced strength classes for the first time. However, she suffered her first grueling CrossFit workout in March of 2020, as gyms began to shut down due to the COVID-19 pandemic. Bream was left with just two coaches, Tyler Thompson and Jarrod Houston, to train with during the lockdown, and their training consisted of CrossFit-style workouts with a focus on weightlifting and building strength.

“There weren’t any girls or anyone to compare myself with. They just would put weight on a bar and were like, ‘You're gonna do this.’ Still, I wasn't doing a lot. I'd never snatched before. … All of that was foreign to me,” Bream said.

One year later, in January 2021, Scooter Houston — Bream’s current coach — moved to Nashville and started training with the group. Houston was the definition of an athlete. He played football most of his life, owned Mossy Creek Fitness in Tennessee, and had been competing in CrossFit for several years, including Wodapalooza in 2019.

And as the 2021 Open approached, Houston introduced Bream to the possibility of competing in CrossFit because of the introduction of the adaptive divisions.

The first reaction that came to her head was just to laugh. She had never done a proper CrossFit workout, let alone heard of the Open. But, a little part of her told her she needed to sign up. That’s when Bream’s athletic career took a major shift.

For three months, Bream studied the basics of CrossFit. She would drop in to the occasional CrossFit gym in the area but spent the majority of the season unaffiliated and working with her coach, first learning how to kip, then moving on to more complex movements like the handstand push-up. Bream picked up the sport extremely fast.

As she was learning the basics of CrossFit, Bream also had to find ways to adapt the movements to her abilities, which took extra time and patience with her prosthesis. Modifying movements depended on whether her prosthesis would be a help or a hindrance. She couldn’t rely on it for any kind of jump that required the leg to bend. For example, she couldn’t make her prosthesis bend during box jumps and rope climbs, relegating it to dead weight. Instead, she would do legless rope climbs and jump on a box with one leg.

For exercises that require explosive hip movements — such as the snatch or clean — she had to learn how to balance and catch on one leg, using her prosthetic leg as more of a kickstand. It provided stability but not power, requiring her to use her other leg to generate force.

“I only trained with non-adaptive (athletes), and there are certain movements I'll adjust, but 85 to 90% of the time, my reps are the same ... the movement is the same,” Bream said. “It's not about adapting to make it fair, it's about learning your capacity and what you're capable of.”

Although Bream was diving headfirst into the competitive CrossFit scene because of the Open, along the way, she learned how beneficial the workouts were to her everyday life. CrossFit has helped Bream learn how to get up off the ground or even get out of a chair when she isn’t wearing her prosthetic. She built up a strong core to help her walk down the stairs without grasping to a railing.

“It's funny because I do a lot of pistol squats, and, you know, people see that as a party trick. But as an amputee, you're not going to have your leg or a railing always by you, and you need to be able to stand up,” Bream said.

With only three months of CrossFit experience, Bream finished in second place in the Lower Extremity division of the 2021 Open and a ticket to Madison in her hand. But it didn’t hit her until her invitation reached her inbox while she was on vacation, sipping a margarita by the beach.

“I remember just looking at my friend and I was like, ‘I'm going to CrossFit Games,’ and at that point it was less than two months out,” she said.

Bream’s rigorous training started the second she returned to Nashville. Although she had already been training for more than an hour every day, the two months leading up to the Games were focused on more structured workouts with her coach, learning how to move her body more efficiently, and discussing strategies.

On July 27, Bream stood on the big stage at the 2021 NOBULL CrossFit Games, performing her athletic talents in front of millions. But the first day of the competition was met with a wave of frustration. She was the only above-the-knee amputee — which she firmly stated was not an excuse — and encountered challenges early on in the competition. But so many athletes had different impairments, and some workouts were harder than others for everyone.​​ The adaptive community put her negative mindset in check.

“Your impairment … is like your thumbprint. No person is going to be the same,” she said. “Sometimes it’s not about what’s fair, it’s (about) what you’re capable of.”

The adaptive community she competed alongside was an inspiration. She was used to being the only adaptive athlete, and suddenly seeing other athletes with impairments crushing workouts was a reality check that she was not alone and was capable of far more than she had ever realized. 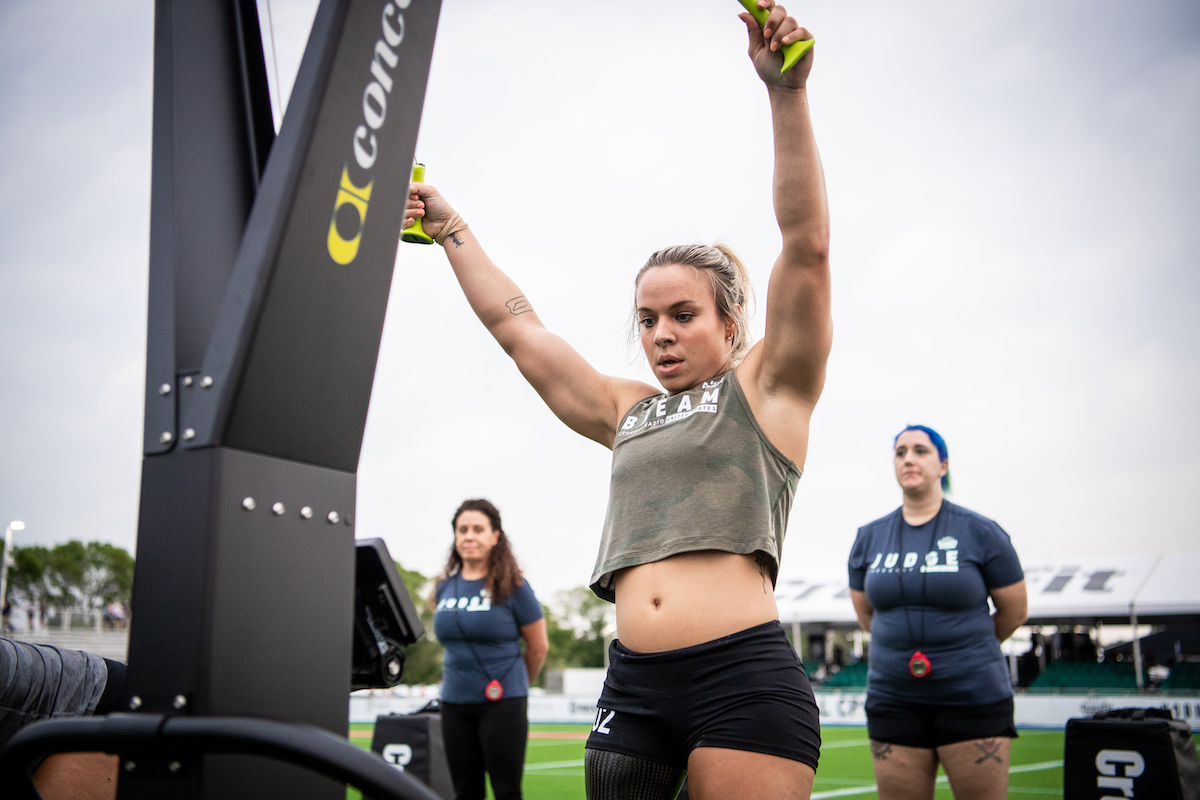 Bream said the Games were more challenging mentally than physically. She arrived in Madison with no idea what to expect; with less than a year of CrossFit experience, she was as green as they come. Many of the movements were still new to her, and she was just learning along the way.

Regardless, learning to believe in herself was her biggest success, something the entire CrossFit community witnessed on the very last day of competition in the final event.

“(My coach) was like, ‘I don't care how you feel, you will give everything you can, you will go into the last possible second, and you will push,’” Bream said.

And that is exactly what Bream did — pushed to the very last second.

“I was focused and unaware of kind of anything else except … the bar in my hand. I heard the room get louder and I was like, ‘Was that for me or did something else happen?’ And then I realized it was people cheering (for me), and it was such a humbling moment,” she said. 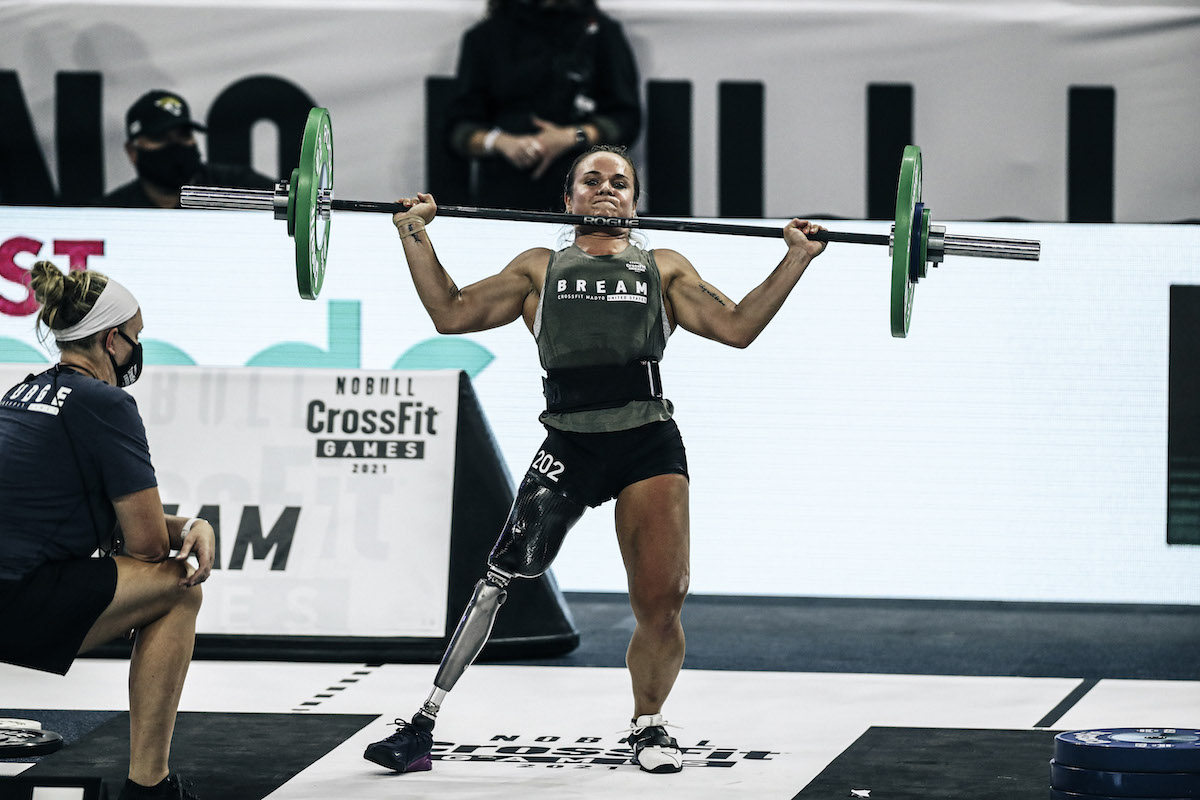 Bream finished the 2021 NOBULL CrossFit Games in fifth place with only two months of CrossFit experience under her belt.

“It was one of the best and definitely hardest weeks of my life, but I came out of it being like, ‘You know, if I can do that … I can do a lot more,” Bream said. “I want to push someone with two legs (in the future)!”

Now that the Games are done and dusted, Bream hopes to be a role model for other adaptive athletes — something she never had growing up. Through her Instagram page, she inspires followers with impairments that becoming an athlete is possible.

“I think it's so important to start showing it even if it looks messy … so the girls sitting at home thinking they can't do it will get off their butt and go do it and join us in future years,” she said. “Take the mentality and the resilience you gain through adapting and pushing yourself through CrossFit, and then go crush life.”