“People come into CrossFit for many different reasons — to get healthy, to lose weight, or whatever it is — but there was always a piece of our community that wanted to test the limits of their fitness and see what was possible.” —Adam Neiffer

Before the CrossFit Games became a tug-of-war between the top 1% of CrossFit athletes in the world, Adam Neiffer was throwing down at the Games on team CrossFit Fort Vancouver.

Before elite coaching was essential for success at the Games, he was coaching his team of superstar athletes to the podium.

Over the years, Neiffer has become one of the most experienced CrossFit athletes and coaches around. And this year, his name has gone down in history for coaching the Fittest Man on Earth to victory.

No Is Not an Answer

In 2017, CrossFit Fort Vancouver — the team Neiffer had been coaching, captaining, and competing on for 10 years — reached the pinnacle of its success. Knowing the soon-to-come changes to the Affiliate Cup in 2018 (allowing athletes to form a team regardless of where they trained), the teammates decided to have their last hurrah during the 2018 season before hanging up their competition T-shirts in the back of their closets.

After taking third place and standing proudly on the podium at the Games that year, the members of the Fort Vancouver team were pleased with their success and ready to start the next chapter of their lives.

Neiffer returned home from the competition ready to reprioritize his life. Stepping away from competition, he decided to change his focus to his faith, family, and affiliate, with no intentions of heading down that path again.

Until Justin Medeiros came knocking at his door.

Just as Neiffer had stowed his competition gear, a friend called him up, asking him to consider coaching an up-and-coming competitive athlete with incredible potential. With absolutely no hesitation, Neiffer declined the offer. He was done with the competition scene and had no interest in re-entering that world. But the friend kept calling, and to get him to stop, Neiffer agreed to talk to Medeiros.

“At this point, I was just talking on the phone with a random college kid, with no interest in working with him. I didn’t necessarily tell him at the time, so I made it very difficult for him,” Neiffer said.

Neiffer told Medeiros that if he wanted to find a coach, he would need to write a letter outlining his values, why he wanted to compete, his goals, what he was looking for in a coach, and more.

After handing Medeiros a laundry list of questions to answer in the letter, knowing that a 19-year-old would never complete the extravagant request, Neiffer hung up the phone and went back to his business, pushing the conversation to the back of his mind.

But two days later, an email showed up in his inbox. It was Medeiros’ letter, an extremely well-thought-out essay explaining every reason he competes and what he would value in a good coach.

“It was very cool. But at that point I was still not even considering it, until I printed it off and told Lauren (his wife), ‘Hey, check this out. It’s pretty funny this kid wrote this letter.’ She read through it and without hesitation told me I should do it,” Neiffer said.

Though he had his doubts, Neiffer decided to give Medeiros a shot, so he called him up and said they would do a trial during the 2019 Open. If the pair were compatible, Medeiros would need to move to Vancouver, Washington, in the summer to train.

There was no way Medeiros would pack up everything and move to a different state to train with a stranger, Neiffer thought.

It didn’t take long for Neiffer to realize how dedicated and hardworking Medeiros was, and after Medeiros placed 119th worldwide in the 2019 Open, Neiffer was convinced.

In May of 2019, Neiffer picked up the mullet-sporting college student from the airport — seeing him in person for the first time — and moved him in with his family for the season.

“I didn’t know Justin was going to qualify (for the CrossFit Games) or even place third or first … but I did know that he was a great dude, has an awesome attitude, and he’s willing to work really hard,” Neiffer said.

If Medeiros qualified for the 2019 Games, Neiffer said he would get a matching mullet. But Medeiros narrowly missed the final stage of competition after coming in fourth at the Granite Games. Determined to succeed the next year, Medeiros and Neiffer agreed to compete in every Sanctional until they received an invitation to the 2020 CrossFit Games.

The first Sanctional was the CrossFit Filthy 150 in Ireland, and although they worried it wasn’t practical to fly across the world to compete, they kept their word — and it was worth it. Medeiros won, and with only one Sanctional down on the path to the Games, he left Ireland with a ticket to the 2020 CrossFit Games in hand.

Neiffer kept his word, too, and grew a mullet right after they arrived back home. 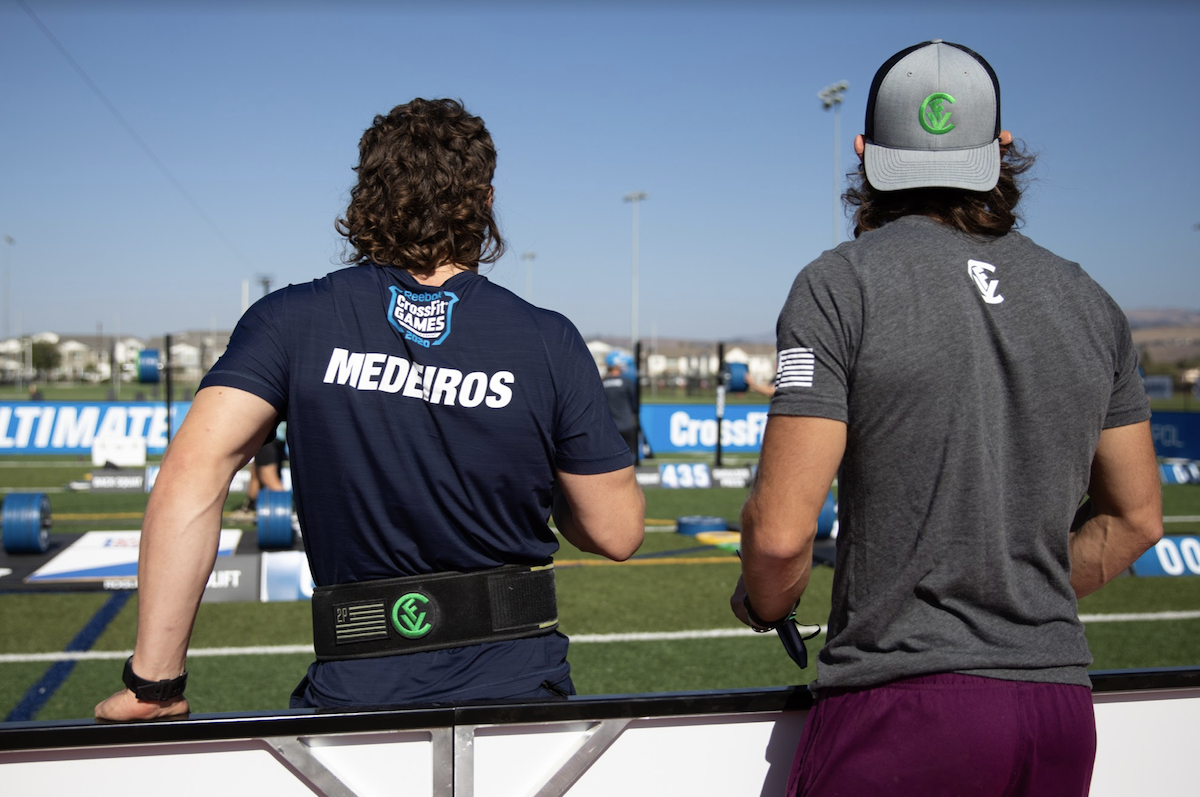 “I’ve Walked a Mile in Your Shoes”

During the 10 years CrossFit Fort Vancouver competed for the Affiliate Cup, Neiffer had 25 teammates.

“That experience let me work with a wide variety of athletes, both men and women, in our sport and learn a lot about how to relate and connect with those individuals to help get the most out of each person,” Neiffer said. “Each athlete has a different style and resonates in different ways, and learning that as a member, captain, and coach of the team was an invaluable experience.”

What makes Neiffer so unique is the fact that he has such extensive knowledge and a diverse background in the sport. He can relate to what Medeiros is going through on and off the field.

“When he laces up his shoes and goes out into the arena … I’m trying to coach him from a place of, ‘Hey, I’ve been in your shoes. … Mentally, I can relate to some of the things he’s going through,’” Neiffer said.

The value of coaching continues to increase as the sport evolves. Early on in Neiffer’s competitive phase, coaches were not essential, because everyone was just trying to figure out the sport as they went. But as the athletes have gotten stronger and more competitive, coaching has become a staple for athletes hoping to earn a ticket to the Games.

There are several roles coaches must play to take their athletes to the next level in this stage of the sport. There’s the role of the programmer to ensure the athlete is training properly; the coach, who works on nurturing the athlete with strategy and mindset; and now, specialty coaches to help the athlete excel in endurance, swimming, weightlifting, gymnastics, and other niches.

“Our sport is so diverse in terms of the physical demands that there is so much opportunity for coaching,” Neiffer said.

Early in Medeiros’ training, Neiffer wore all the hats. It wasn’t until after the 2020 Games, after Medeiros’ quick rise to the top, that Neiffer knew it was time to add to the arsenal.

“My job is very simple: help (Medeiros) become the best CrossFit athlete that he can be,” Neiffer said. “I’m equipped to do that pretty well in a lot of areas, but there are other areas where I know there are other people out there that know a lot more than me about their specific disciplines.”

The biggest flaw in Medeiros’ development was his upper-body pressing, so Neiffer called up a long-time friend, Jesse Bifano, to help Medeiros with his powerlifting strength in preparation for the 2021 Games. Co-owner of Squamish Barbell and former Canada West Regional competition director, Bifamo has a slew of credentials including an NCCP Olympic Weightlifting certification and Ma Strength Chinese Weightlifting Levels 1, 2, and 3.

And growing the coaching team appears to have been a good call. After joining forces with Bifano, Medeiros added Rogue Invitational and CrossFit Games wins to his resume.

The coaching team of two trained Medeiros throughout 2021 before adding more specialty coaches to help in various roles throughout the season, such as gymnastics and swimming. And the extra expertise has not only helped Medeiros; it's also given Neiffer a way to improve his coaching, providing him with a sounding board to bounce ideas off of. 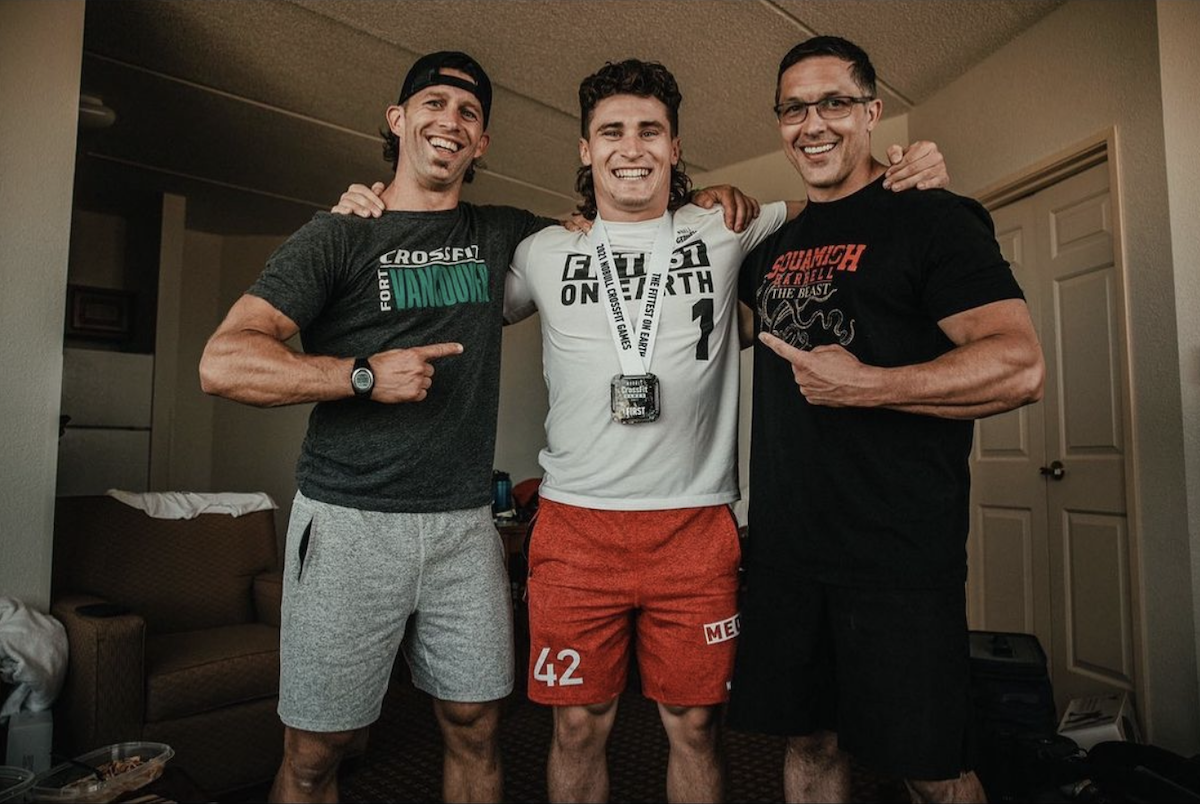 Neiffer’s Experiment Was a Success

Through determination and hard work — and maybe some extra luck from the matching mullet magic — Medeiros took third at the 2020 CrossFit Games, won the Rookie of the Year award, and left hungry for more heading into the 2021 season.

The goal was simple: to make the 2021 version of Medeiros even better than 2020’s. Neiffer never discussed winning the CrossFit Games as a set goal heading into the season. A podium position wasn’t even the goal. The sole focus was on improvement in all areas.

The 2021 NOBULL CrossFit Games Open was a time for Medeiros to find his weaknesses and learn as much as possible about himself as an athlete. It was a time to be bold — this time in front of the entire CrossFit community during the live 21.2 Open announcement.

“A year before, his dream was to qualify for the CrossFit Games. The very next year, he’s doing an Open announcement!” Neiffer said.

Taking every correction and piece of advice from Neiffer, Medeiros took sixth at the Individual Quarterfinal, third at the MACC, and headed to the 2021 NOBULL CrossFit Games as a fierce contender for a podium spot.

By the time Medeiros landed in Madison, Wisconsin, there was no going back. He was as prepared as he was going to get, and it was up to him to give it all he had.

“As a coach, you can prepare and plan and strategize as much as you want, but ultimately, it’s up to the athlete to go out there and execute,” Neiffer said.

Although Medeiros technically entered the field in 2021 as a returning Games athlete, his rookie experience in 2020 wasn’t exactly typical. Starting the 2020 CrossFit Games online, he flew out to Aromas, California, to compete against only five of the top competitors in the second stage. There were no spectators, there wasn't a full field of athletes, and the competition was under strict COVID safety protocols. Medeiros finished 2020, a low-key year for the CrossFit Games, in third place out of five, which meant he was truly middle of the pack, Neiffer said. 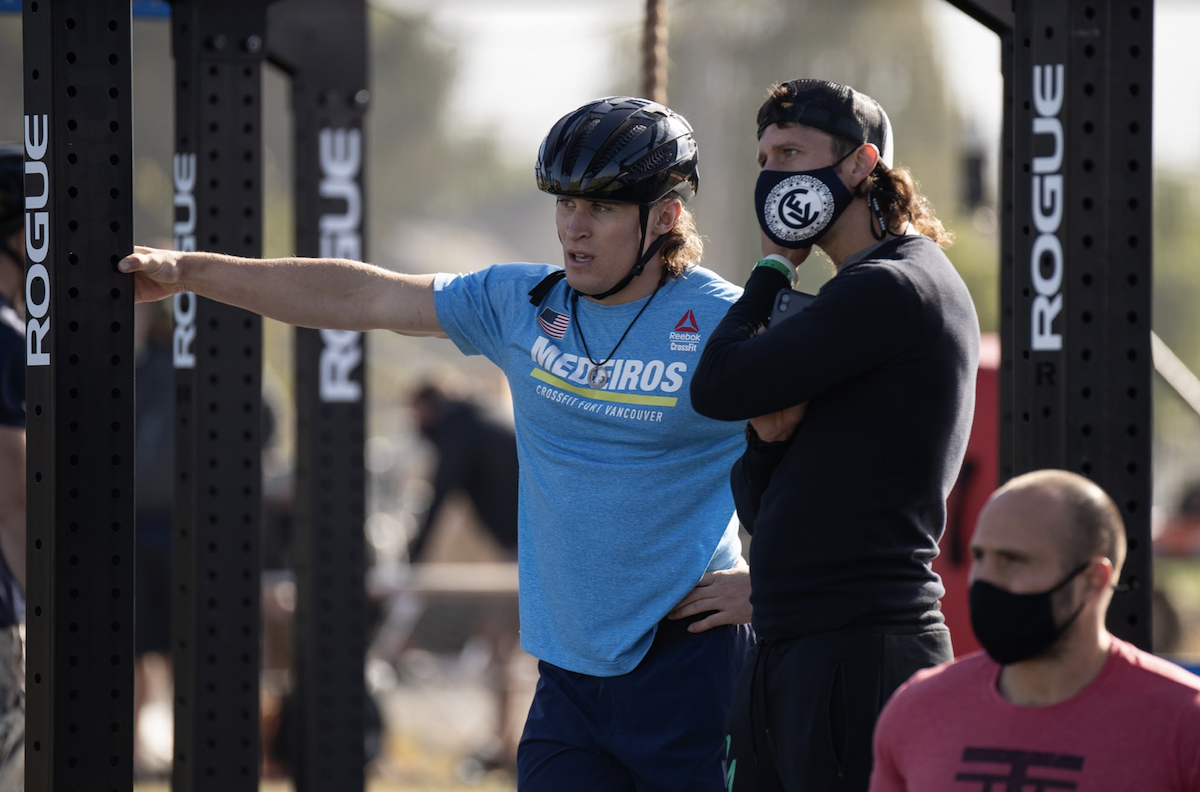 The vibe was different in 2021. This year, Medeiros was given a big stage to shine on, and as we all know, he took full advantage of it.

“All credit goes to him. He’s the one out in the arena … making the split-second decisions. He made a lot of progress from the previous season. … He learned a lot of things, and you could see them being applied on the competition floor in 2021,” Neiffer said — meaning all Neiffer could do was sit back and watch a full year of hard work unfold on the competition floor.

Five months after Medeiros took the top of the podium, Neiffer reflected on a coaching philosophy. Training from the Open to Semifinals, he said, is like an experiment — and at the Games, you get to test if you were successful.

Neiffer’s experiment was a success.

Tears of joy rushed down his face as he watched Medeiros embrace his family standing in the crowded stands, moments after being named 2021’s Fittest Man on Earth. 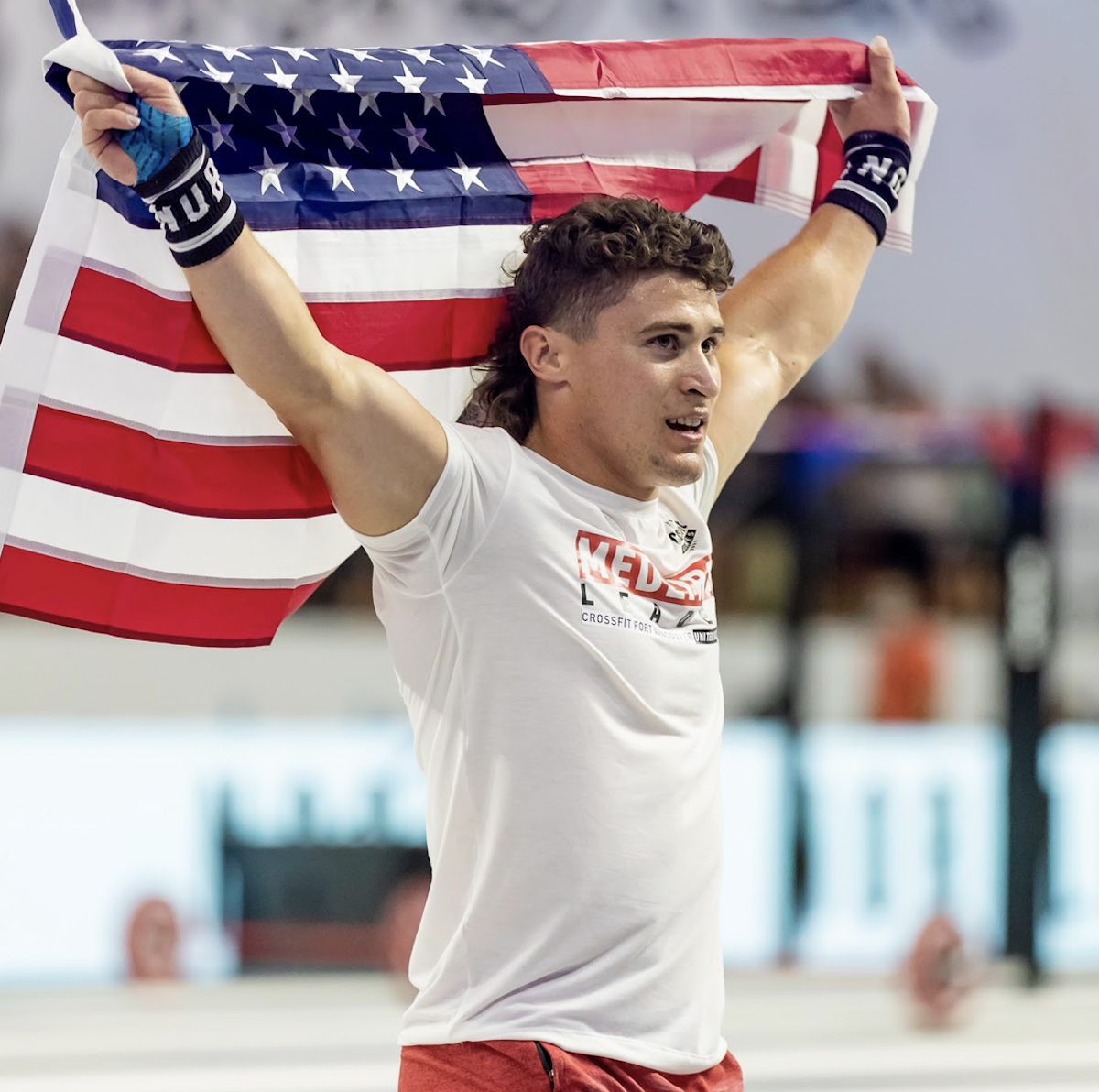