The final workout of the 2022 NOBULL CrossFit Open challenged us with double-unders, thrusters, pull-ups, chest-to-bar pull-ups, and muscle-ups. The workout featured a ladder of increasing weight on the thrusters and increasing difficulty on the rig-based movements.

Unlike the first two workouts, which were very accessible, 22.3 tested higher-skill movements in the gymnastics elements and strength in the thrusters. The format of the workout, which became progressively more difficult, allowed athletes to separate themselves based on their capacity in these movements. By starting off the Rx’d version of the workout with pull-ups, all athletes without that skill were required to opt for the scaled version. As a result we saw a lower share of athletes perform the Rx’d version compared to 22.1 and 22.2.

For 22.3, the chart below shows the performance among the top 10 countries by participation. Athletes aged 16-54 performed the same Rx’d and scaled versions of the workout, so we included numbers from these age groups in the chart.

More than 10% of athletes finished the Rx’d workout this week, so we used that percentage to assess competitiveness among the top countries. Based on this metric, Brazil was the most competitive at 16.2%, followed by Italy at 14.9% and Spain at 14.5%.

If we compare the percentage of a country’s athletes who performed the Rx’d version, Australia had the highest share for the third week in a row with 78.3%. 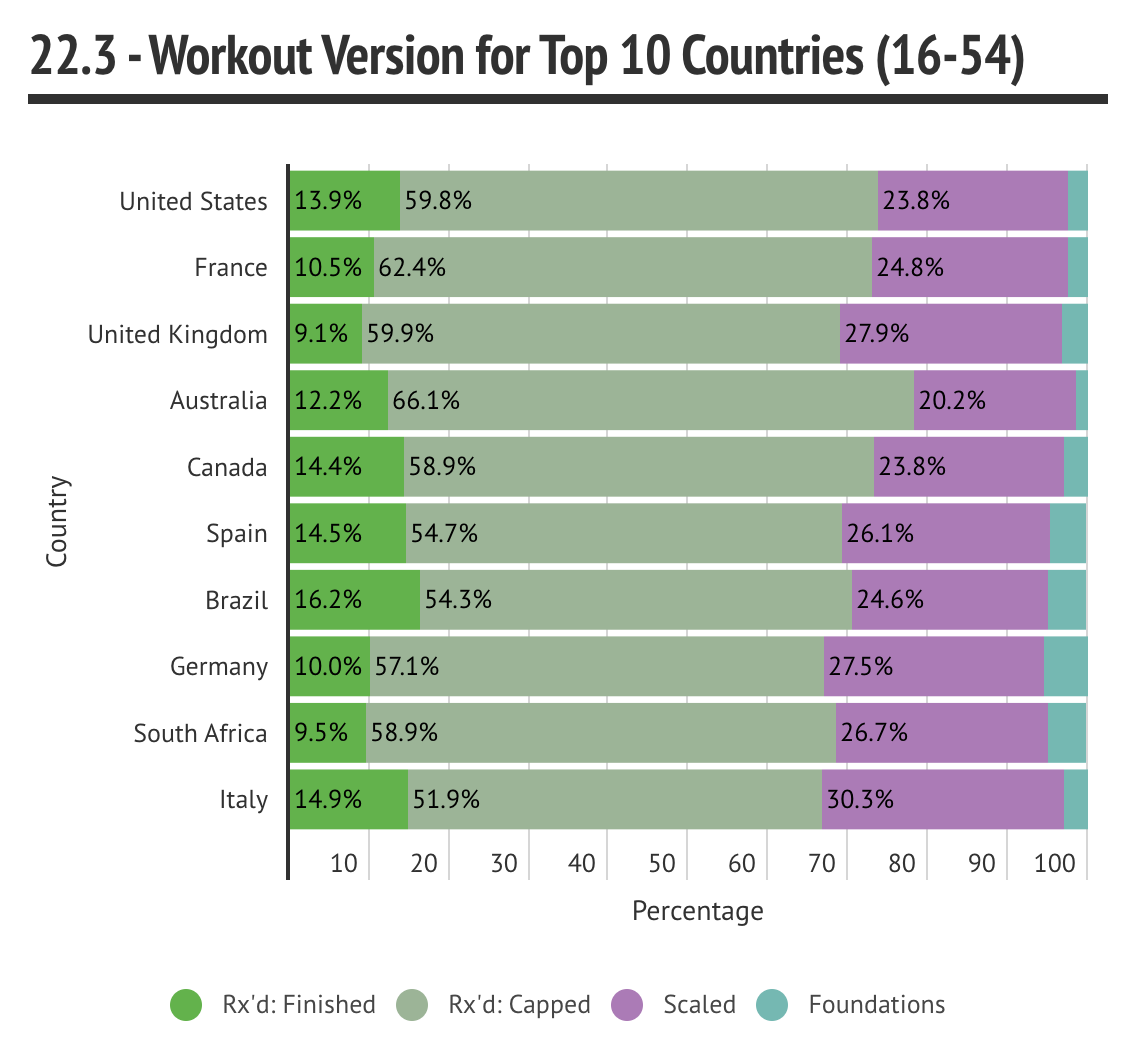 This workout was similar in flavor to 21.3, with notable differences including pull-ups instead of toes-to-bars, double-unders instead of front squats, increasing weight on the thrusters, and no rest between rounds, to name a few.

For masters divisions, 8% were able to finish compared to 7.6% for teens and 28.1% for adaptive athletes. 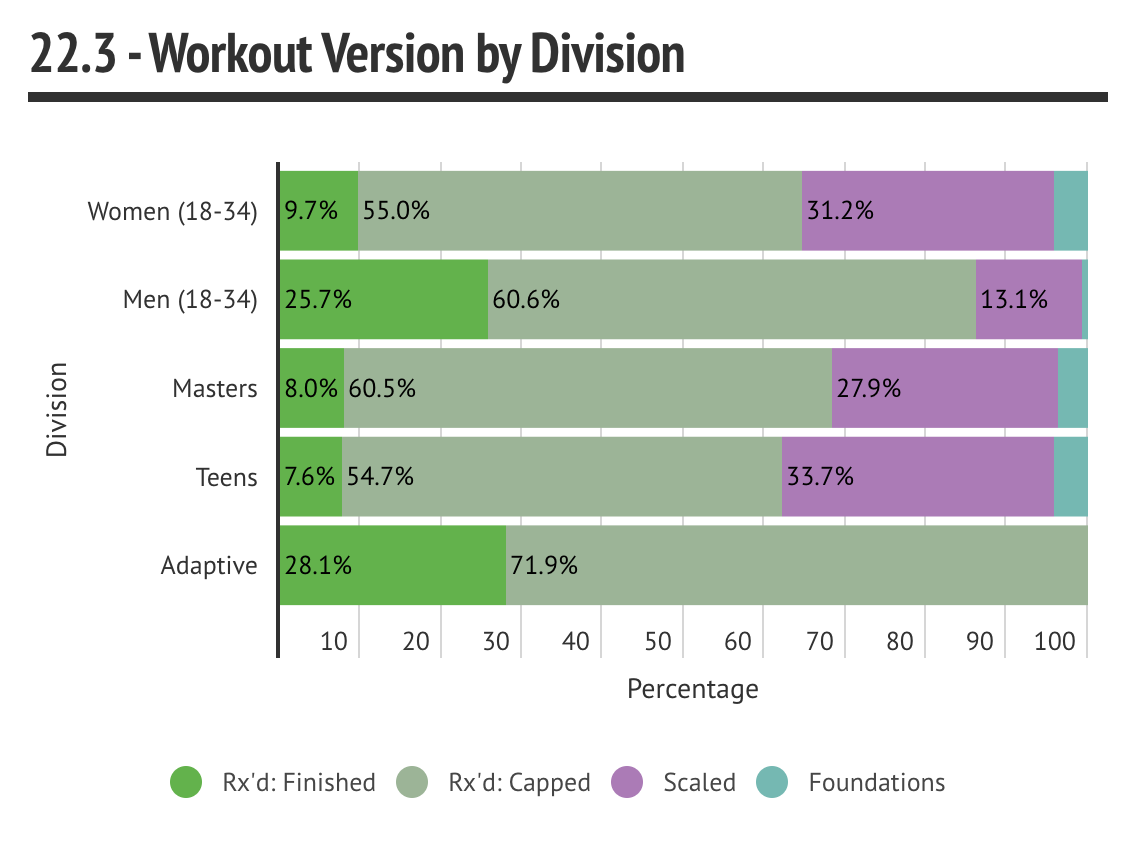 Workout scores could be divided into four major sections: 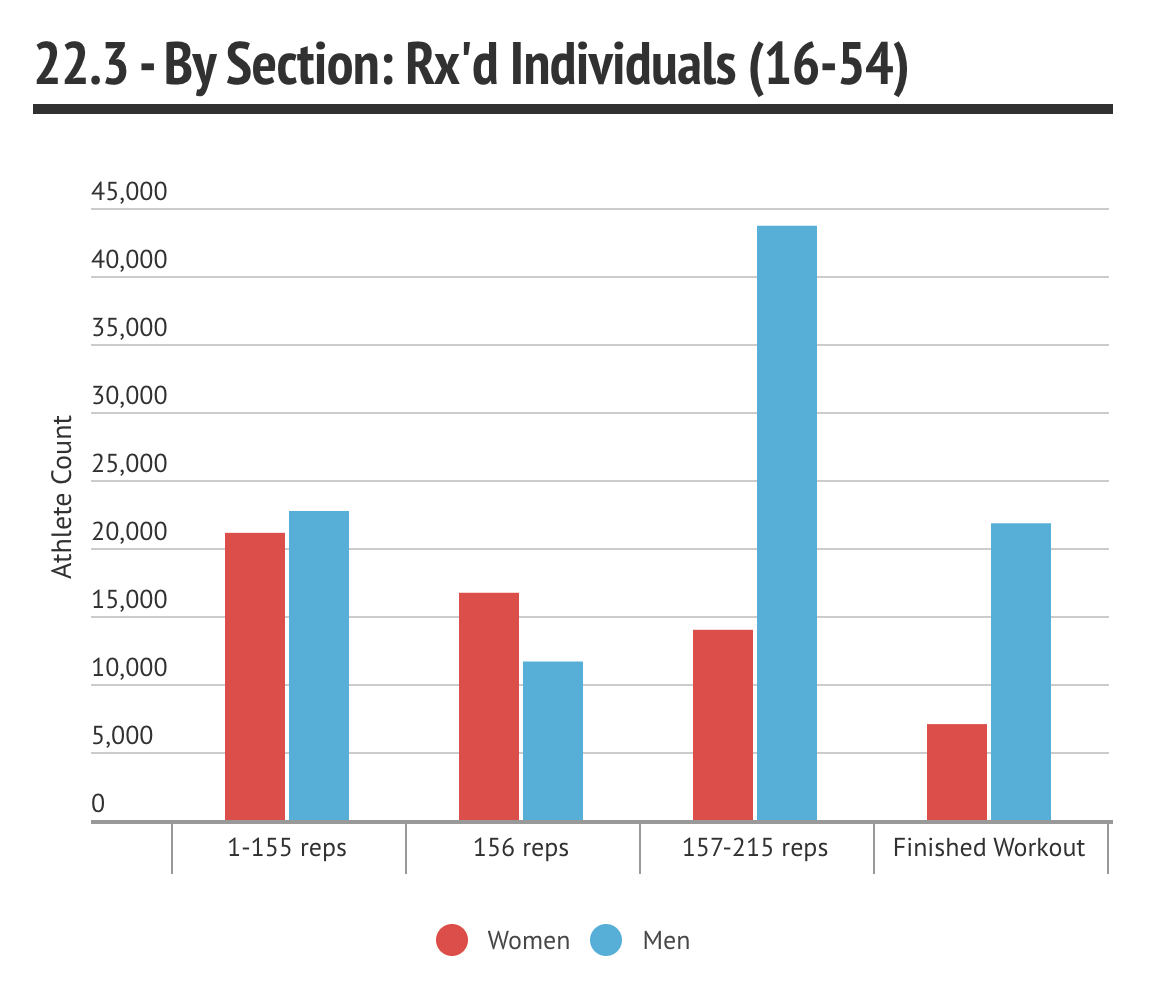 The double-under volume was relatively low in this workout and didn’t appear to be a major blocker this year. The low volume also meant the time it took to complete each set of double-unders was low compared to the other movements, with very few athletes finishing their workout on that movement.

Looking at the 22.3 distribution below, we can see that it is not smooth like we saw in prior weeks, likely due to the workout format and movement blockers. The scores are highly concentrated around the 18 thrusters and 15 bar muscle-ups for both men and women. 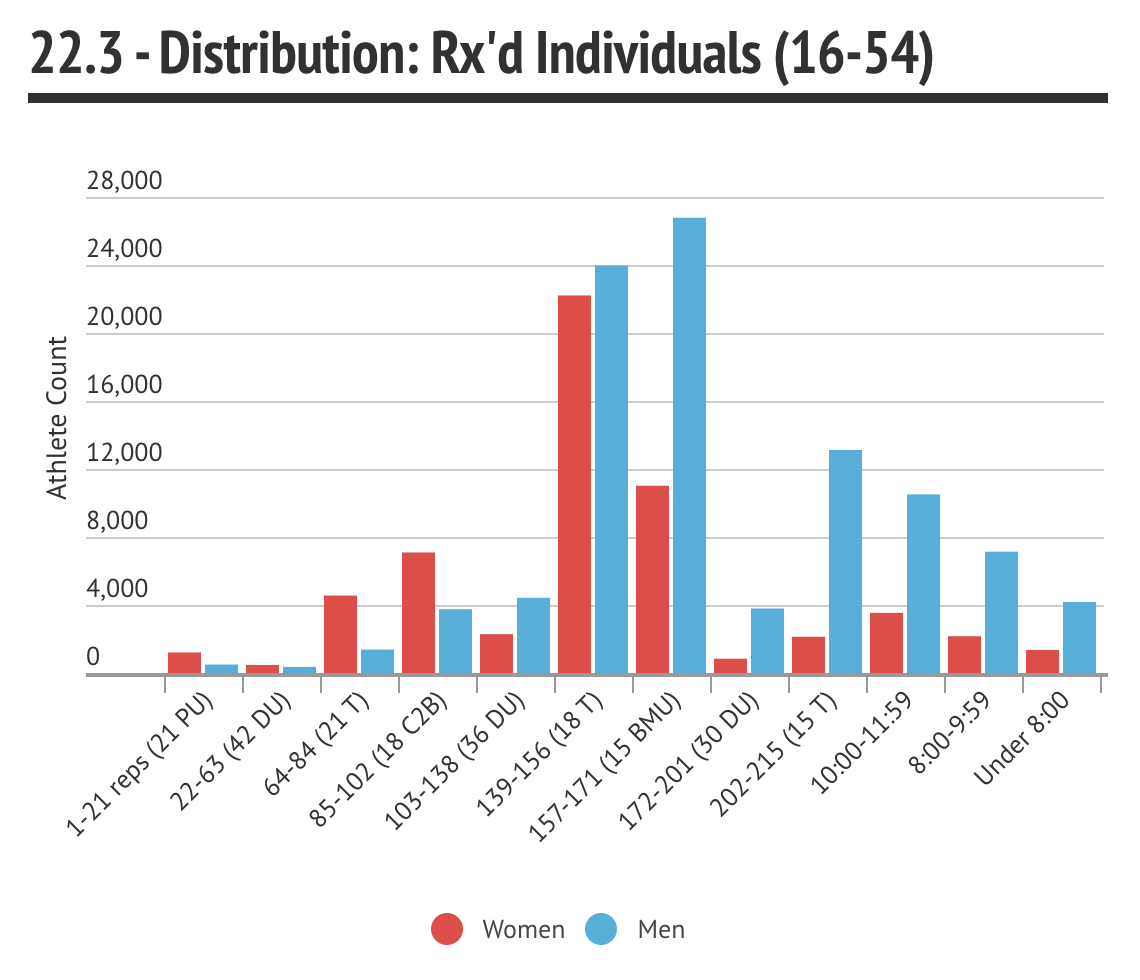 Below are percentile tables for individual, masters, teenage, and adaptive divisions with details for each version of the workout. You can see the breakdown of how many reps or what time it took to achieve a particular percentile. For example, for Rx’d women (18-34), you needed a score of 166 reps to get into the 75th percentile.

These percentiles compare you against your division and workout version, which is different from your overall division percentile (compared against all versions). 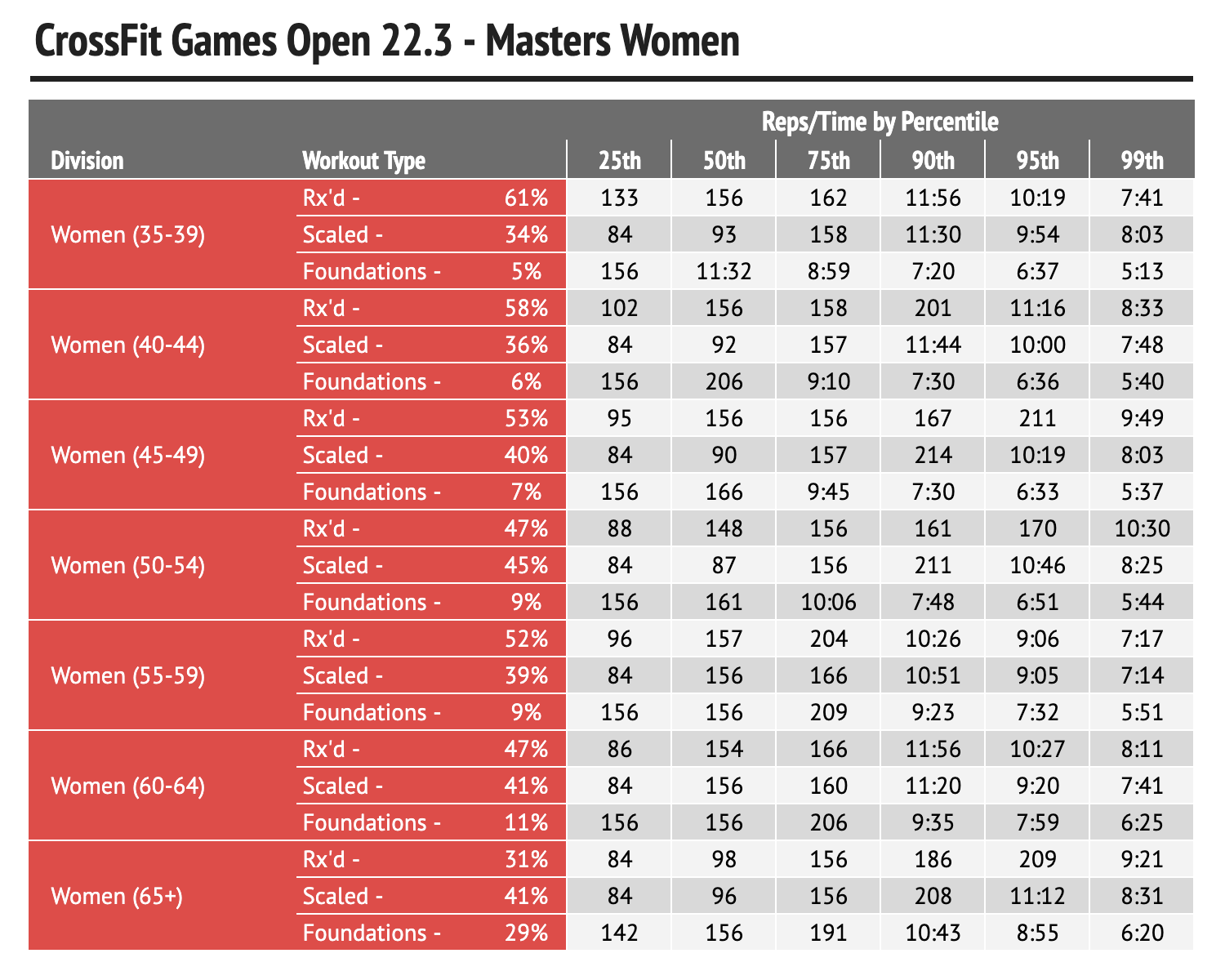 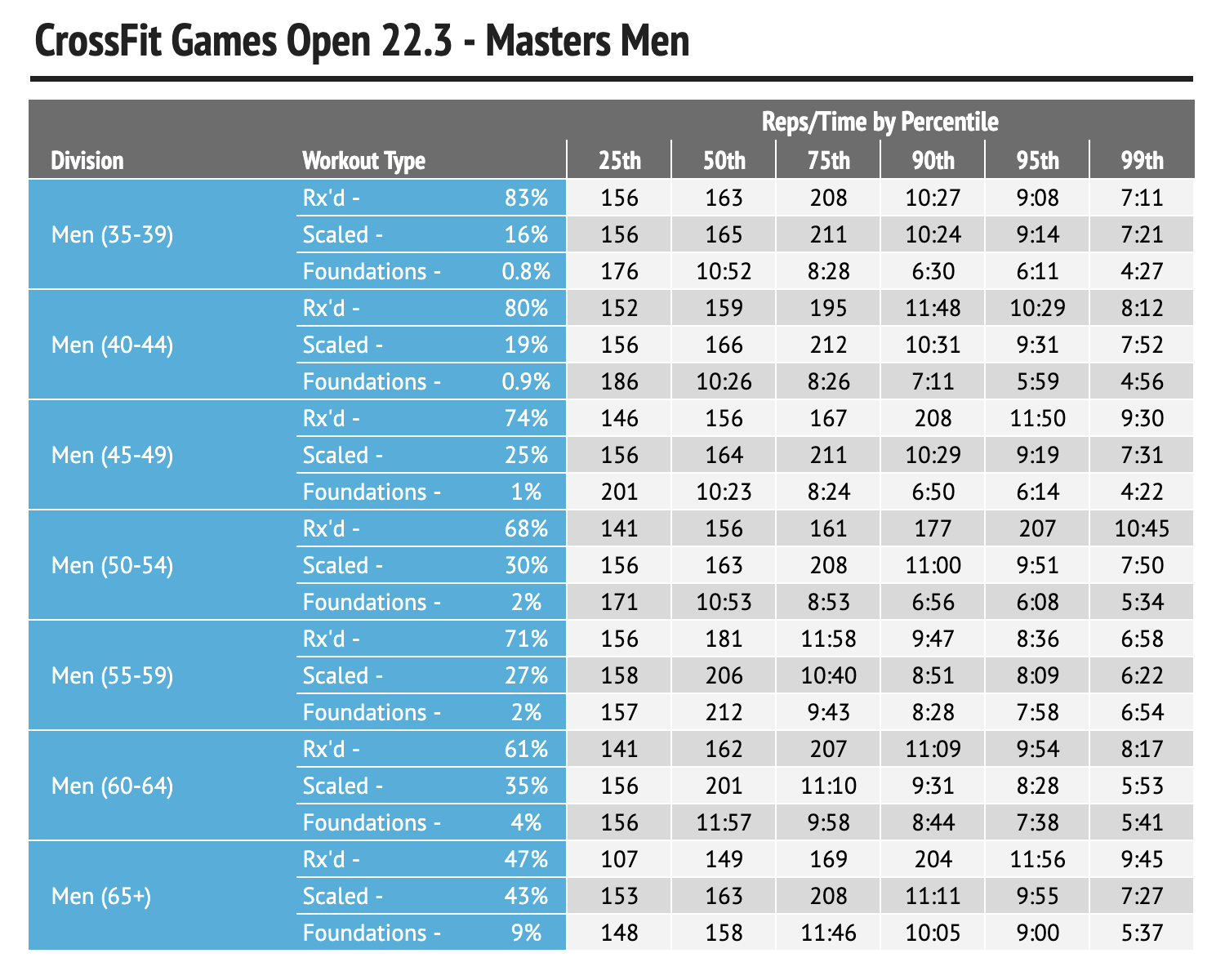 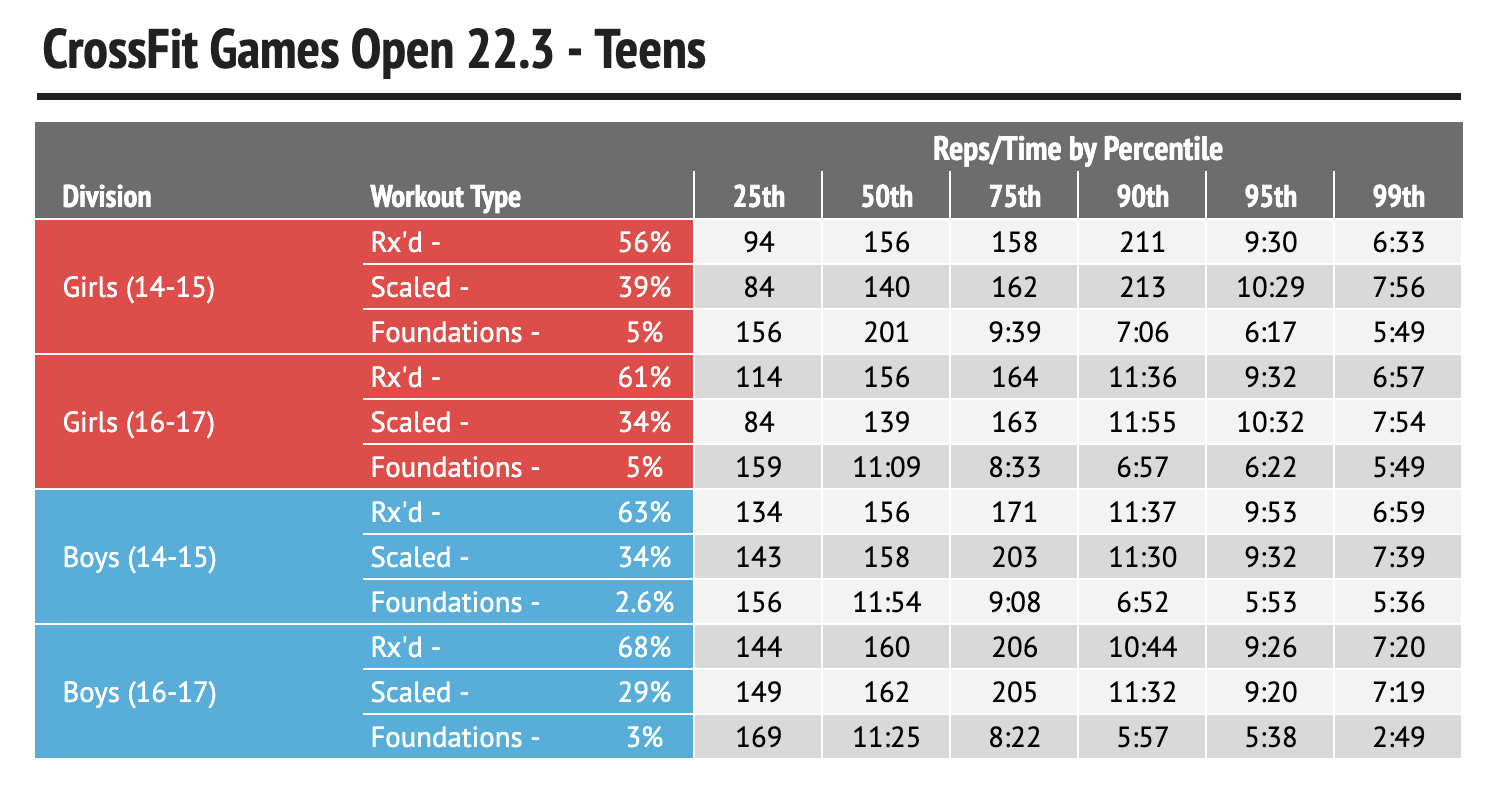 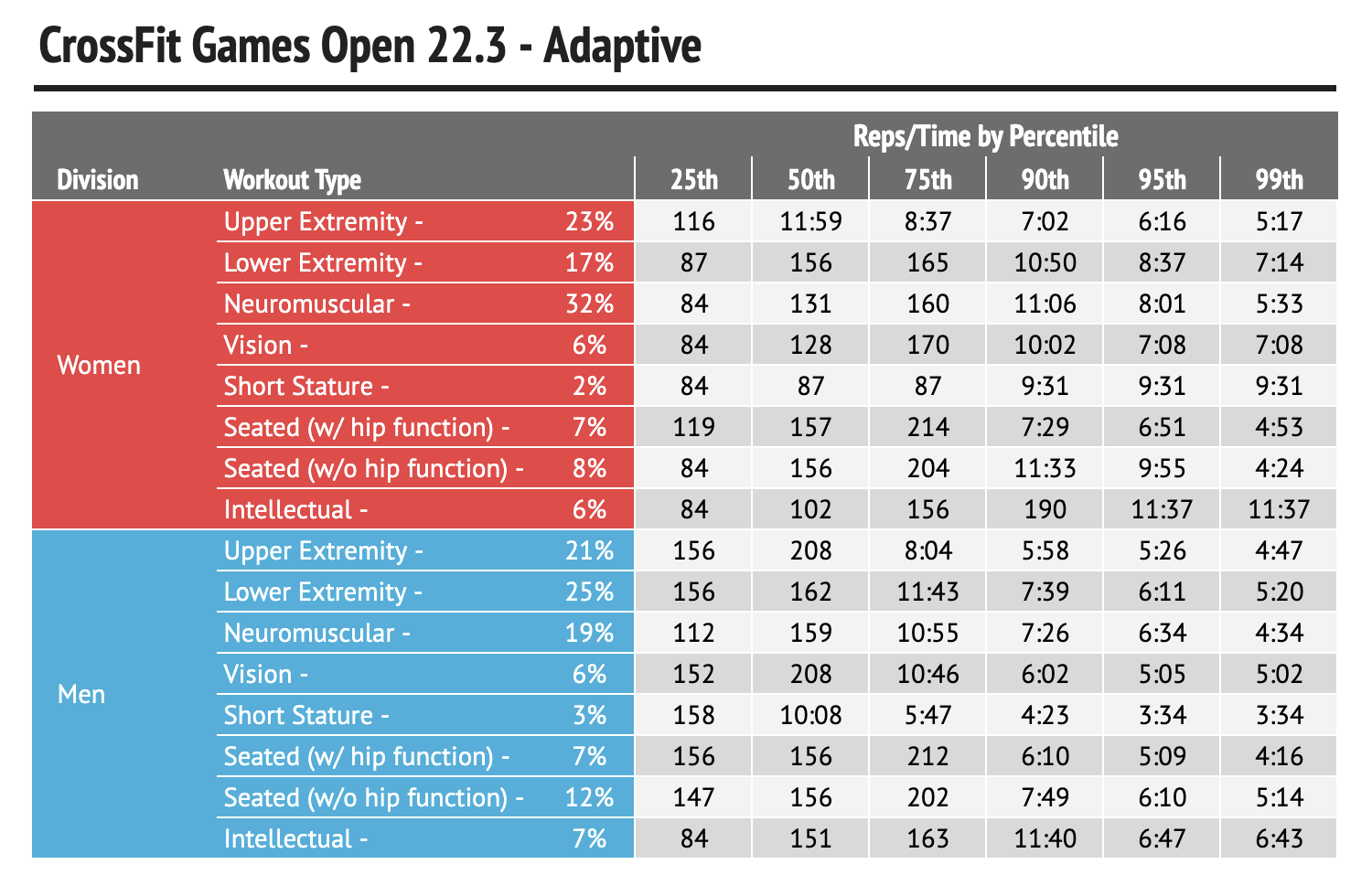