The second workout of the 2022 NOBULL CrossFit Open was a couplet of deadlifts and bar-facing burpees that followed a pyramid rep scheme and included a 10-minute time cap.

The deadlift weighed in at 155/225 lb for the Rx’d version, which is the same as the benchmark workout Diane and proved to be manageable for most athletes. Paired with another simple yet painful movement, the deadlift joined with the bar-facing burpee to make for another very accessible but deceptively potent Open workout. Even the pyramid rep scheme progressed gently before slapping you in the face somewhere around the round of 10s.

For 22.2, we’ll look again at performance among the top 10 countries by participation. Athletes aged 16-54 performed the same Rx’d and scaled versions of the workout, so we included numbers from these age groups in the chart below.

Performing more than 158 reps (past the 7s on the way back down) of the Rx’d version of the workout was something only 12% of athletes accomplished. We’ll use that as the threshold to compare relative competitiveness among the top 10 countries. Based on this metric, Canada was the most competitive at 14.2%, followed by Spain at 12.8% and Italy at 12.1%.

If we compare the percentage of a country’s athletes who performed the Rx’d version, Australia had the highest share for the second week in a row with nearly 85%. 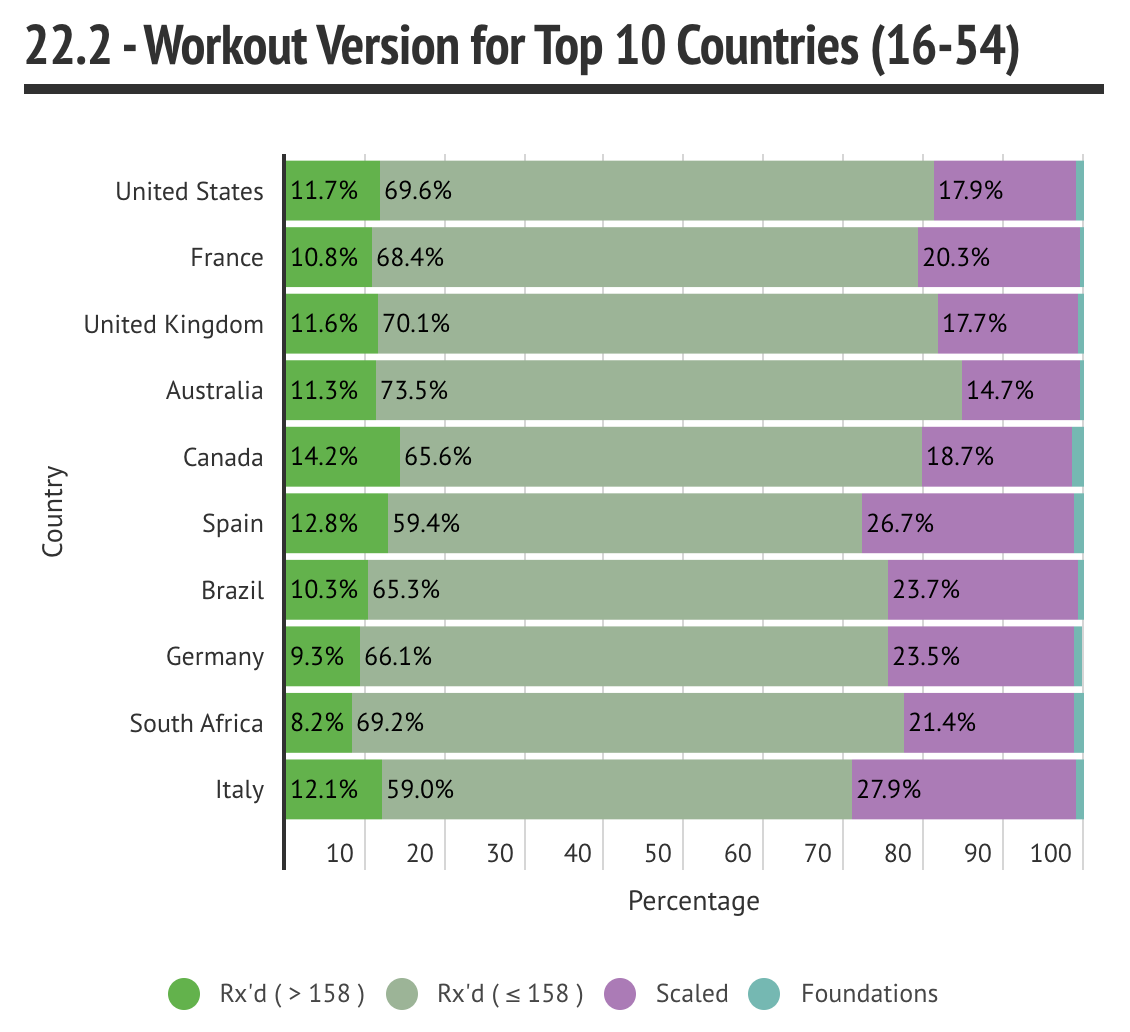 For masters divisions, 7% were able to surpass 158 Rx’d reps compared to 14% for teens and 17% for adaptive athletes. 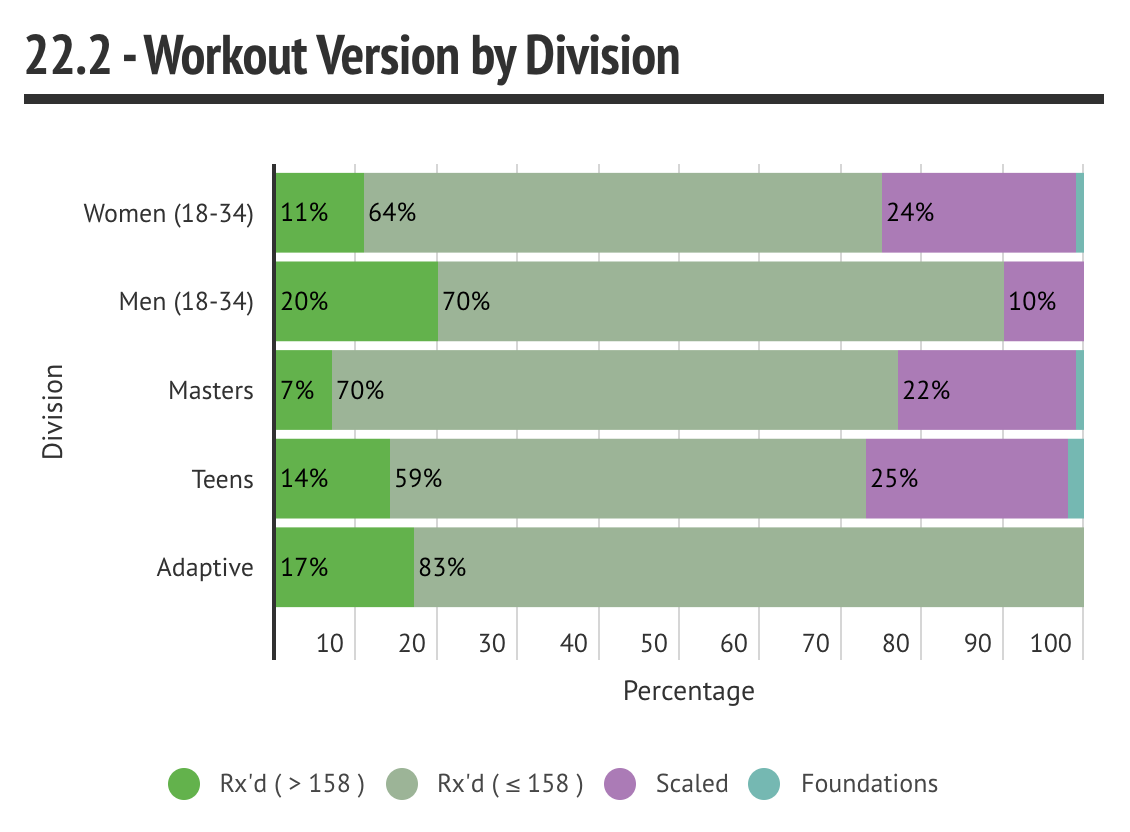 Again, since there were no big roadblocks in this workout, we see a nice, smooth distribution of scores across the rounds for Rx’d men and women (18-34). There were large concentrations of athletes who finished during the 10s, 9s, and 8s (90-144 reps), with the second round of 9s having the most finishers for both genders. 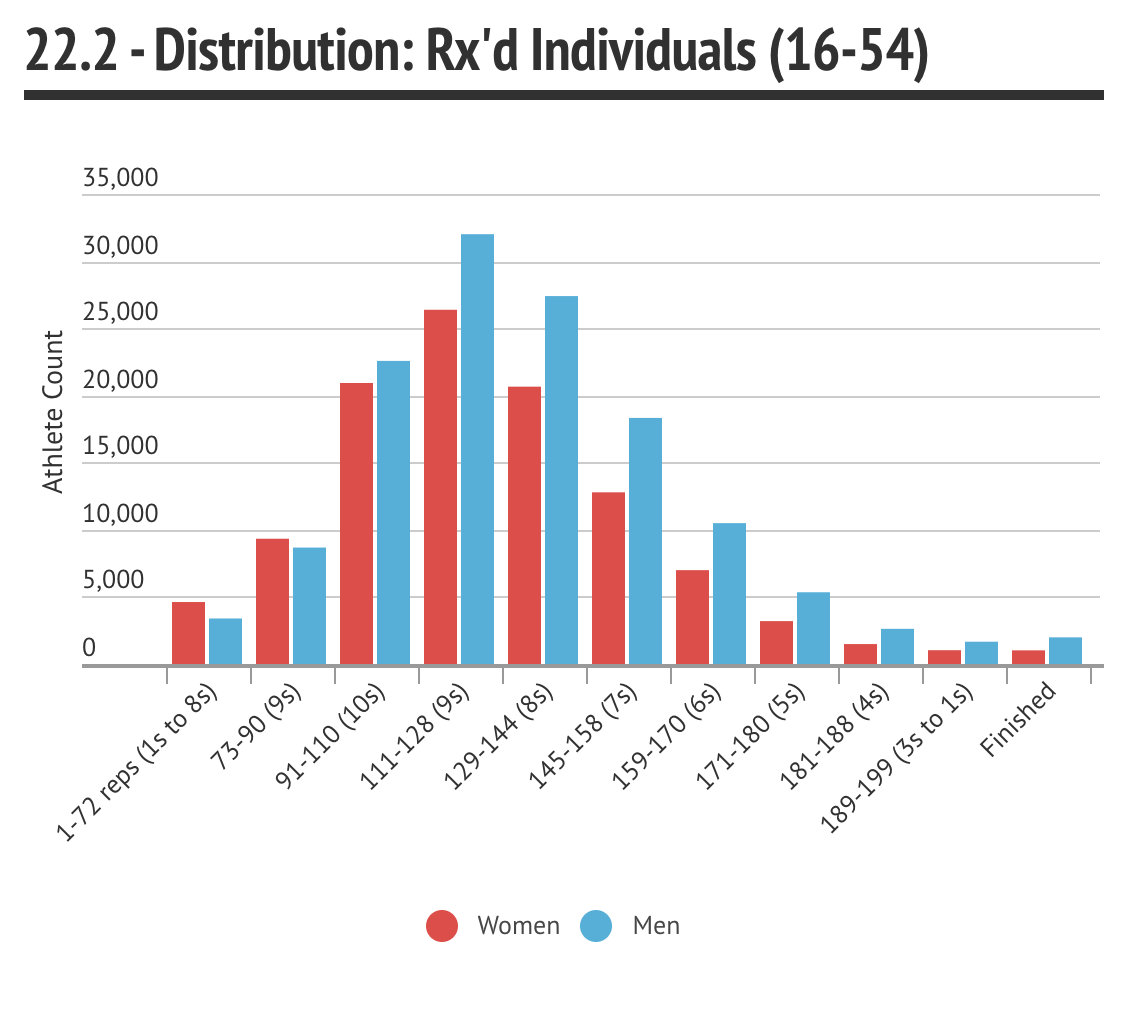 Below are percentile tables for individual, masters, teenager, and adaptive divisions with details for each version of the workout. You can see the breakdown of how many reps or what time it took to achieve a particular percentile. For example, for Scaled Women 18-34, you needed a score of 165 reps to get into the 90th percentile.

These percentiles compare you against your division and workout version, which is different from your overall division percentile (compared against all versions). 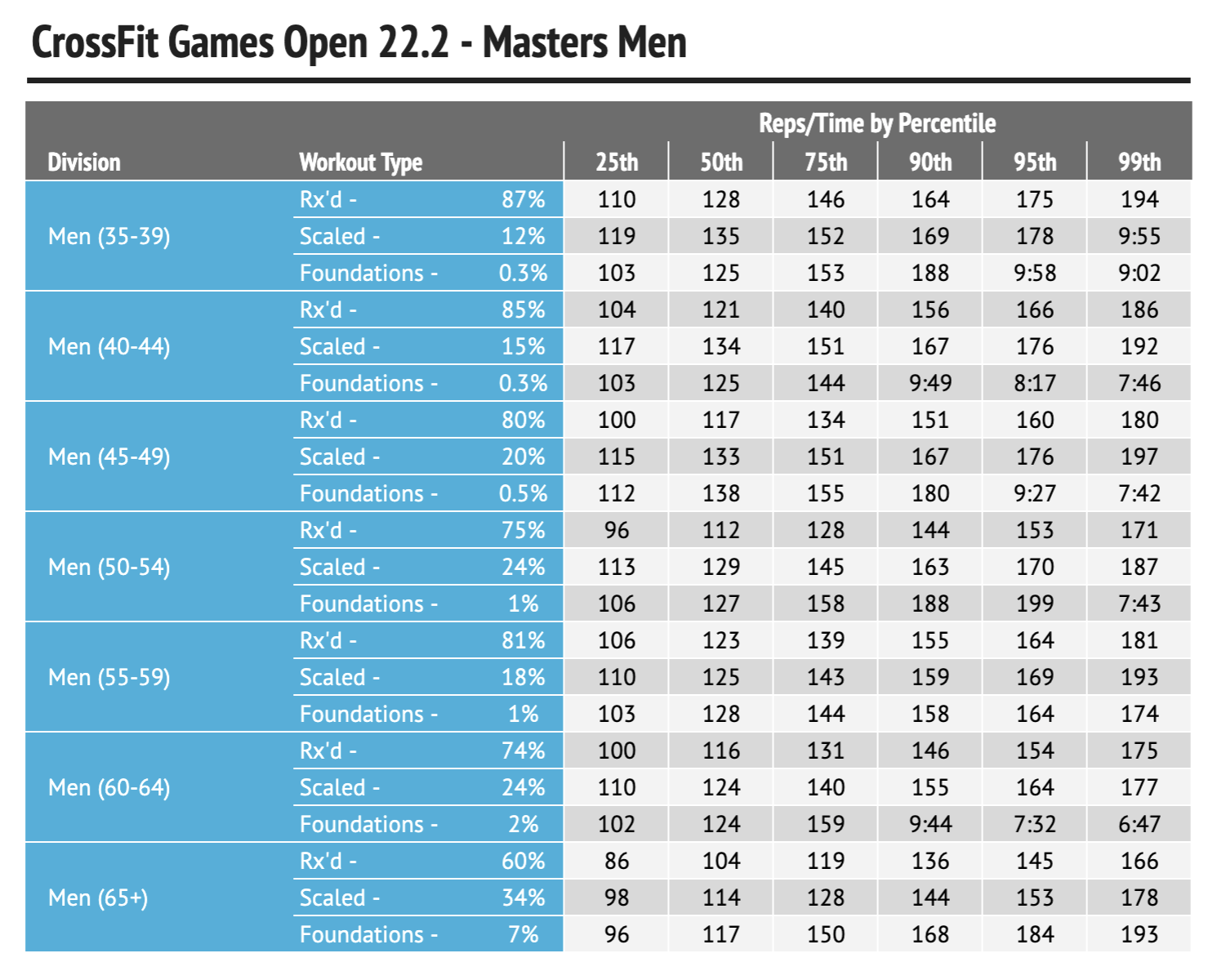 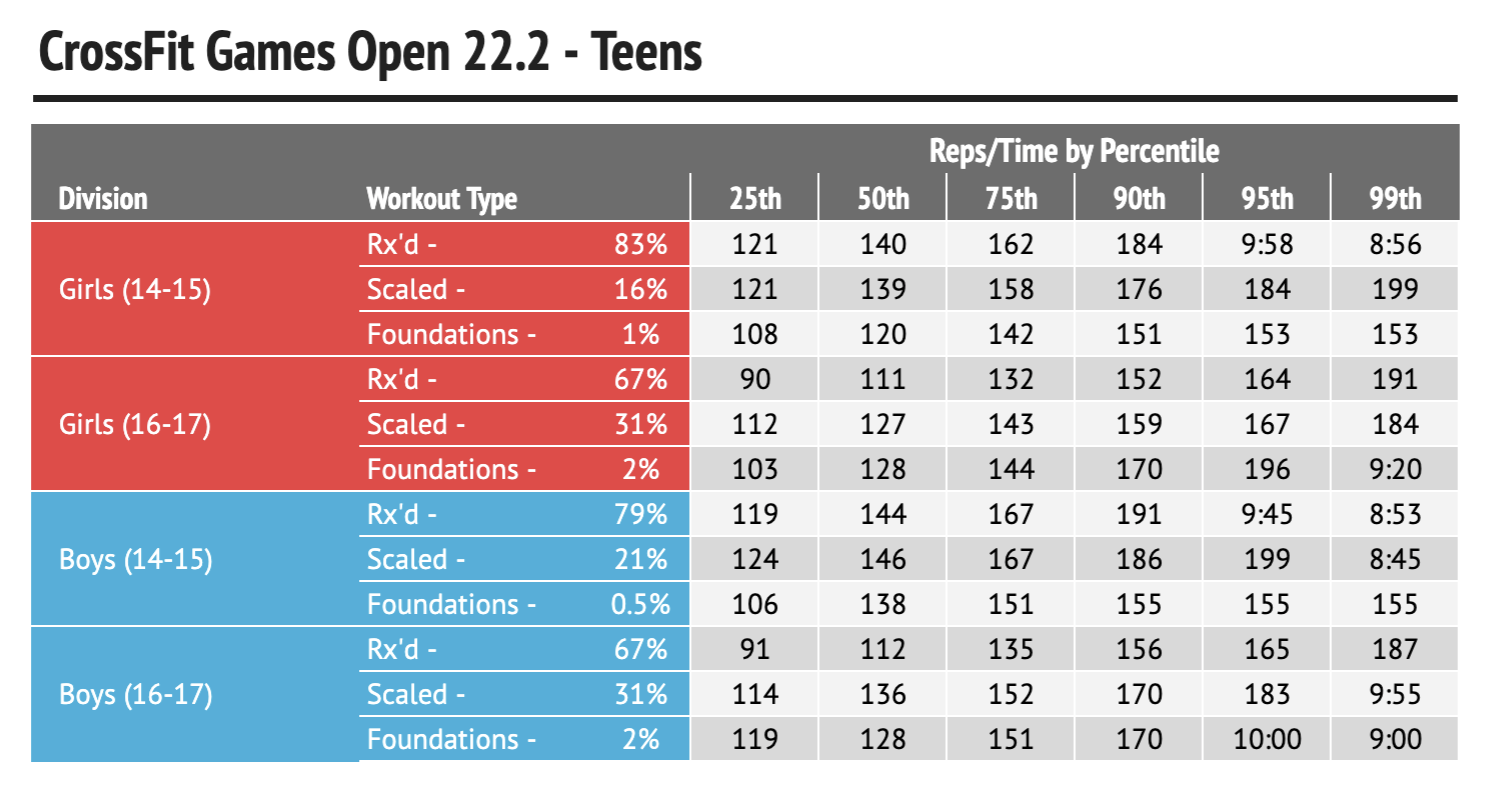 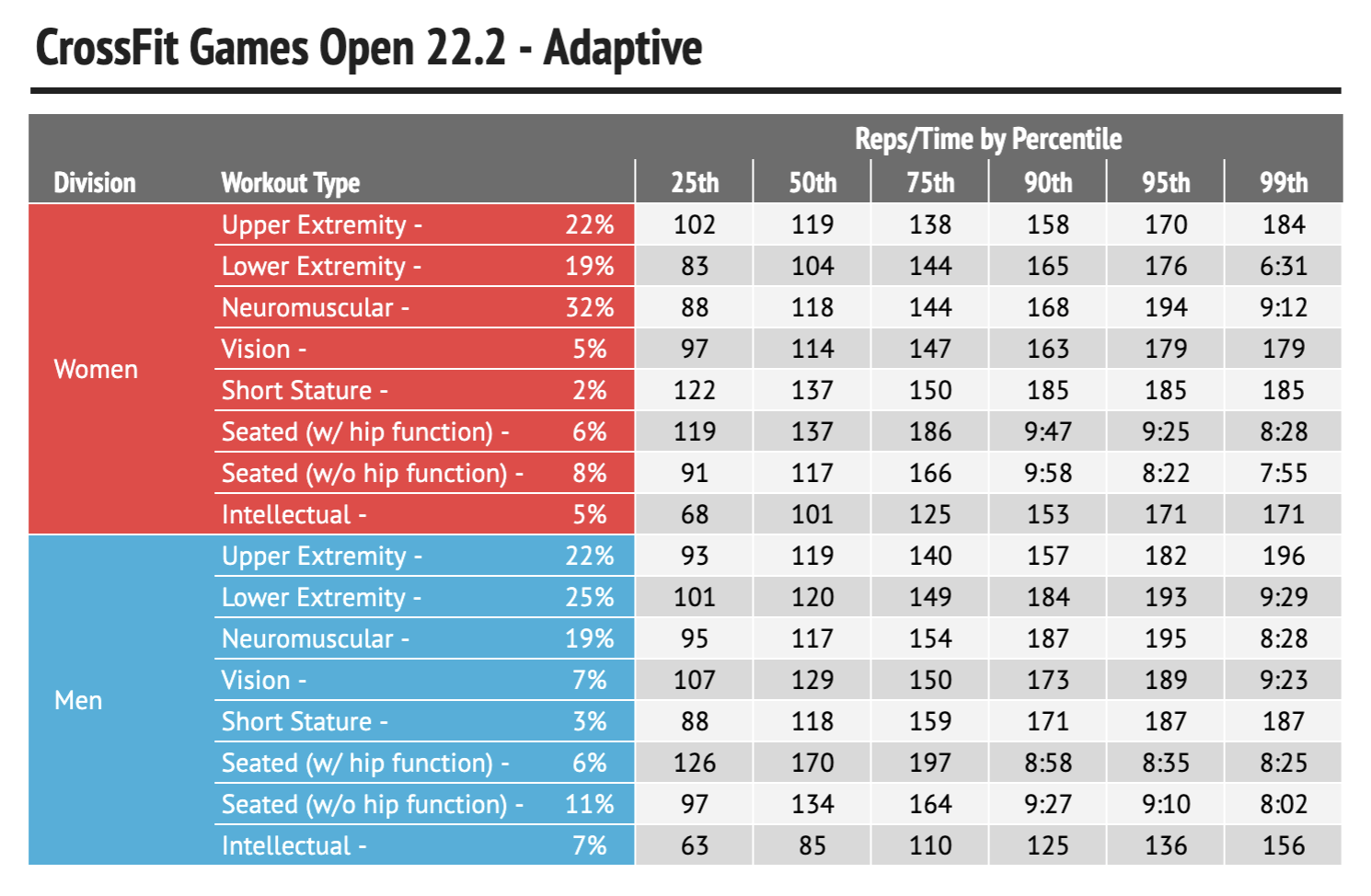