The first week of the 2022 NOBULL CrossFit Open gave us a 15-minute AMRAP of wall walks, dumbbell snatches, and box jump-overs.

After their debut in 2021, wall walks made their return but in a much kinder, gentler expression. Following the trauma of 15 wall walks in 21.1, the 3 consistent wall walks per round in 22.1 were a welcome treat. And the fixed-distance hand lines, though challenging for some, were a helpful logistical adjustment for gym owners.

The dumbbell snatches were accessible for most athletes, as were the box jump-overs. The new step-down standard took some adjustment for athletes used to the rhythm of rebounding, but athletes’ Achilles were probably appreciative of the change.

Below are the top 10 countries in the Open by participation. Overall, Open registration saw a lot of international growth this year, with nearly 60 percent of competitors hailing from outside the United States.

France and the United Kingdom both nearly doubled their participation from 2021, putting them in second and third place, respectively. Australia lost some share, dropping from second to fourth in the rankings. Italy joined the top 10 this year, gaining two spots from last year and bumping Sweden to 13th place. 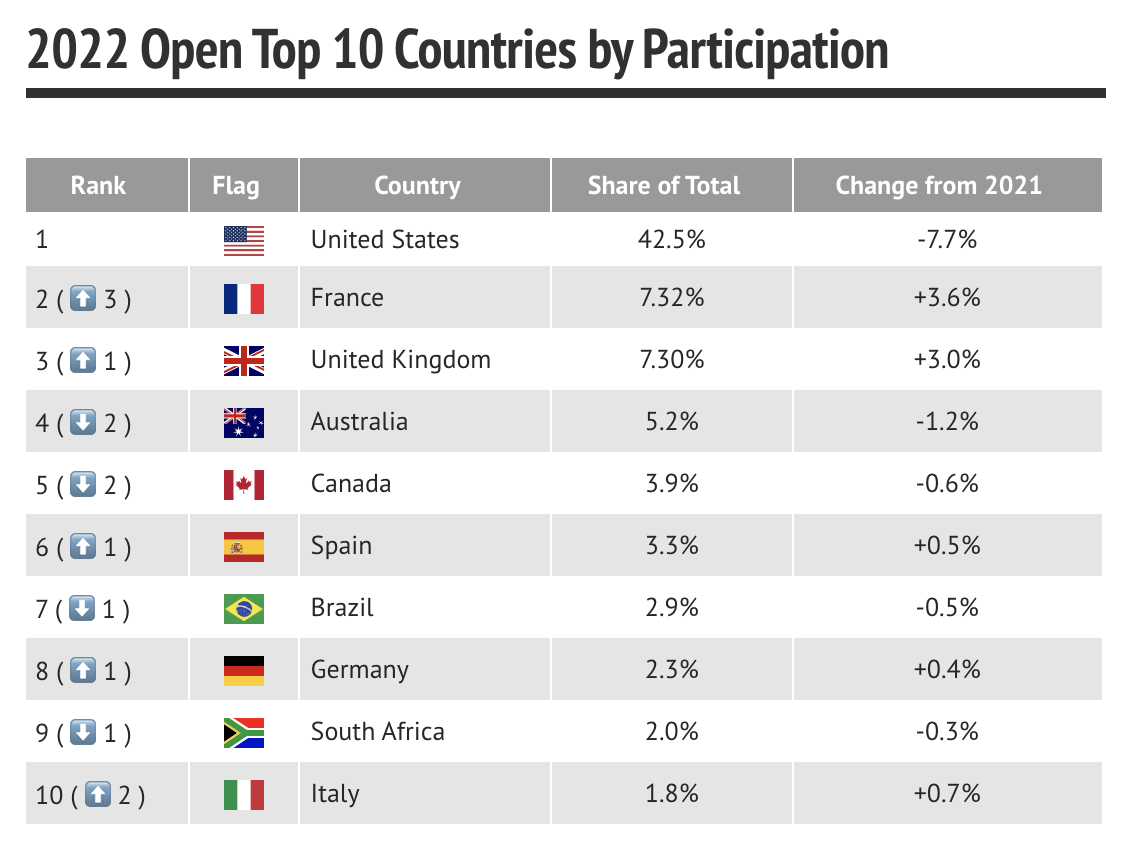 Looking at what share of a country’s athletes performed the workout as Rx’d is a good way to compare relative competitiveness among countries of different sizes and participation rates. Athletes aged 16-54 performed the same Rx’d version of 22.1, so we included numbers from these age groups in the chart below.

We split the Rx’d scores at 180 reps (6 full rounds) to get a sense of how many high performers each country had. Based on that threshold, South Africa performed the best with 32 percent of its athletes completing 6 full rounds or more.

If we compare the percentage of athletes performing the Rx’d version, Australia had the highest number in the top 10 countries with 81 percent. 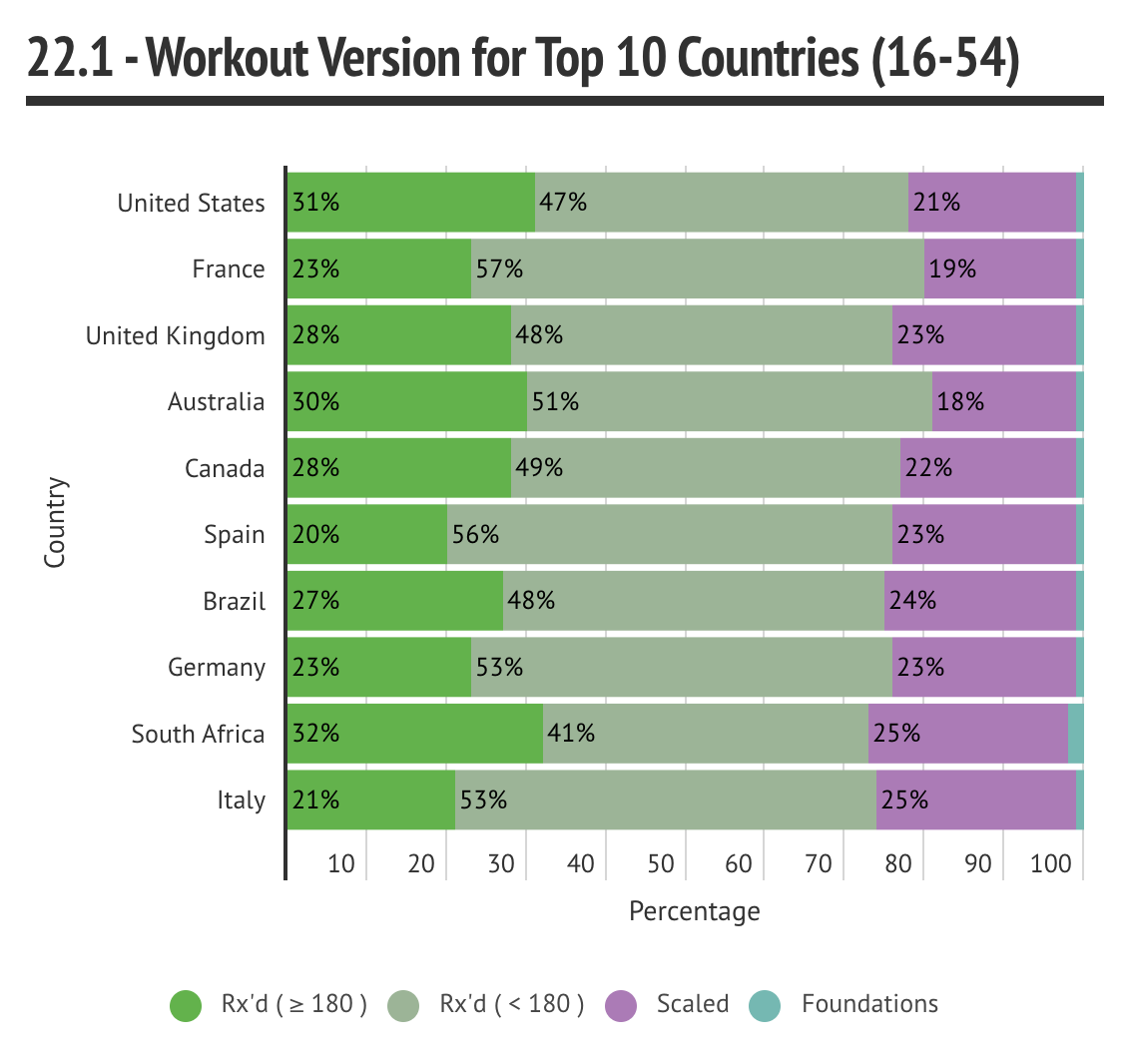 The difference in Rx’d percentages is likely due to two main factors. First, double-unders are a higher-skill movement that many athletes still struggle with. Second, 21.1 was the first time we saw wall walks in the Open, so most athletes had no experience with that skill prior to the workout. Now that we’ve had a year to work on them (hopefully), more athletes felt confident in tackling them.

The eight adaptive divisions returned for 2022, with each division getting a tailored Rx’d version of 22.1. See the table at the end of the article for percentile breakdowns of each adaptive division. 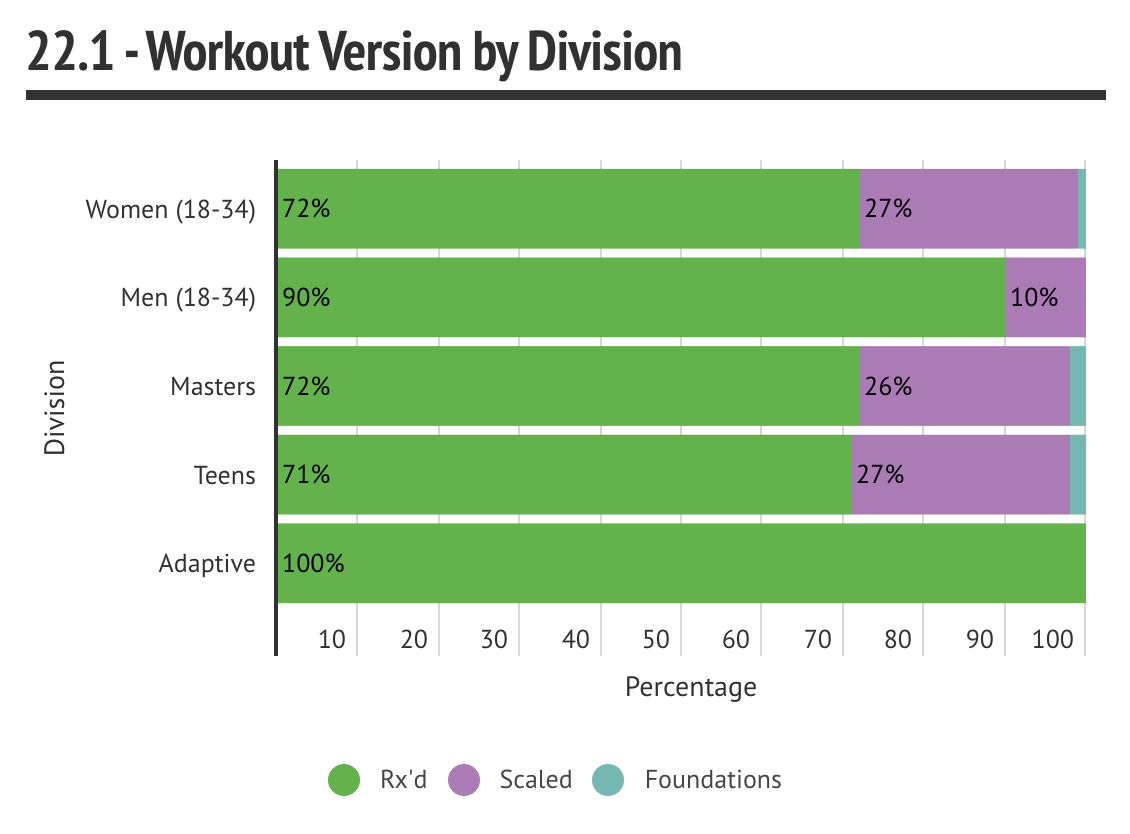 Since this was an AMRAP with the same rep scheme each round, we can see a nice smooth distribution of scores in the chart below. The median score for women 16-54 was 182 reps, while the median for men 16-54 was 200 reps.

At the upper end of the spectrum, we see it was extremely challenging for an athlete to get beyond 10 full rounds (300 reps). Fewer than 3 percent of men and women 16-54 made it past that point during the 15 minutes.

Unsurprisingly, a tiny fraction (0.4%) of absolute monsters got beyond 11 full rounds (330 reps). 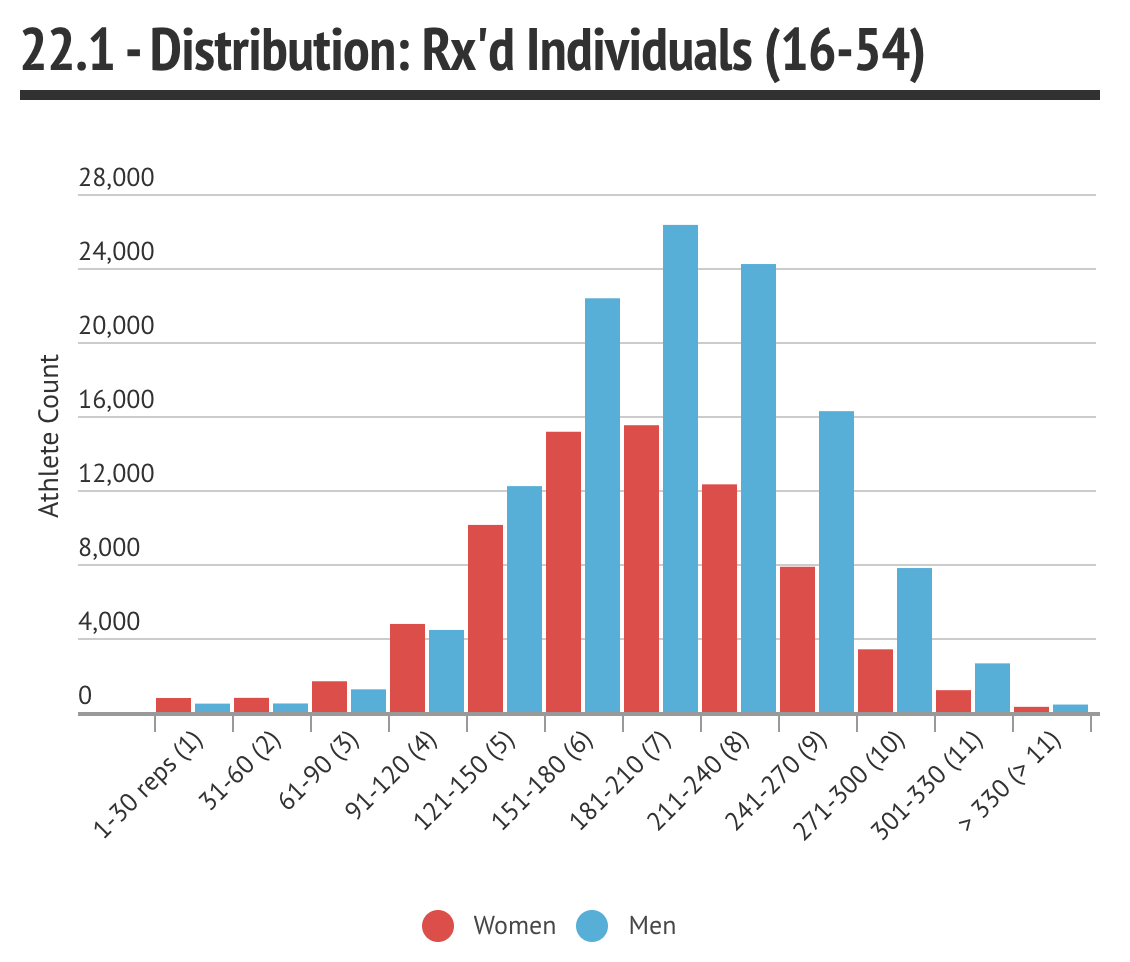 Below are percentile tables for individuals, masters, teenagers, and adaptive divisions with details for each version of the workout. You can see the breakdown of how many reps it took to achieve a particular percentile. For example, for Rx’d men 18-34, you needed a score of 180 reps to get into the 25th percentile.

These percentiles are comparing you against your division and workout version, which is different from your overall division percentile (compared against all versions). 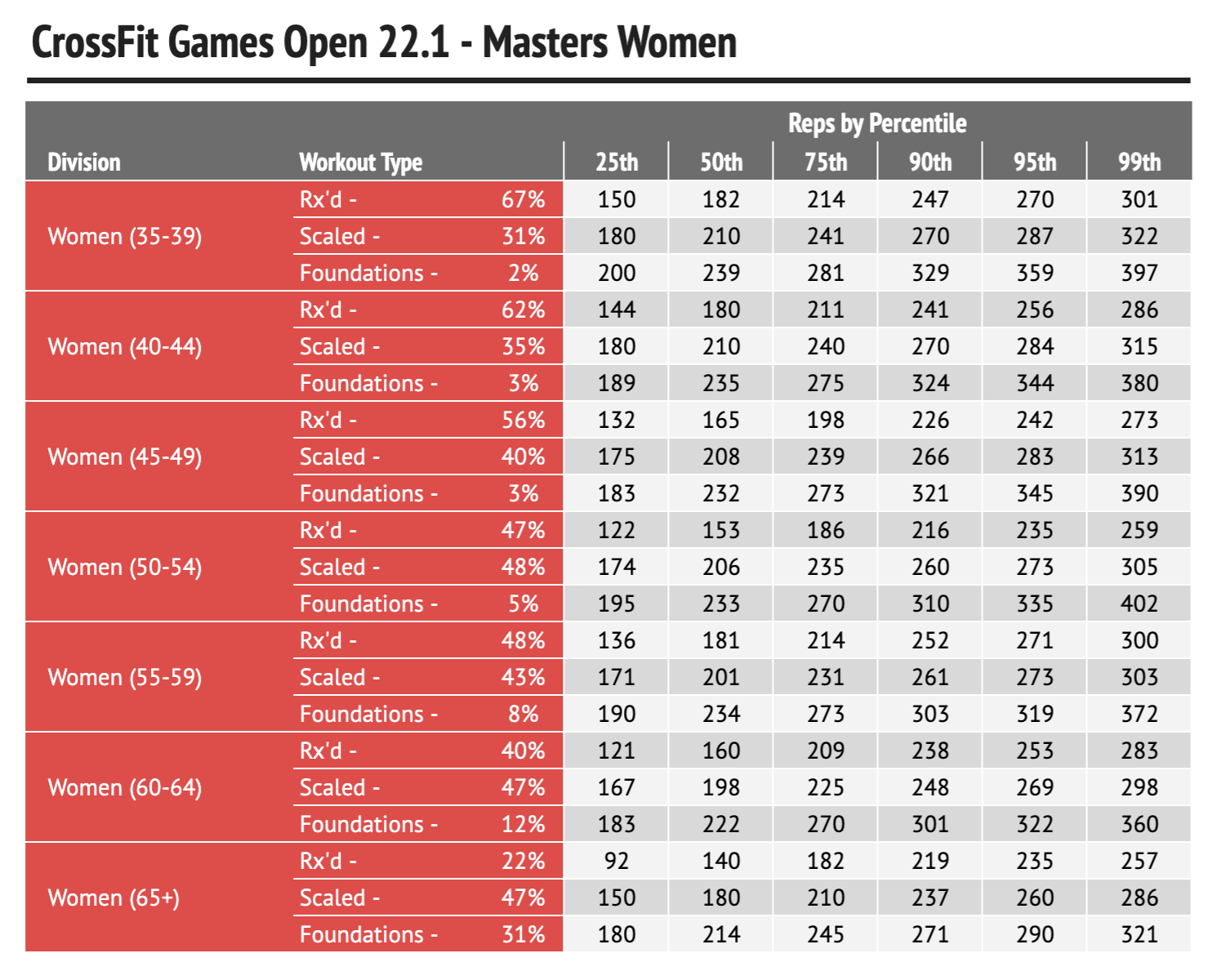 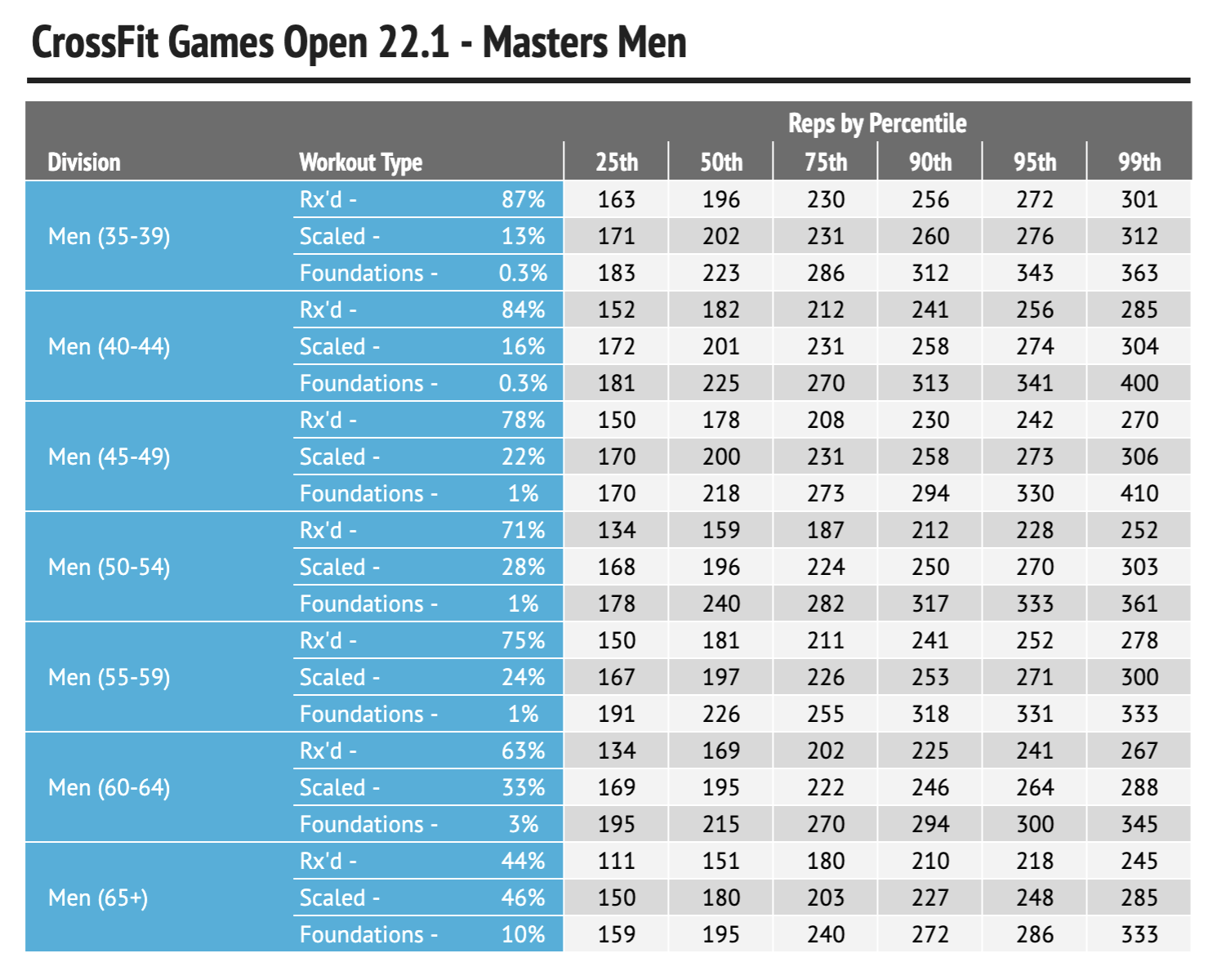 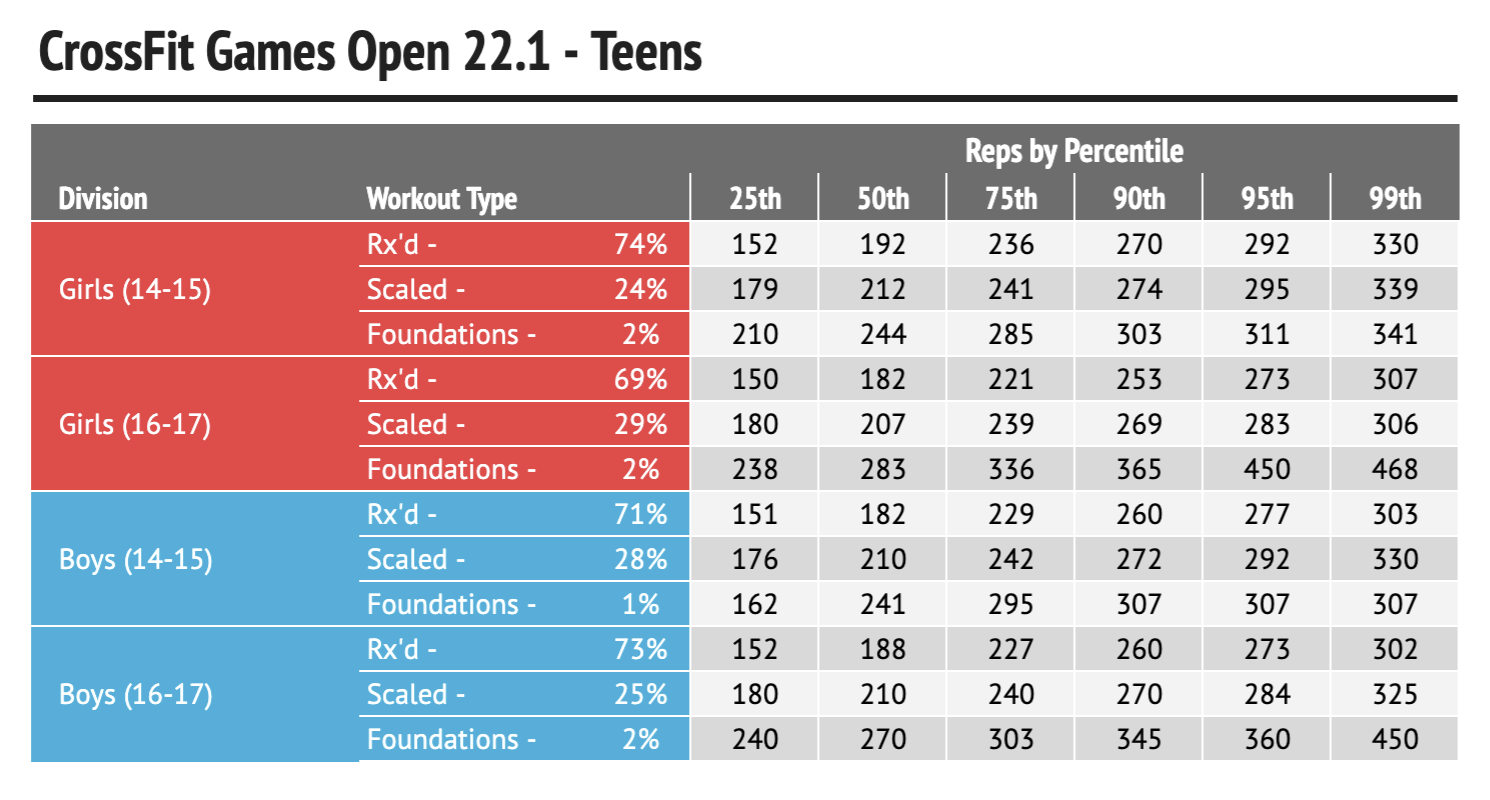 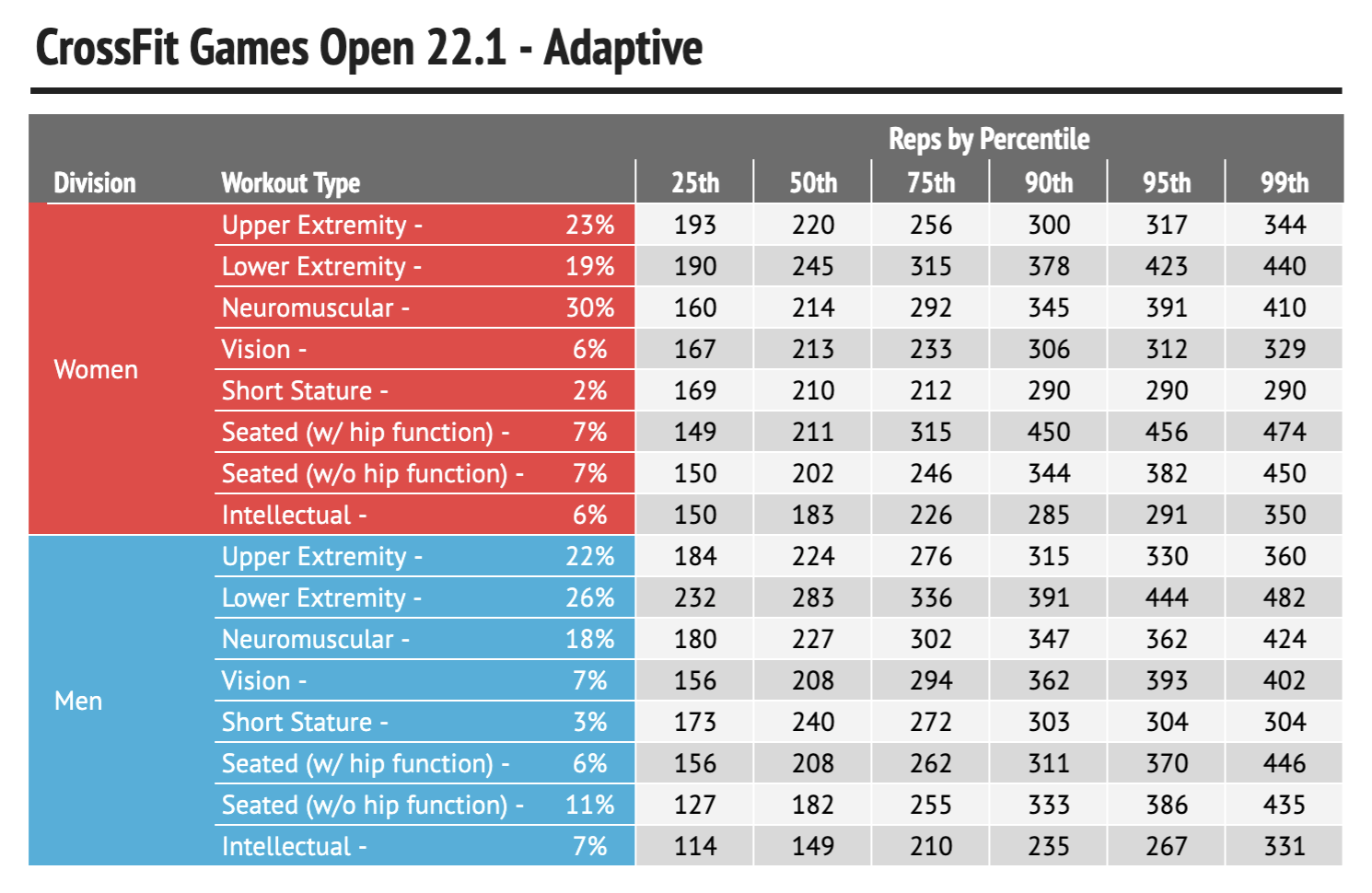