The second workout of the 2021 Open was a repeat of 17.1. The workout contained a total of 150 dumbbell snatches and 75 burpee box jump-overs with a 20-minute time cap. Although there were no high-skill movements in this workout, the ascending rep scheme on the snatches was just plain rude. We all know the motivation and hope a 50-40-30-20-10 rep scheme provides, with each subsequent round getting a little more manageable as fatigue sets in. This workout offered the polar opposite of that feeling.

What a difference four years makes! Across all divisions the scores on 21.2 were significantly higher than 17.1. Below is the percentile table for Rx’d individuals (18-34) for reference. As an example, the 90th percentiles for Rx’d women and men (18-34) each improved by about 2 full minutes.

For 21.2 we’re going to compare top country performance by looking at the percentage of athletes who completed the workout as Rx’d in under the time cap. The most competitive top 20 country by this metric was Sweden, with 63% of its athletes aged 16-54 completing the Rx’d workout within 20 minutes. Sweden was followed by the Russian Federation with 61%, Norway with 58%, New Zealand with 57%, and Mexico with 53%. 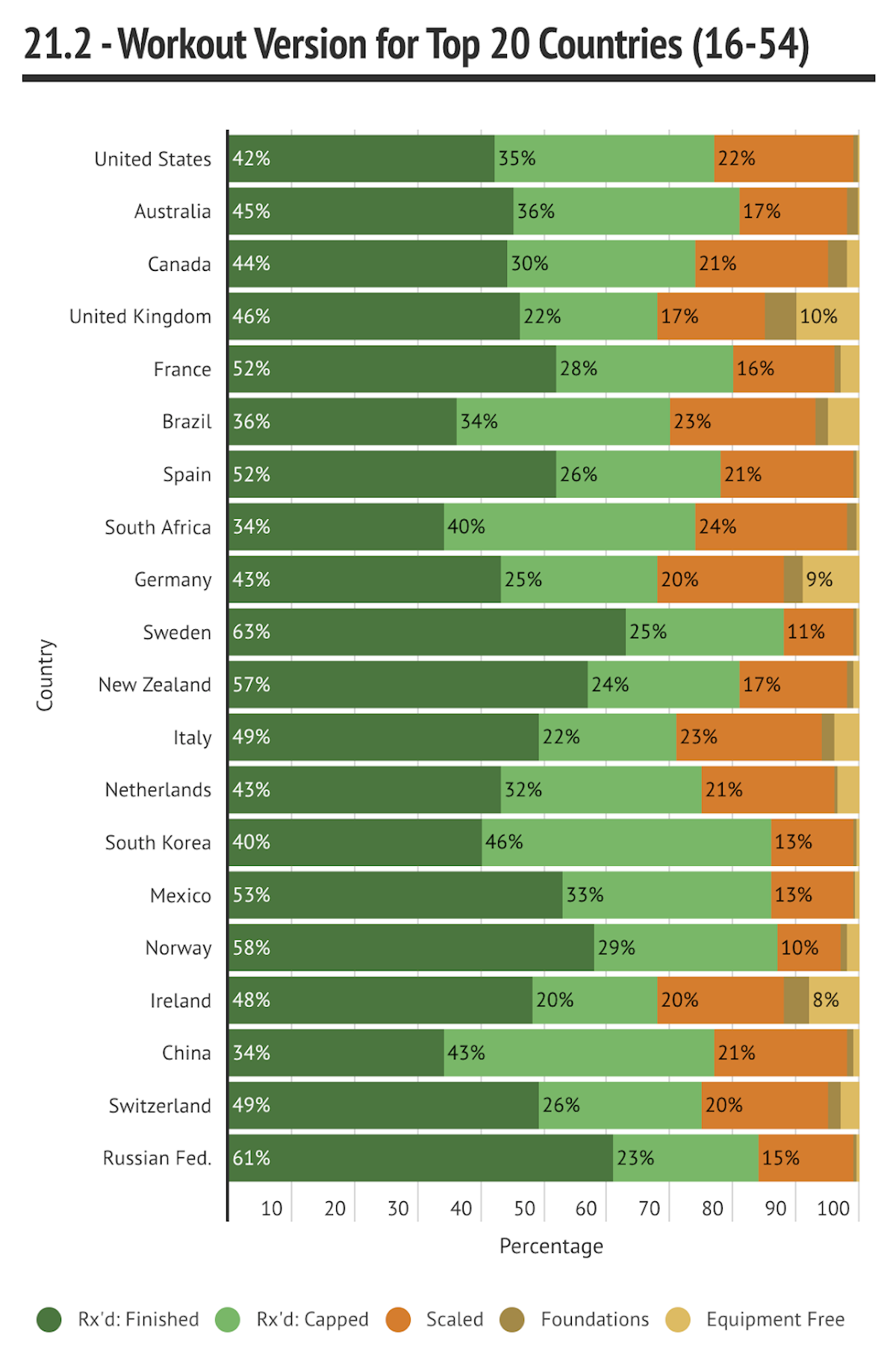 Looking at the adaptive divisions, 57% of the athletes were able to finish their workout under the time cap compared to 39% last week on 21.1. 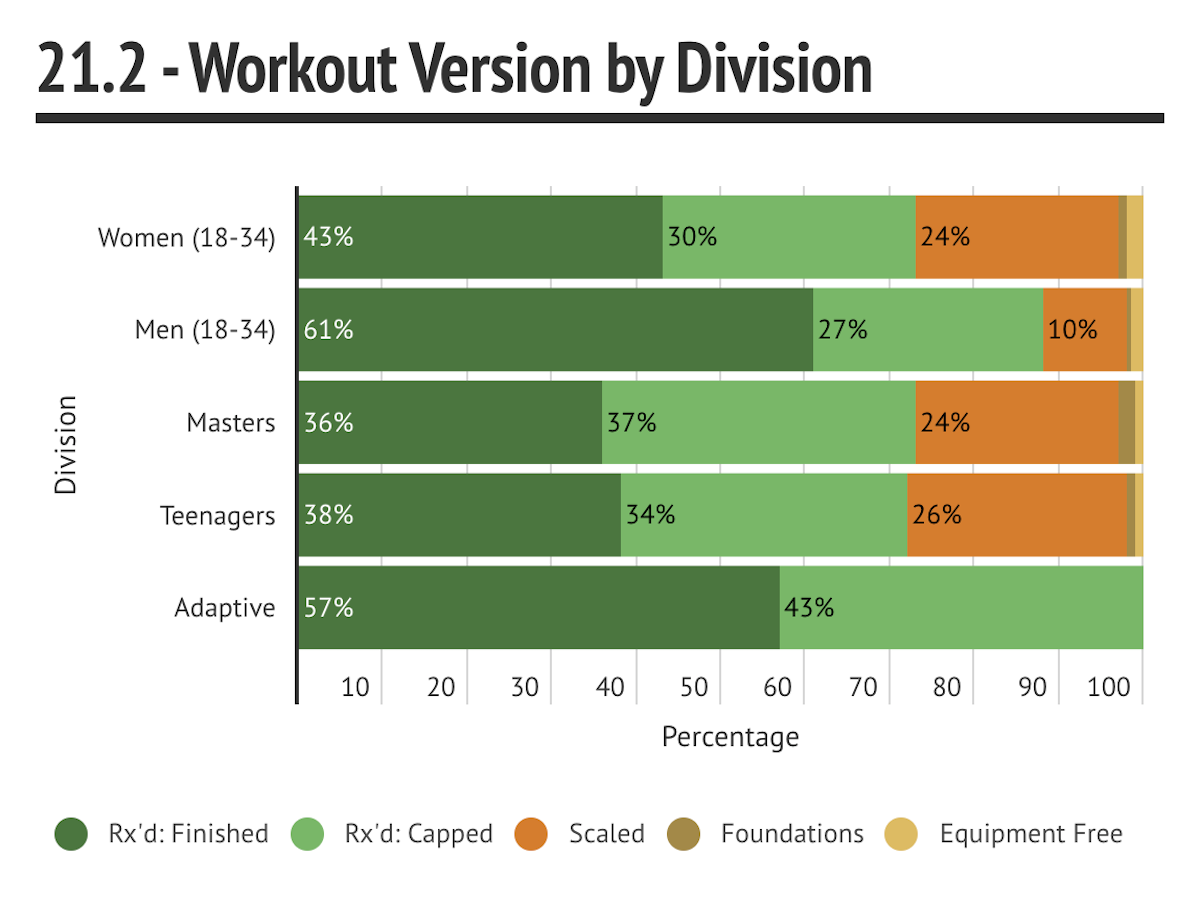 The distribution of scores for the Rx’d version of the workout was pretty smooth due to the lack of high-skill movements. The distribution below has buckets grouped by movement/rep ranges as well as time. You can see where you are in the distribution by finding the bucket your score falls in on the x-axis.

Although a few of the best athletes in the world were flirting with sub-9-minute scores, only a very small percentage of athletes finished in under 12 minutes. For both divisions in the chart, you can see that more than half the Rx’d athletes were able to finish in under 20 minutes. 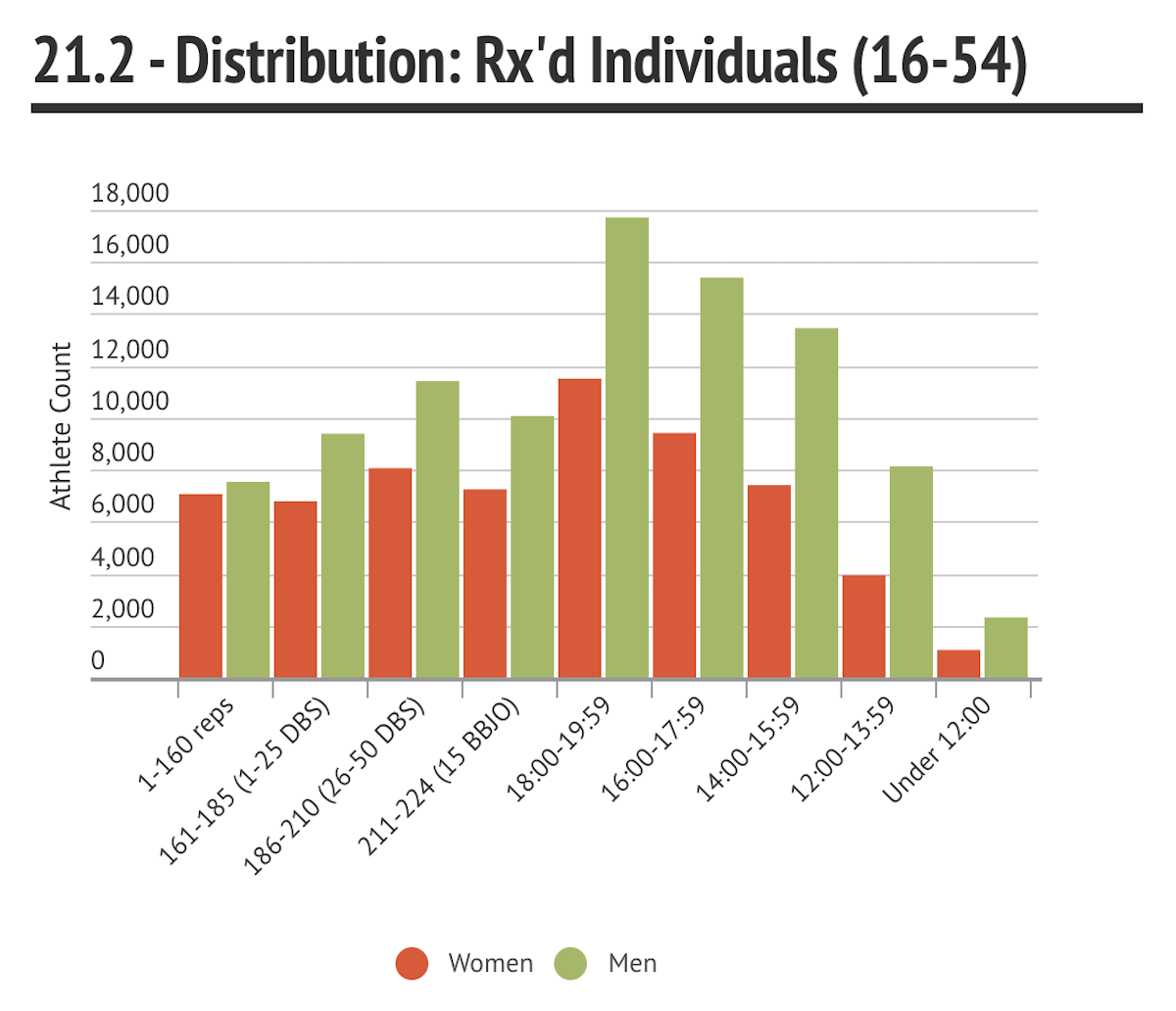 Below are percentile tables for individuals, teenagers, masters, and adaptive divisions, with details for each version of the workout. You can see the breakdown of how many reps or what time it took to achieve a particular percentile. For example, for scaled men (18-34), you needed a time of 16:46 to get into the 75th percentile. You can also see the percentage of athletes who performed each version in each division. 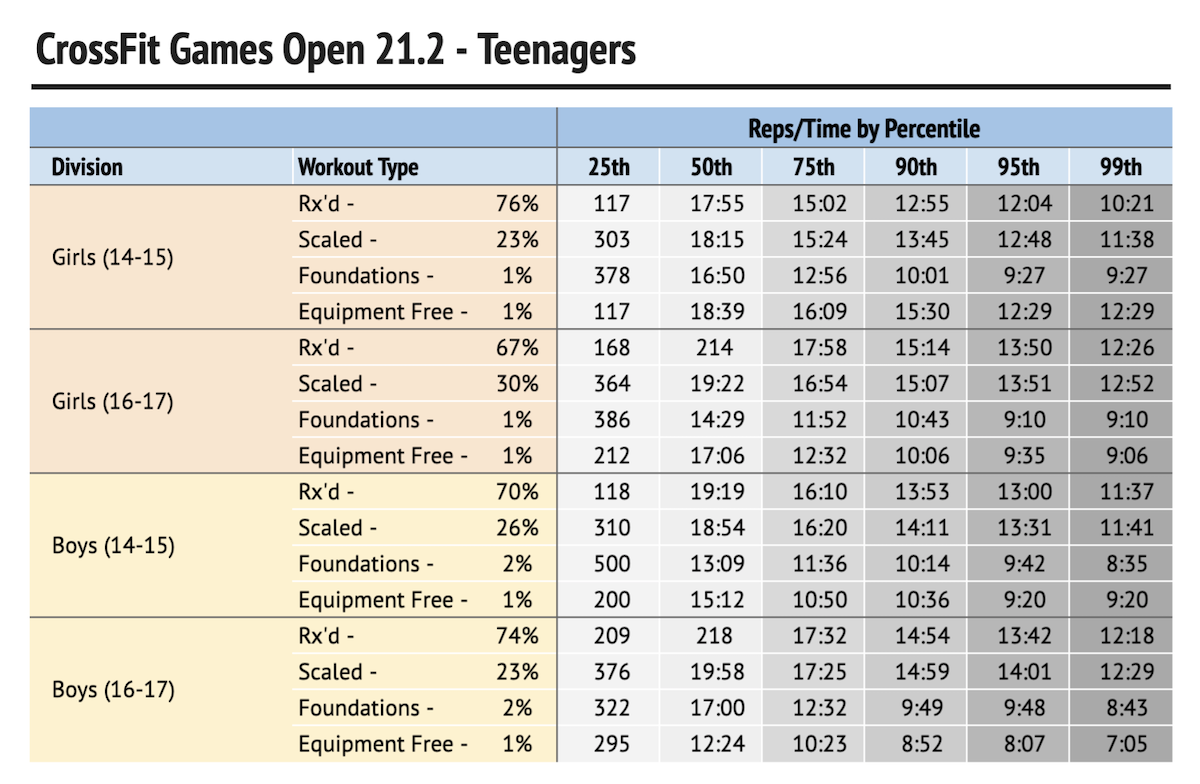 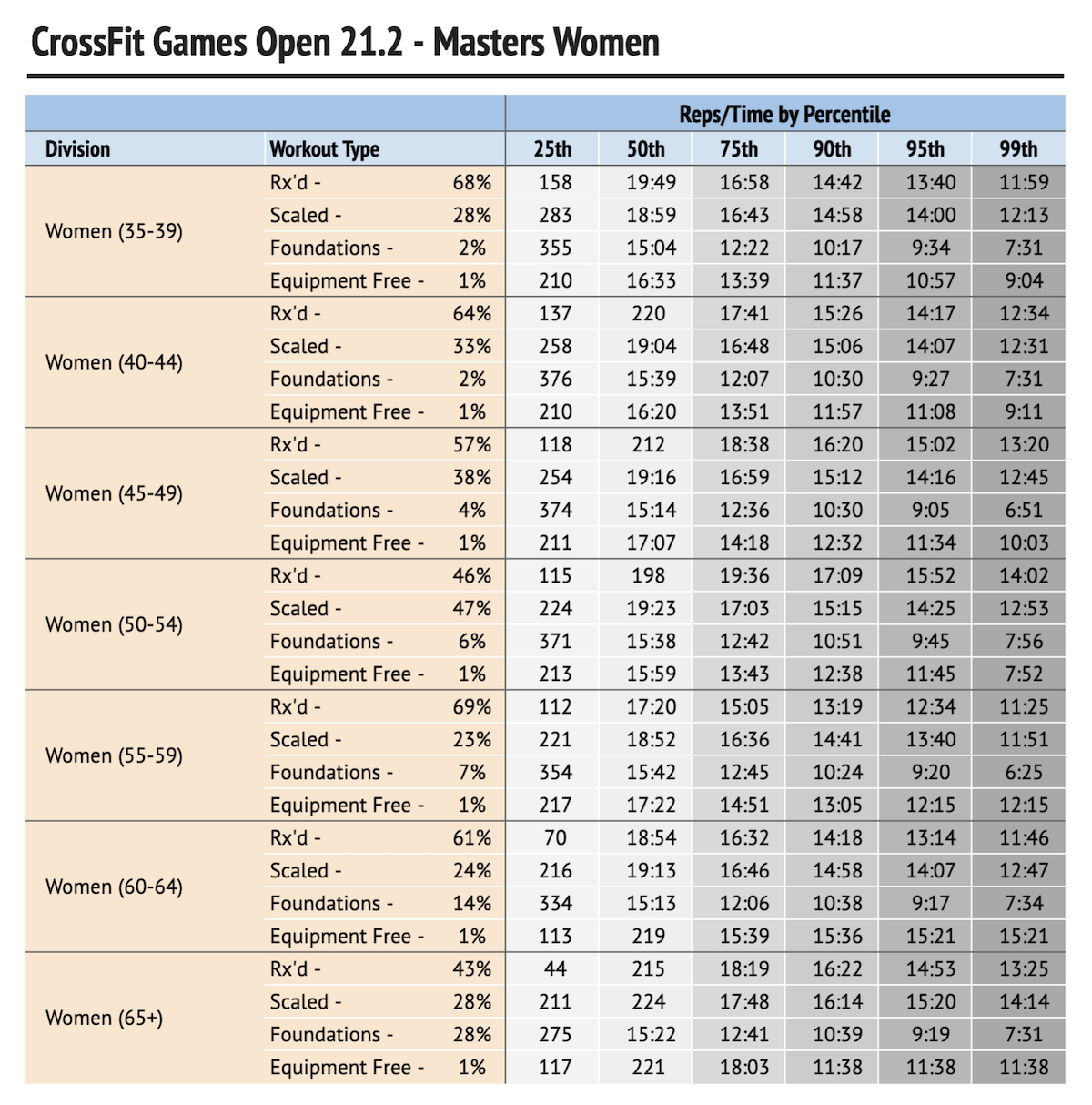 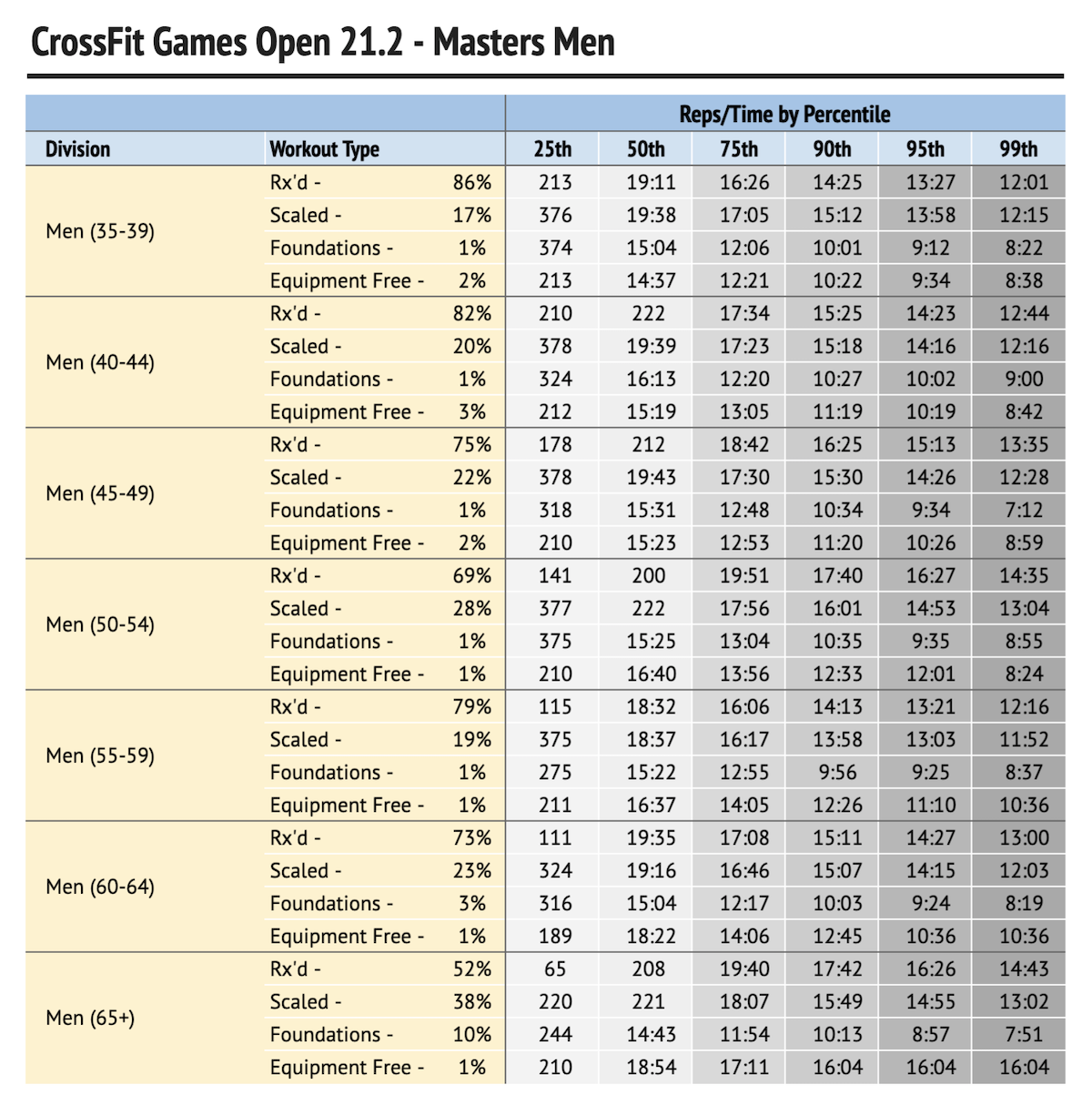 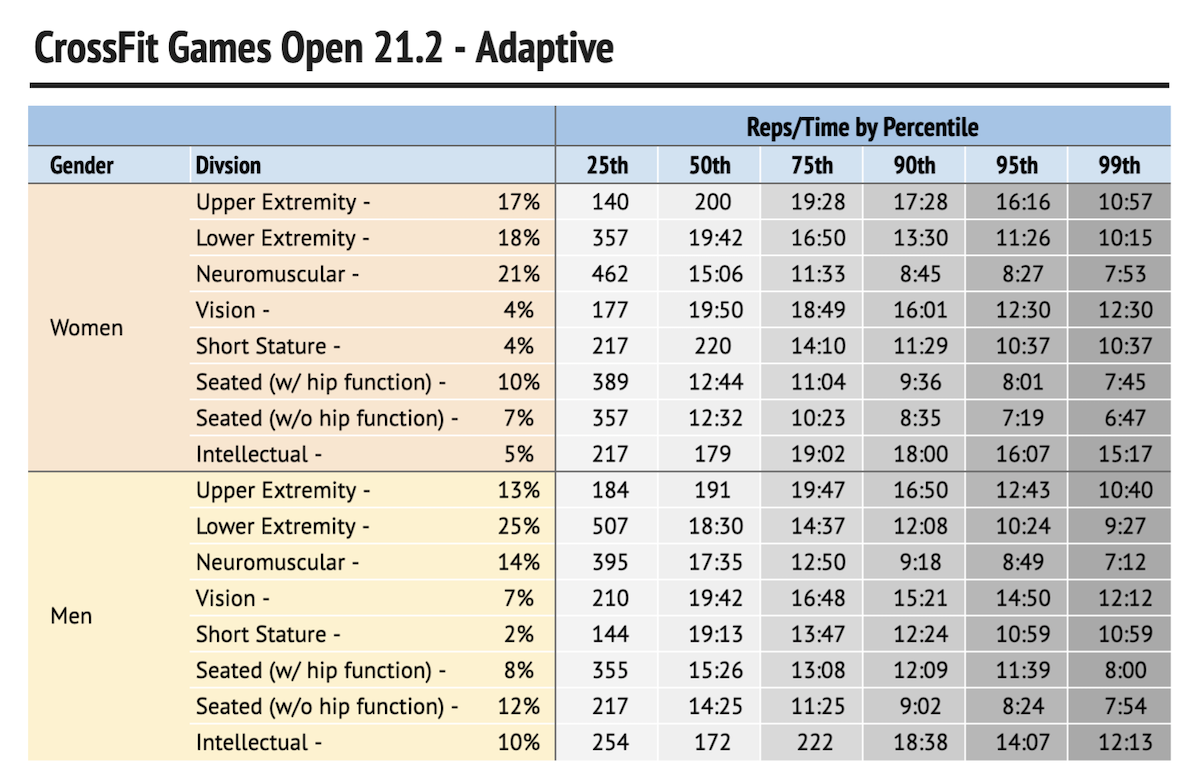