It’s been a long 15 months since 20.5, and we are happy to welcome back the CrossFit Games Open to its longtime Q1 home.

There were a lot of firsts this week for the Open. This was the first time we’ve seen wall walks in the competition. In an effort to make the Open more accessible and pandemic-friendly, we were introduced to foundations, equipment-free, and adaptive versions of the workout. There is also a new 65 and older masters division.

At first glance, 21.1 seemed so simple. You might have found yourself thinking, “Double-unders and wall walks — is this even a workout?” Like so many things, though, this workout was simple yet devastating. It was a shoulder- and core-destroying couplet, enforcing a 15-minute time cap on all but the fittest of the fit. Worldwide, less than 1% of all athletes finished the workout under the cap. The ascending rep scheme totaled 55 wall walks and 550 double-unders for those who made it.

In terms of equipment, this workout was very accessible. Only a jump rope and some wall space were needed to perform it as Rx’d. Wall walks turned out to be very challenging, especially for athletes who don’t regularly spend time inverted. If you’ve been paying attention, you will have noticed that CrossFit.com has been consistently prescribing inversions (The “I” in “SLIPS”) over the last few years. If you opted for the scaled wall walks hoping for an easier time, you were likely disappointed. As scaled athletes around the world quickly realized, scaled wall walks are no joke!
Double-unders have been a perennial staple of the Open since the beginning and have remained the nemesis of many athletes for just as long. If you still are having trouble with them, do yourself a favor and put in the extra practice you need to become proficient before the next Open. You will never escape them!

Below are the top 20 countries in the Open by participation. There has been some movement in the top 20 since 2020. This year Australia jumped ahead of the United Kingdom to claim its place as the second-largest country for Open participation. Despite a slight decrease, Canada was able to jump to third from fifth, over the U.K. and France. China made its debut in the top 20 this year, taking the 18th spot from Belgium. The United States saw a 5% increase in participation, bringing its total share just above 50% for 2021. 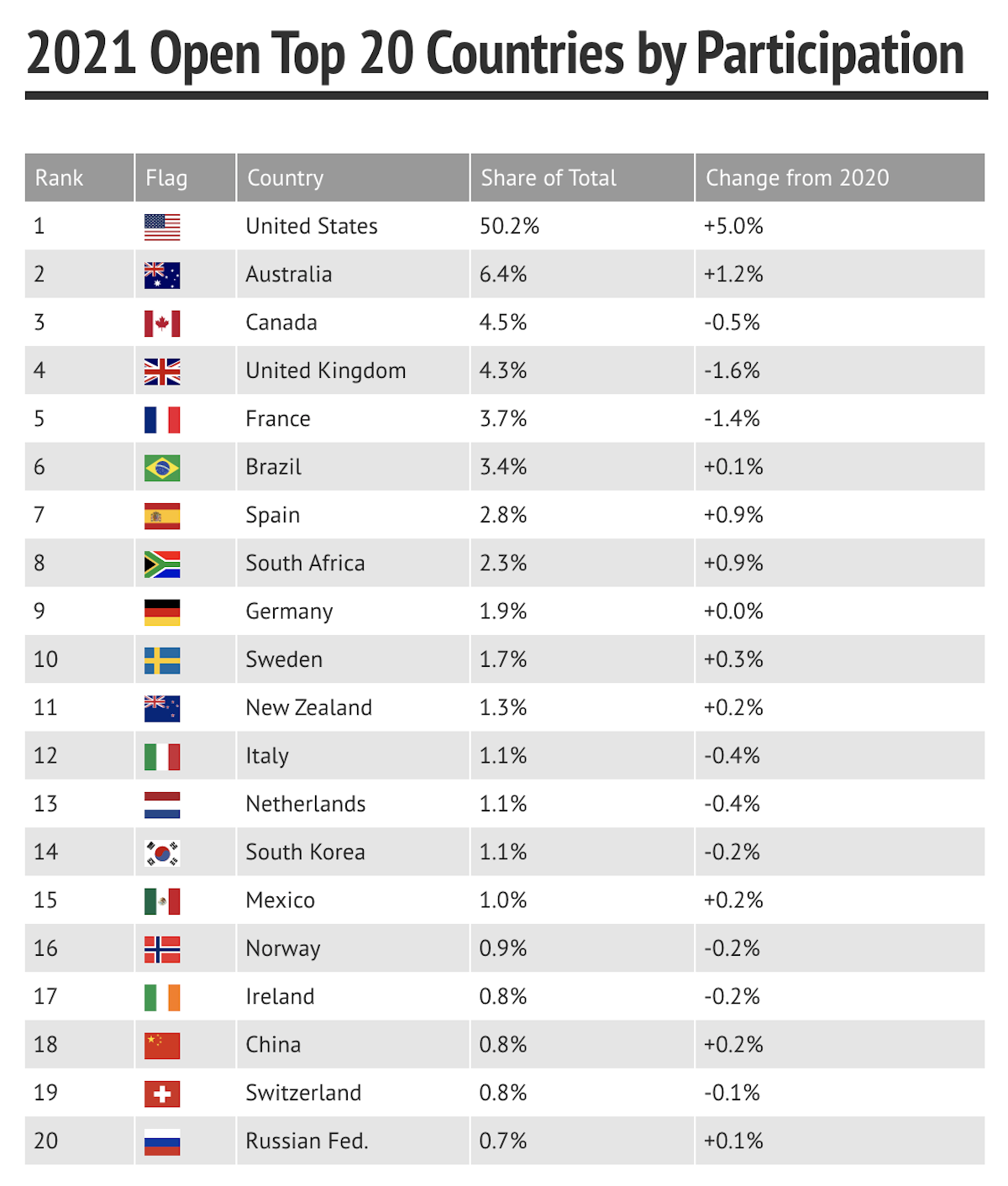 Looking at what share of a country’s athletes performed the workout as Rx’d is a good way to compare relative competitiveness among countries of different sizes and participation rates. Of the top 20 countries, South Korea had the highest Rx’d share at 87%, followed by Mexico, the Russian Federation, Sweden, and Norway (all with 80+% Rx’d). Since all ages performed the same Rx’d version of 21.1, we included numbers from all ages groups in the chart below.

Pandemic-related issues have made preparing for this year’s Open a challenge, and we can see below that lockdowns and restrictions may still be affecting participation in some countries, notably the U.K., Germany, and Ireland. This was in spite of the relatively low equipment requirement for this workout. 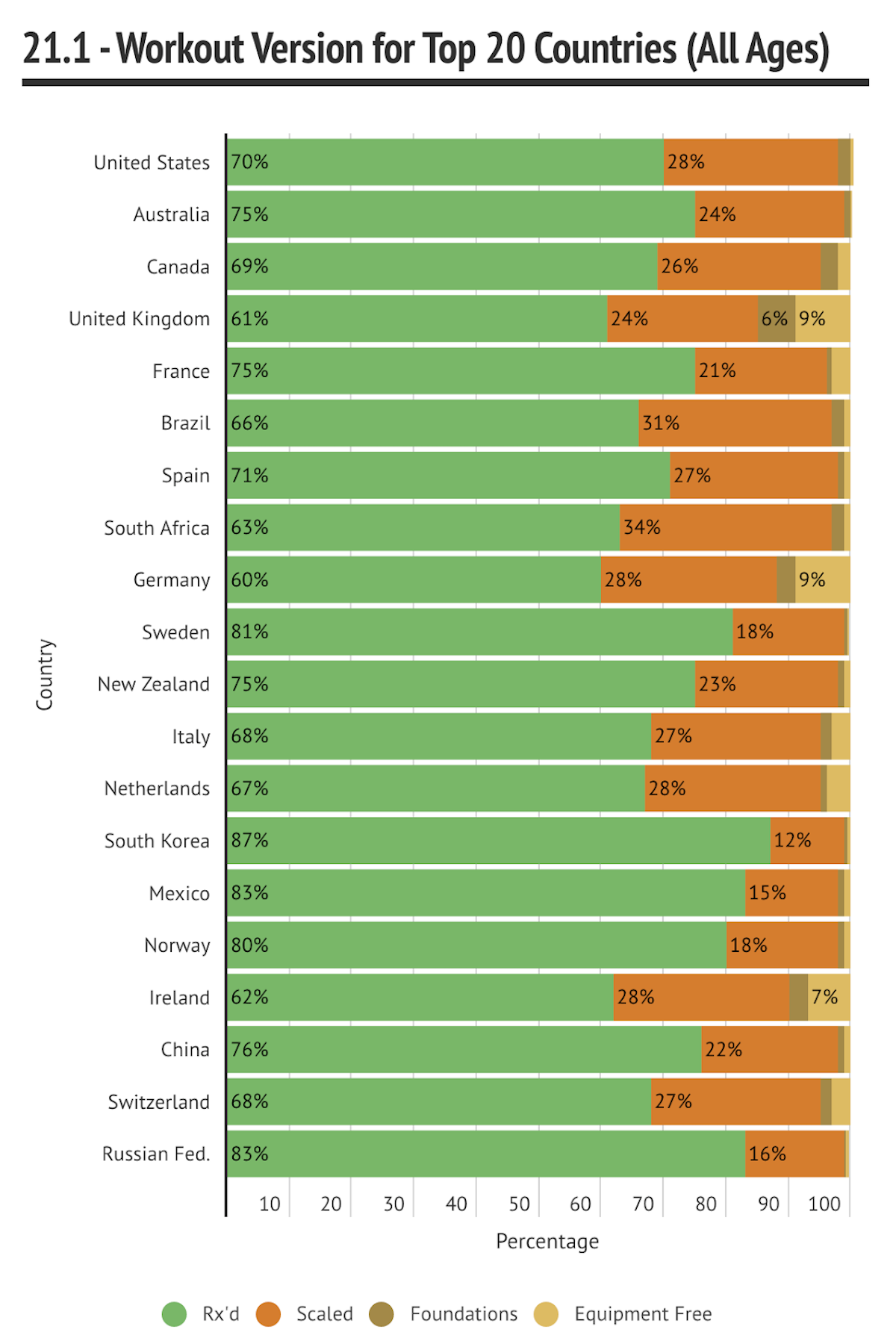 Of the eight new adaptive divisions, each with workouts tailored to its athletes’ abilities, 39% were able to finish their workout under the 15-minute time cap. 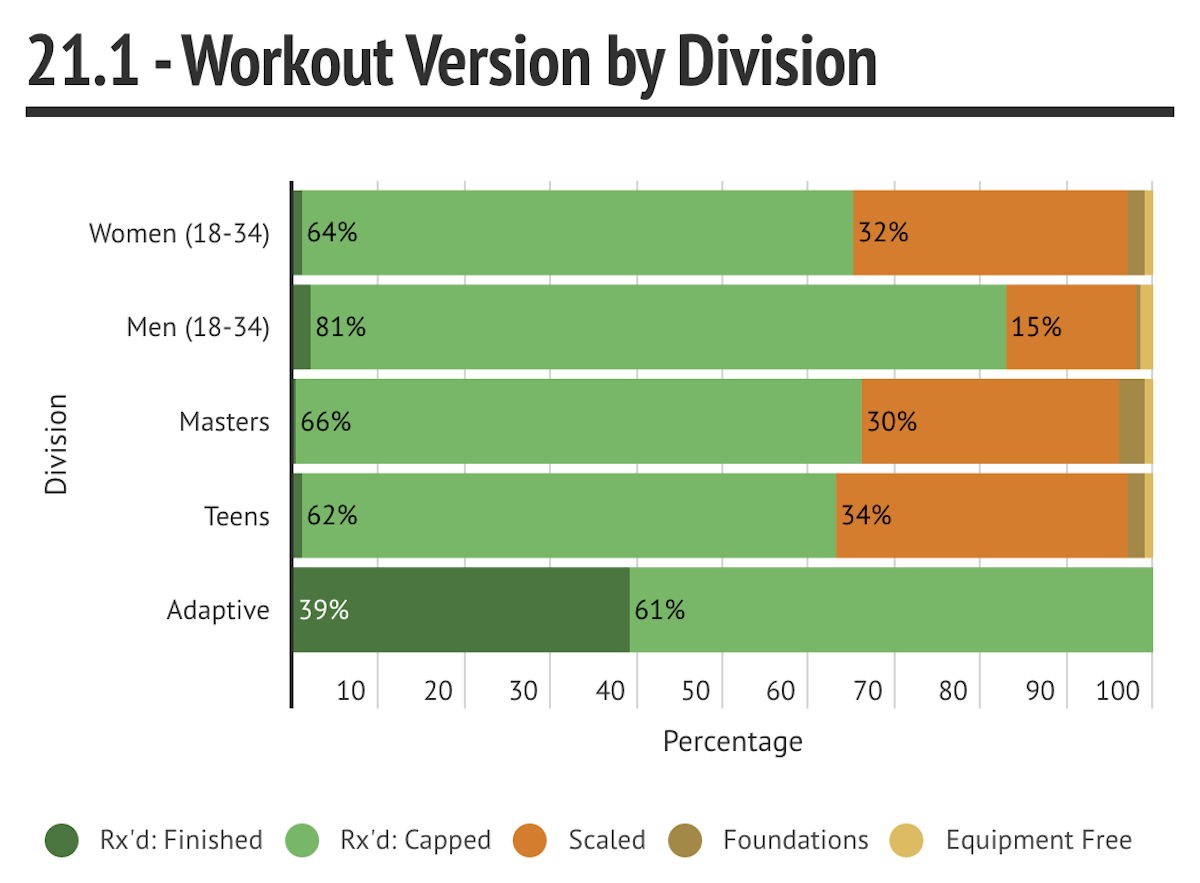 Unlike many Open workouts, there was no clear roadblock on this workout. Most athletes moved as quickly as they could through the double-unders and chipped away at the wall walks. In the rounds of 15 and 21 wall walks, every rep represented a significant change in placement.

The vast majority of athletes finished somewhere between the start of the 15 wall walks and the finish of the 21 wall walks. 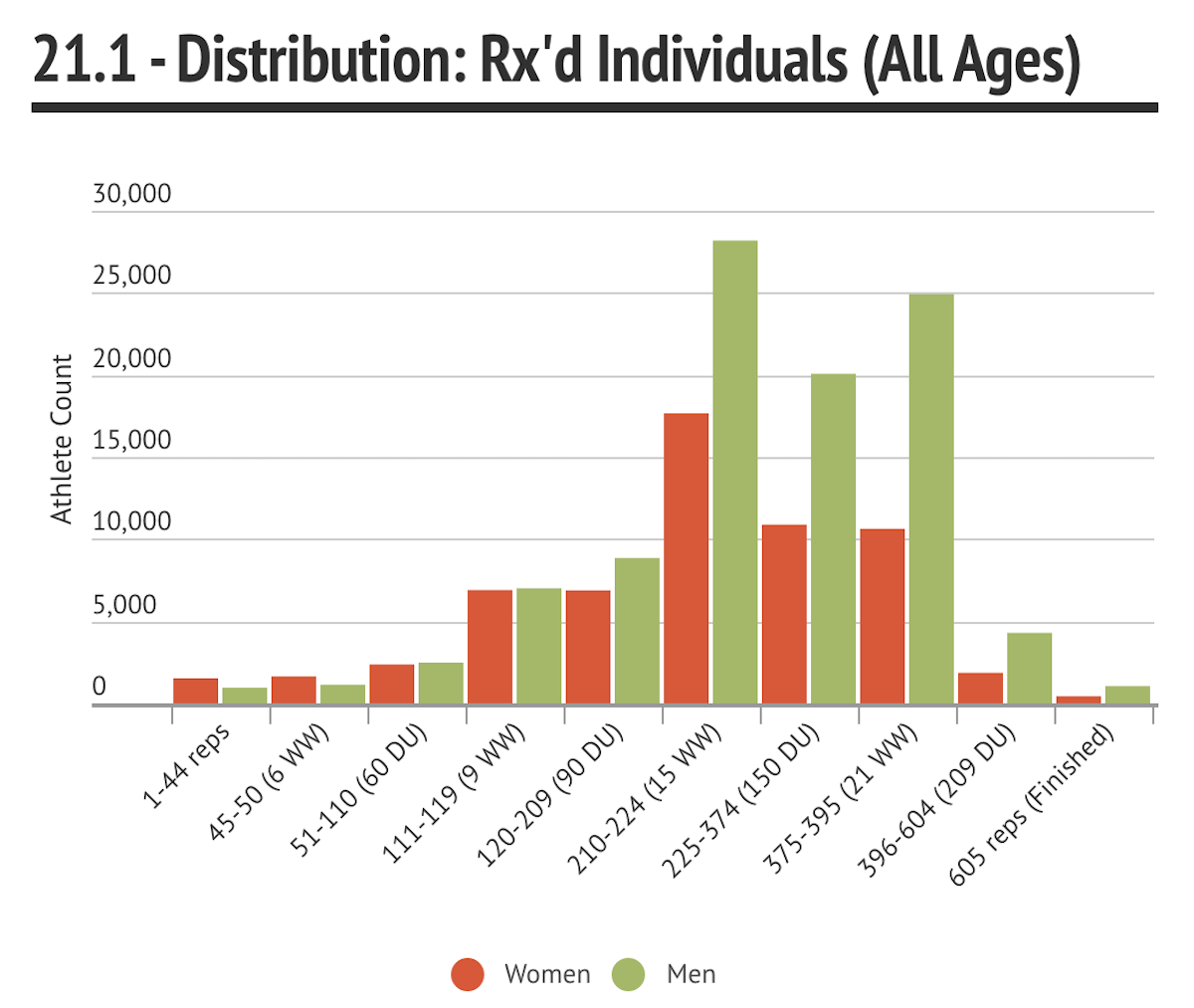 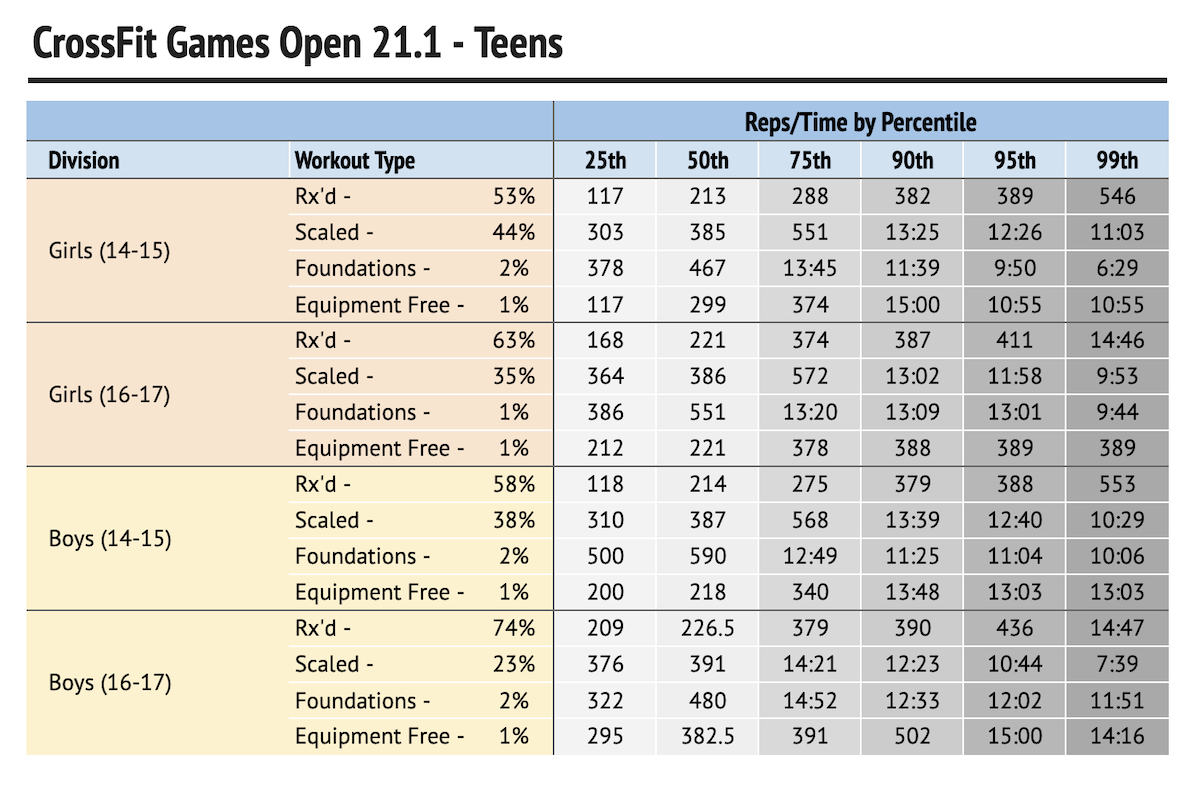 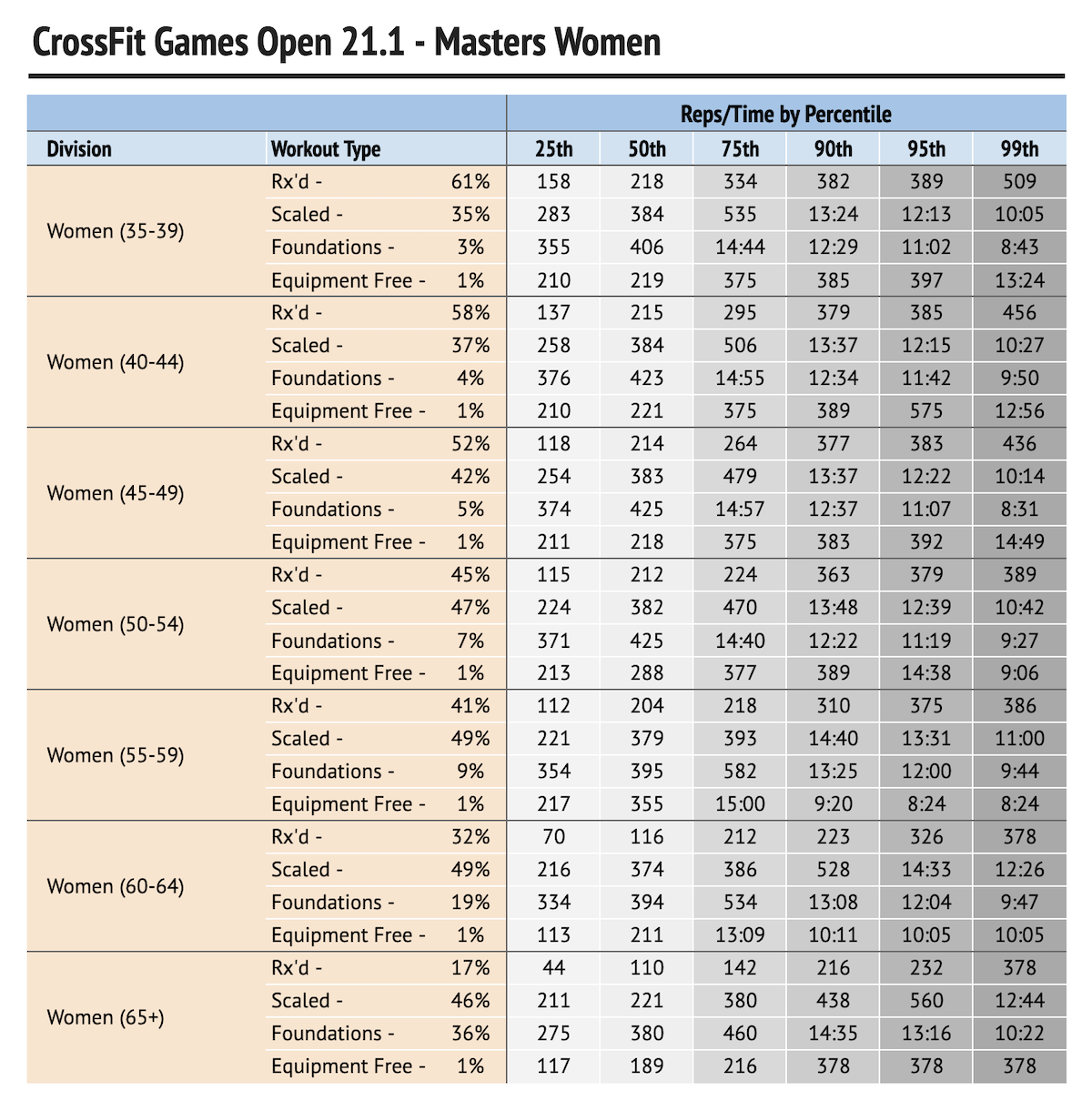 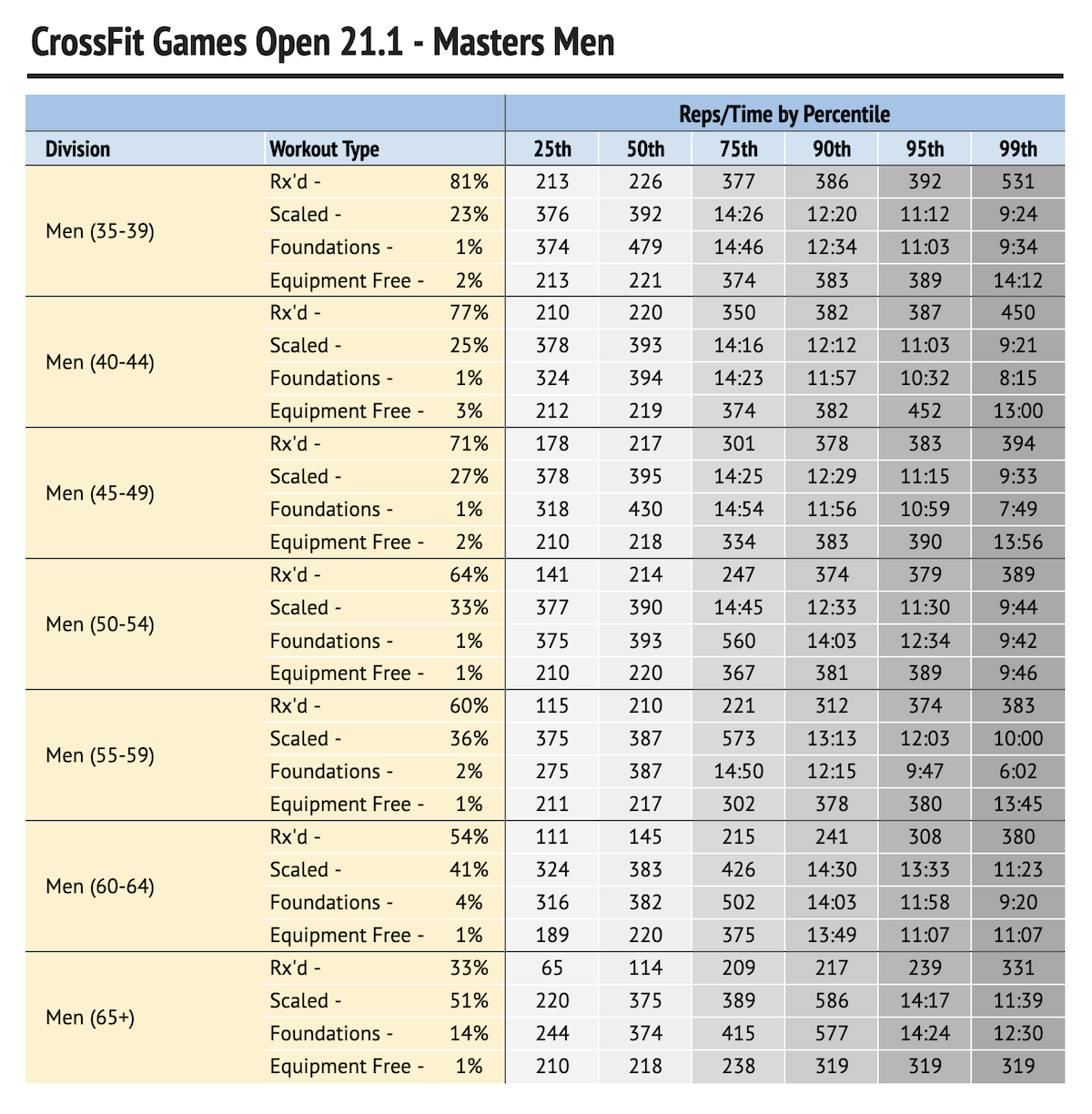 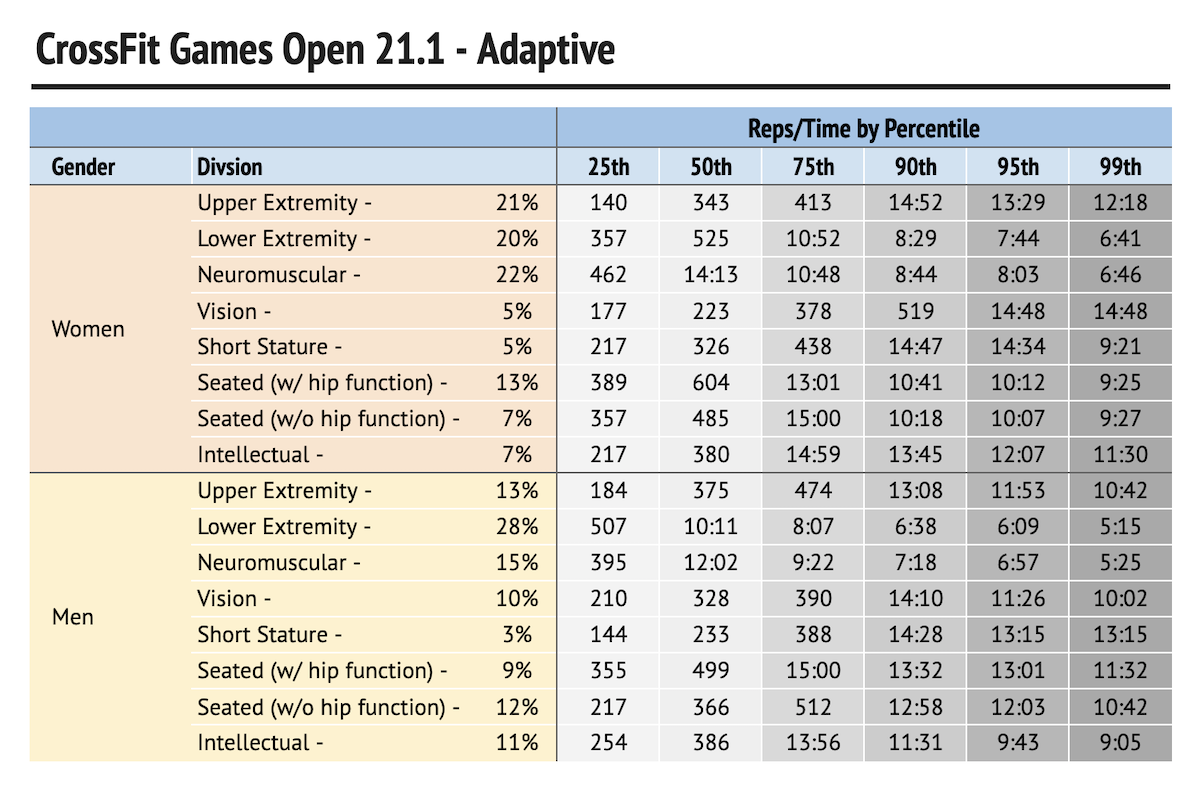