The final day of CrossFit Games competition got underway around 9 a.m. CT after a brief weather delay. By the end of the day, the fittest men, women, teens and team on Earth were being fitted for their crowns.

Reigning women’s champ Tia-Clair Toomey started Sunday with a 114-point lead over rookie Laura Horvath in second. The 2017 second-fittest woman, Kara Saunders, sat in third place at the start of the day.

On the men’s side, Mat Fraser began by doing Mat Fraser things, maintaining a 138-point lead over Patrick Vellner in second. Lukas Högberg sought to maintain his stellar performance from the first few days of competition and sat in third place with only a few events remaining.

“For me,” Högberg explained, “it was keep the same pace the whole time and try to push at the end.”

Two-time Fittest woman on Earth Katrin Davidsdottir led Women’s Heat 2 until the end of Round 4 when Horvath took over after the fourth sled pull. Horvath, a rookie, picked up the pace on the final run and finished her calories on the Assault bike just a split second behind Davidsdottir. But Horvath’s sled pull was much faster than Davidsdottir’s, and she took the event win in 15:12.38.

“I just really like running, I guess,” Horvath said casually after the event.

Her plan for the rest of the day: “Just keep having fun and doing the best that I can.”

In the afternoon, CrossFit Games Director Dave Castro announced the final two events for the individual athletes, the first of which was Handstand Walk (IE13). Athletes had to complete heavy double-unders before maneuvering through a handstand-walk obstacle course that included a slalom, incline ramp, stairs and parallette bars.

Cody Anderson set the time to beat in an early heat with an impressive run, crossing the finish line at 1:29.42. The time held up, and Anderson took the event win. 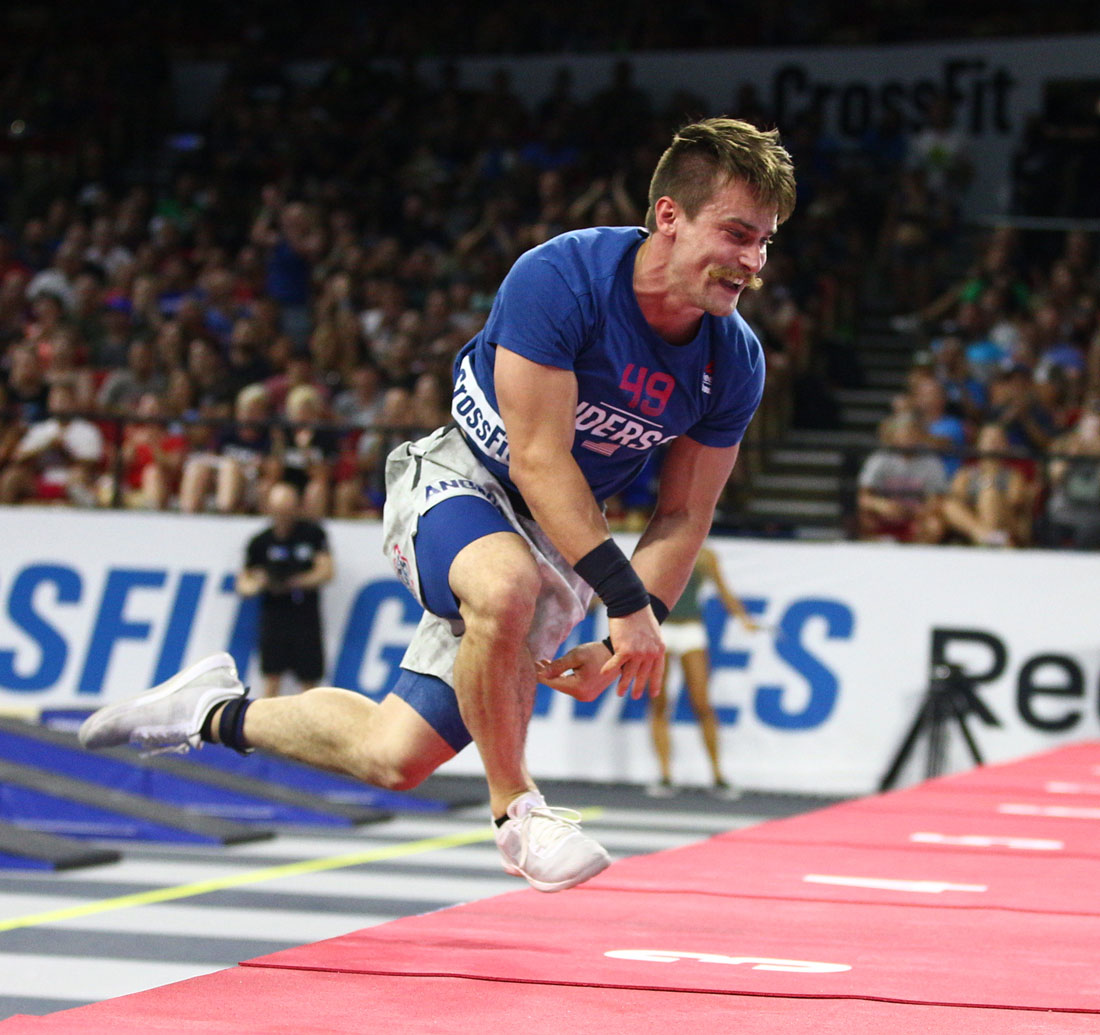 After being sent back to the starting line due to a false start, Fraser went on to handle the handstand-walk obstacles with little difficulty, winning his heat and securing him enough points to make his second straight Games win a near-certainty.

Next, the women took the floor.

Courtney Haley relied on her experience as a gymnast to help her earn a heat win and second-place finish overall. She put up the first sub-2:00 time for the women at 1:59.03.

In the final heat, Brooke Wells executed a consistent and methodical run through the course. She handstand-walked her way to a heat win and captured the event win with a time of 1:57.78. 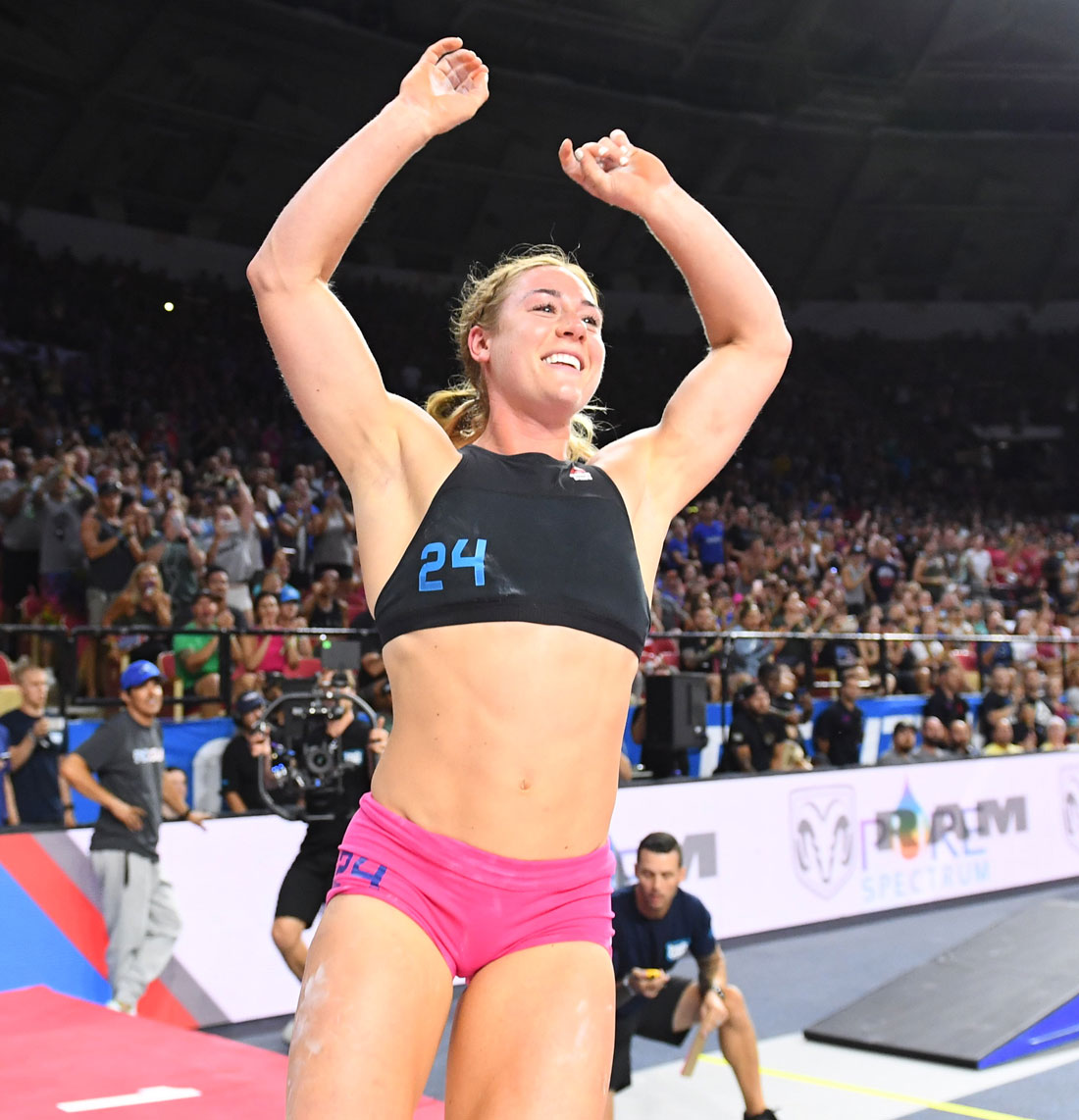 Davidsdottir finished second in the final heat, fifth overall, with a time of 2:05.52.

The event narrowed Toomey's overall lead over the rest of the field. Fans watched as Toomey appeared to struggle more than her fellow competitors, finishing 10th in the event overall.

Saunders took 13th in the event and now sits in fourth place overall as we head into the final event of the weekend.

The final event of the day was named for the eponymous hero of Virgil’s Aeneid. Aeneas is a demigod who carries his father, Anchises, to safety on his back while Troy burns behind them.

In this event, the CrossFit Games' mere mortals had to draw on their superhuman strength to carry a heavy yoke following pegboard ascents—5 for the men and four for the women—and 40 reps of thrusters.

Fan favorite Josh Bridges may not have won the heat, but he definitely stole the show in Heat 1, conquering the men’s final 665-lb. yolk carry and crossing the line to the uproarious cheers of the crowd.

Heat 1 of the women took the floor in front of a packed house, and rookie Paige Semenza set the time to beat: 5:32.26.

Margaux Alvarez recovered from her pegboard fall with a smile—she finished 25th overall.

“She just demolished that yoke,” Games announcer Tanya Wagner shouted as Schuerch snagged the new time to beat in Heat 3 (4:33.72).

It was time for the top 10 women took the floor for the final heat. Horvath, Toomey and Davidsdottir were neck and neck as they started the yoke carry. In the end, Horvath sprinted across the line for the heat and event win at 3:49.36. Davidsdottir finished in third, just after second-place Toomey.

In the final heat for the men, no one could stand between Fraser and a repeat title. He powered through the event, took first place—his ninth career event win—and became the Fittest Man on Earth for a third straight year.

Toomey took the overall win on the women’s side, becoming the Fittest Woman on Earth for a second year in a row.

No one in the audience was frantically tallying points to figure out who would top the podium this year. Toomey and Fraser performed well enough all weekend long to leave their fellow competitors in their chalk dust.

The fight for silver and bronze brought slightly more drama, and in the end, when the dust settled, the women's podium filled out with Horvath in second and Davidsdottir in third.

Vellner, who began the weekend in 35th, rebounded to second among the men. It was unclear whether third would go to Fikowski or one of the competition's dark horses, Högberg.

The final decision came down to a tie break. Because of his first-place finish on Two-Stroke Pull, Högberg took the final spot on the podium.

Check out the full Leaderboard for final standings in all divisions.

Visit the Leaderboard for a complete list of the overall standings for TEAMS, MASTERS and TEENAGERS.