The CrossFit Total first made an appearance in competition at the inaugural CrossFit Games in 2007, which took place at The Ranch in Aromas, California. This year, we'll see what 11 years of evolution can do for the numbers as we watch competitors at the 2018 Games take on the exact same event in Madison, Wisconsin.

The CrossFit Total adds up the max weights successfully lifted for the deadlift, back squat and shoulder press. In 2007, the highest total for the men was put up by Connor Banks with 1,225 lb. The women's winner was Nicole Dehart, who lifted 530 lb. across the three lifts. See the complete leaderboards and additional photos below. 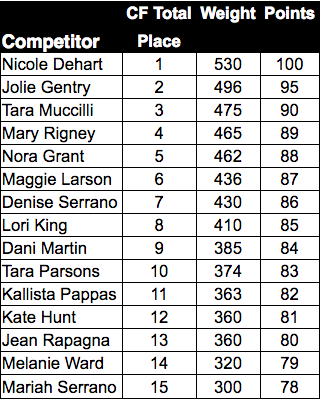 The CrossFit Total is Individual Event 3 (IE3) of the 2018 Games—and it has a twist. Athletes will have just a 4-minute window to perform each lift. Within that window the athlete may make up to 3 attempts. The athlete’s score will be the combined total of his or her heaviest successful lift at each station.

Find out how to watch here.