Week 4 of the Reebok CrossFit Games Open brought us Diane, followed by heavier deadlifts and handstand walks, all within a 9-minute time cap. Several hundred athletes completed 18.4 as Rx’d within the time cap (compared to two athletes in 18.3), but this still represents less than 1 percent of the field.

Although you may have done Diane several times in the past, this was not the girl we all know and love. There was a new standard this year for handstand push-ups, and many athletes struggled to meet it. It necessitated narrower hands, straighter bodies, and in some cases, sheer power of will. Many athletes with a sub-9-minute Diane were unable to complete 90 reps in 18.4. Some much faster athletes still completed Diane but added minutes to their normal time.

Among competitors aged 18-34, 82 percent of men and 59 percent of women attempted the Rx’d version of 18.3, compared to 77 percent and 57 percent last week, respectively. 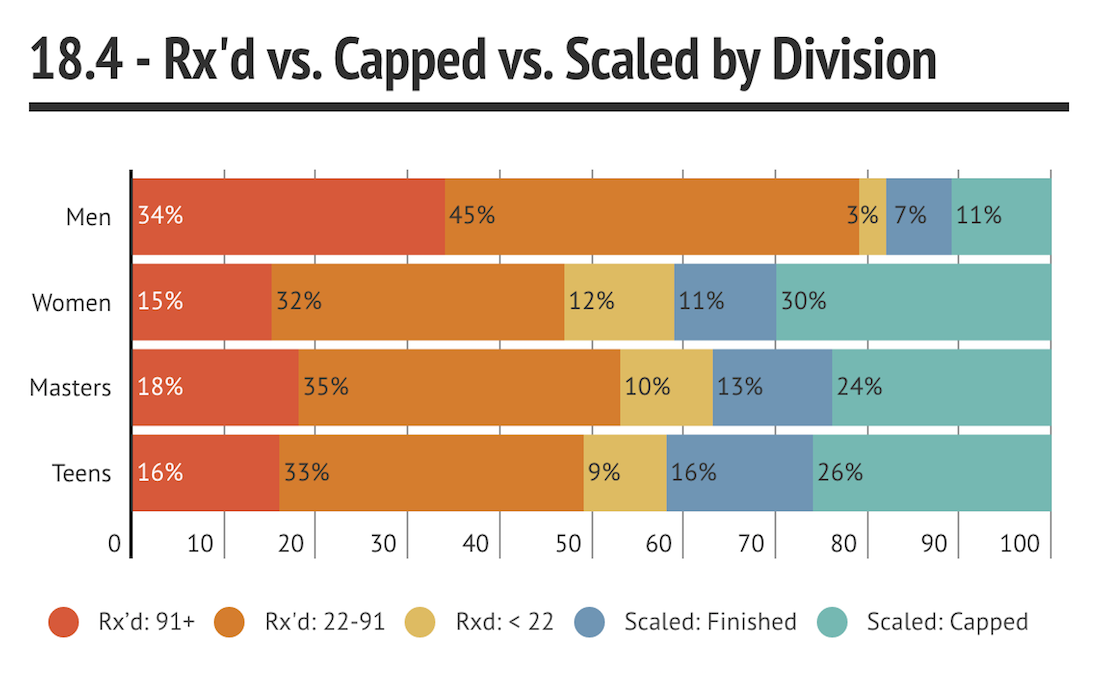 Very few Rx’d athletes got stuck on the lighter deadlifts. Looking at the distributions, we see that most athletes had little problem with them. The majority of athletes found themselves time-capped on one of the sets of handstand push-ups. Looking at individual movement sets, the largest grouping for the men was on the 21 heavier deadlifts. For the women, the largest grouping was on the 21 handstand push-ups. There was also a large group of women who were time-capped on the 21 deadlifts. Only the best athletes got past the 15 heavier deadlifts. 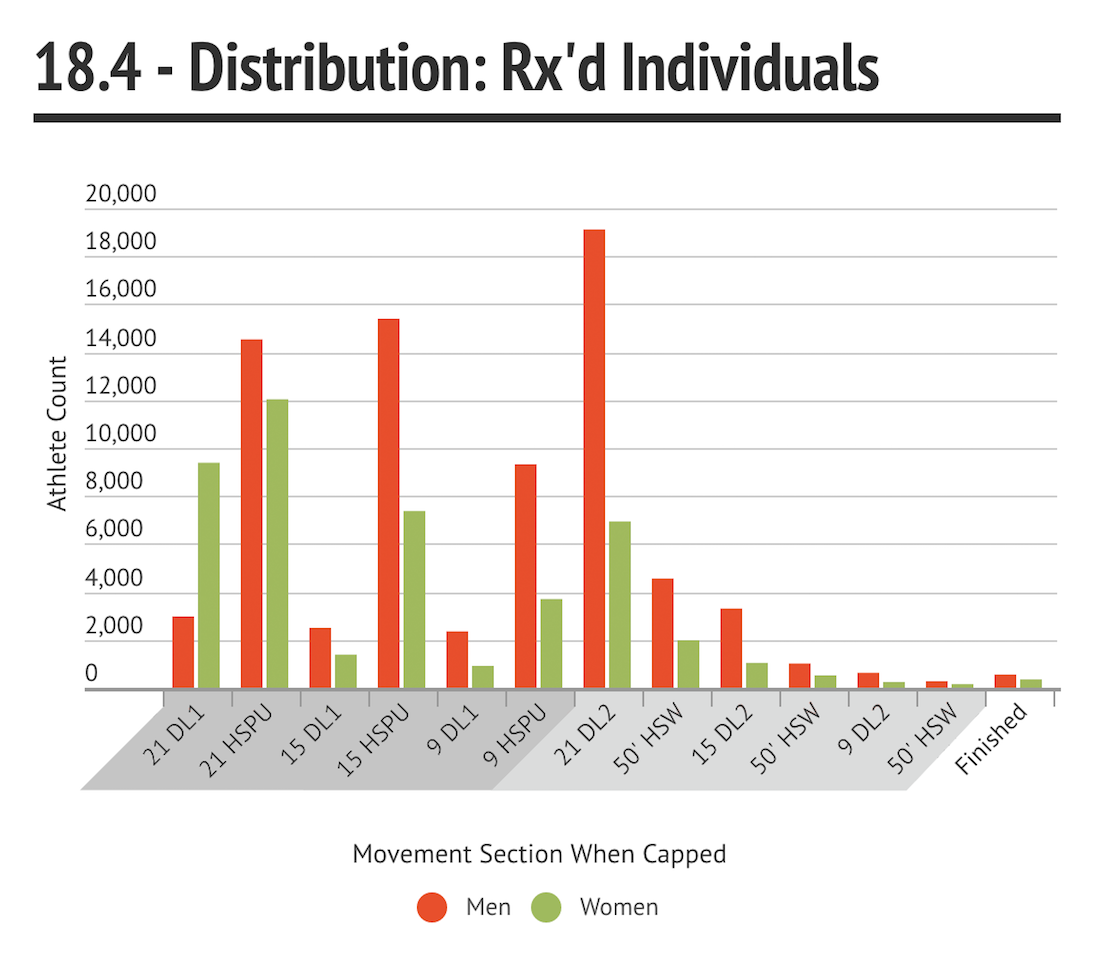 Below are the percentile tables for all divisions on 18.4. You can see the breakdown of what time and/or reps you had to get to achieve a particular percentile for your division. The table contains reps for athletes who didn’t finish within the time cap and times for those who did. Many of the athletes who performed the Scaled version of the workout were able to finish it. For example, for Scaled Women (18-34), a finish time of 8:55 would put you in the 75th percentile. 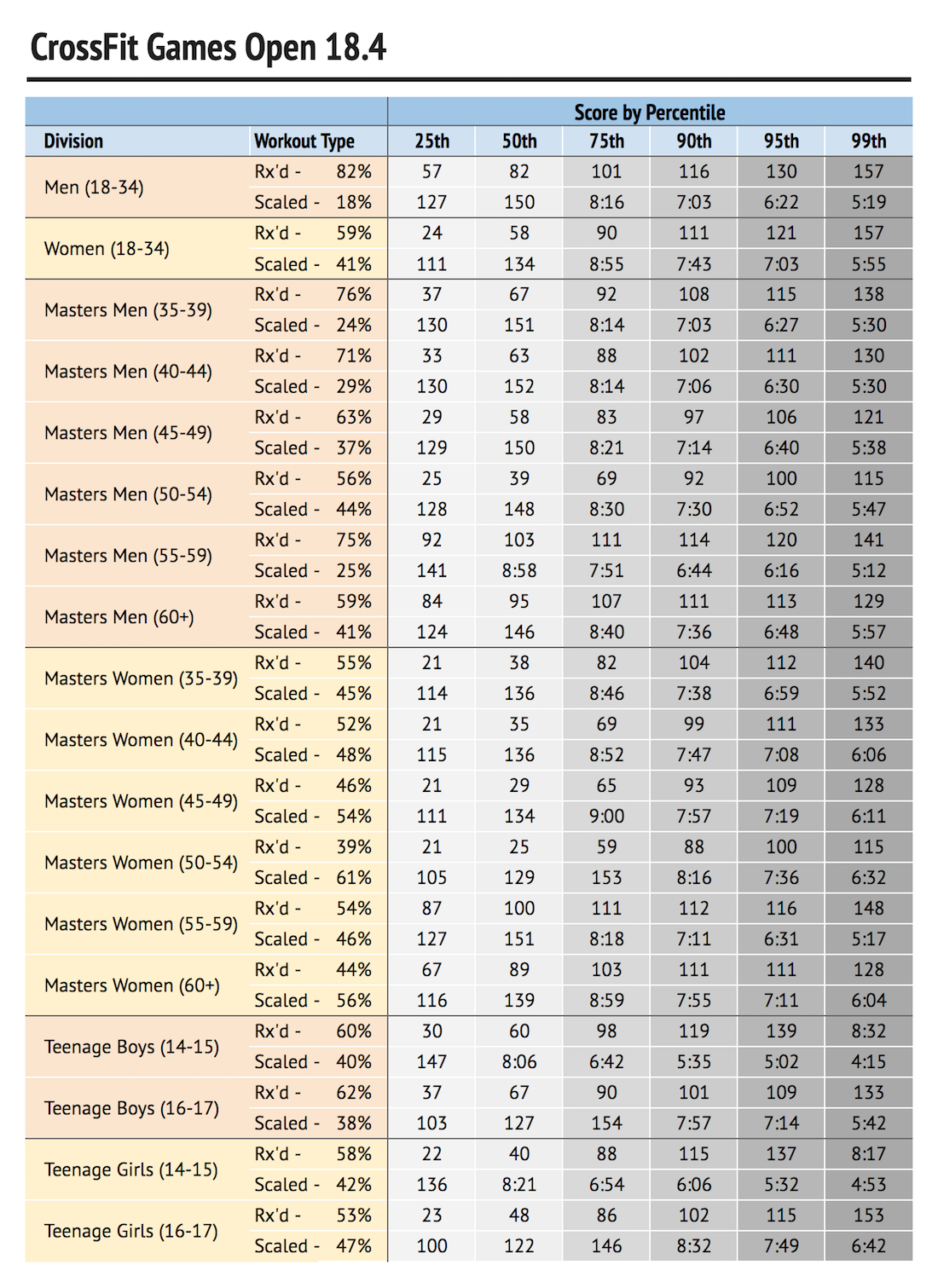