Week 3 of the Reebok CrossFit Games Open brought us double-unders, overhead squats, dumbbell snatches, and ring and bar muscle-ups. Technically, the workout was 2 rounds for time, but with an aggressive 14-minute time cap, it turned into an AMRAP-style workout for all but two competitors—Dakota Rager and Josh Bridges.

Although we’ve seen some type of muscle-up every year in the Open, this was the first time we’ve seen both types of muscle-ups in the same workout. And to the disappointment of many proud bar muscle-up aficionados, you had to get past the 12 ring muscle-ups (and 440 other reps) to get to the pull-up bar. It was more accessible than 15.3, though, which opened with 7 ring muscle-ups.

Among competitors aged 18-34, 77 percent of men and 57 percent of women attempted the Rx’d version of 18.3, compared to 89 percent and 71 percent last week, respectively. 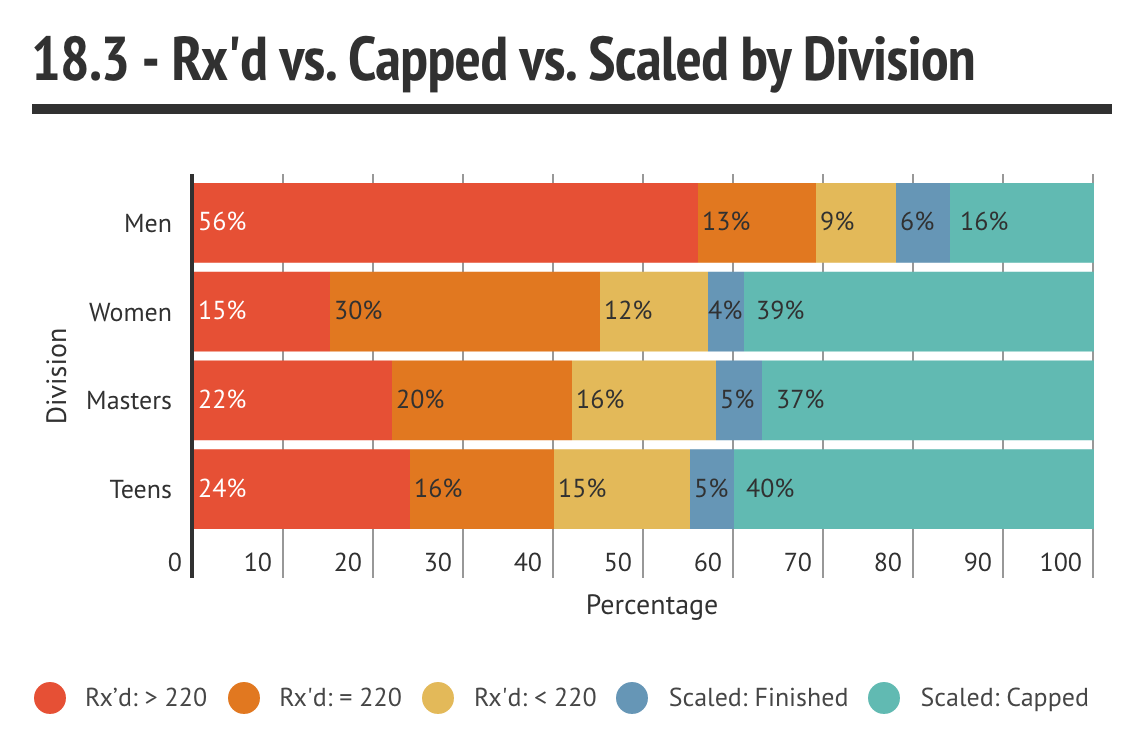 Finishing this workout was nearly impossible. Just getting past the first round is pretty impressive. Only 25 percent of Rx’d men and 6 percent of Rx’d women made it into Round 2.

The chart below gives the distribution of Rx’d scores based on the movement the athlete was on when the time cap hit. You had to get at least one rep in the next movement section to be included in that grouping. The giant spike during the second set of double-unders includes all the athletes who were either still working on their double-unders or finished them but didn’t get a ring muscle-up.

For the women, we see that the big roadblock was the ring muscle-ups. For the men, we see a big group that got some ring muscle-ups but not all of them. There also is a nice distribution of scores for the men centered on the bar muscle-ups at the end of Round 1. These were athletes who could perform all the required movements, and the differences in their scores came down to movement proficiency and work capacity. 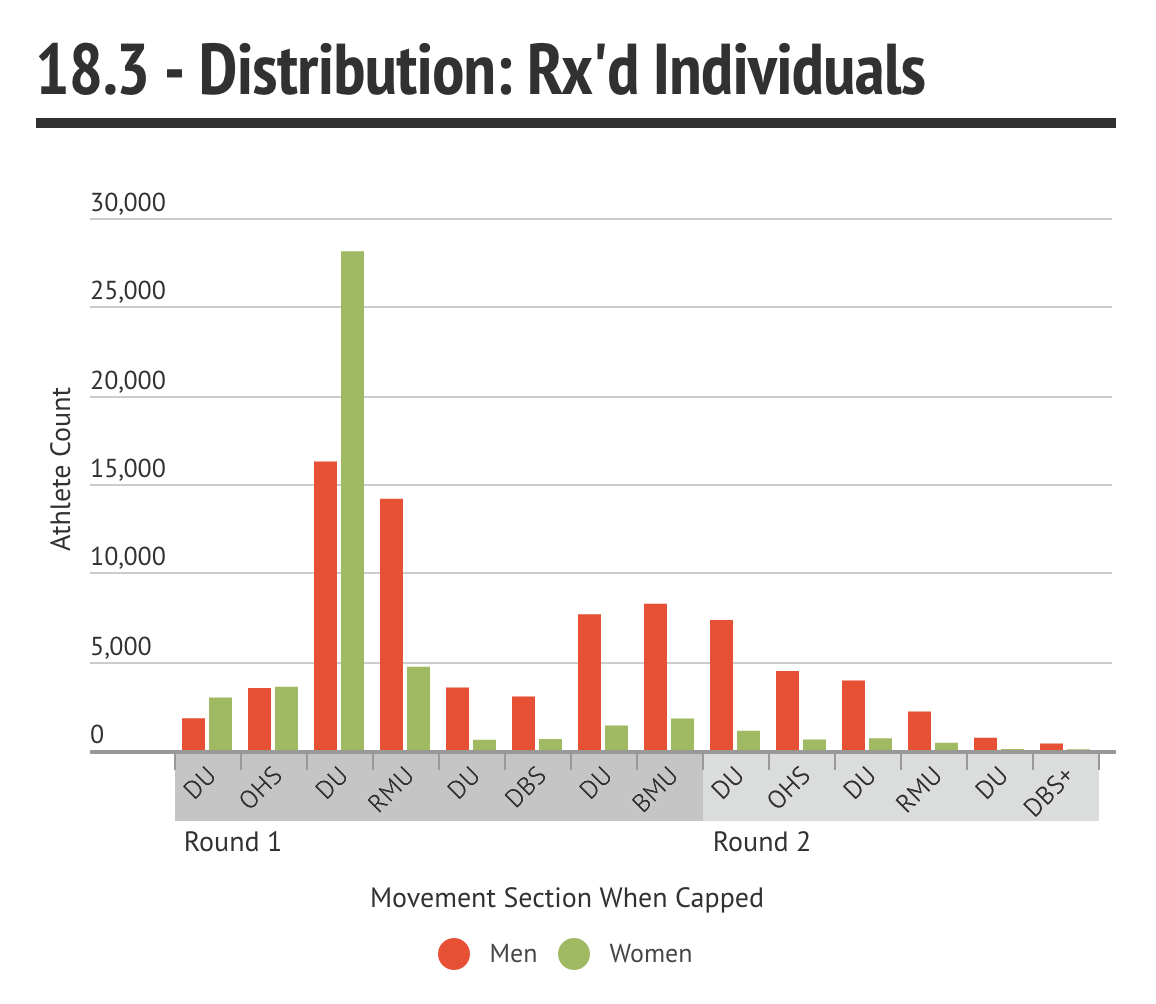 Below are the percentile tables for all divisions on 18.3. You can see the breakdown of what time and/or reps it took to achieve a particular percentile for your division. Times in gray are the finish times for the workout, and times in green are the tiebreak times for athletes with 220 reps. For example, for Rx’d Women (18-34), you needed 220 reps with a tiebreak time of 6:27 to get into the 50th percentile. 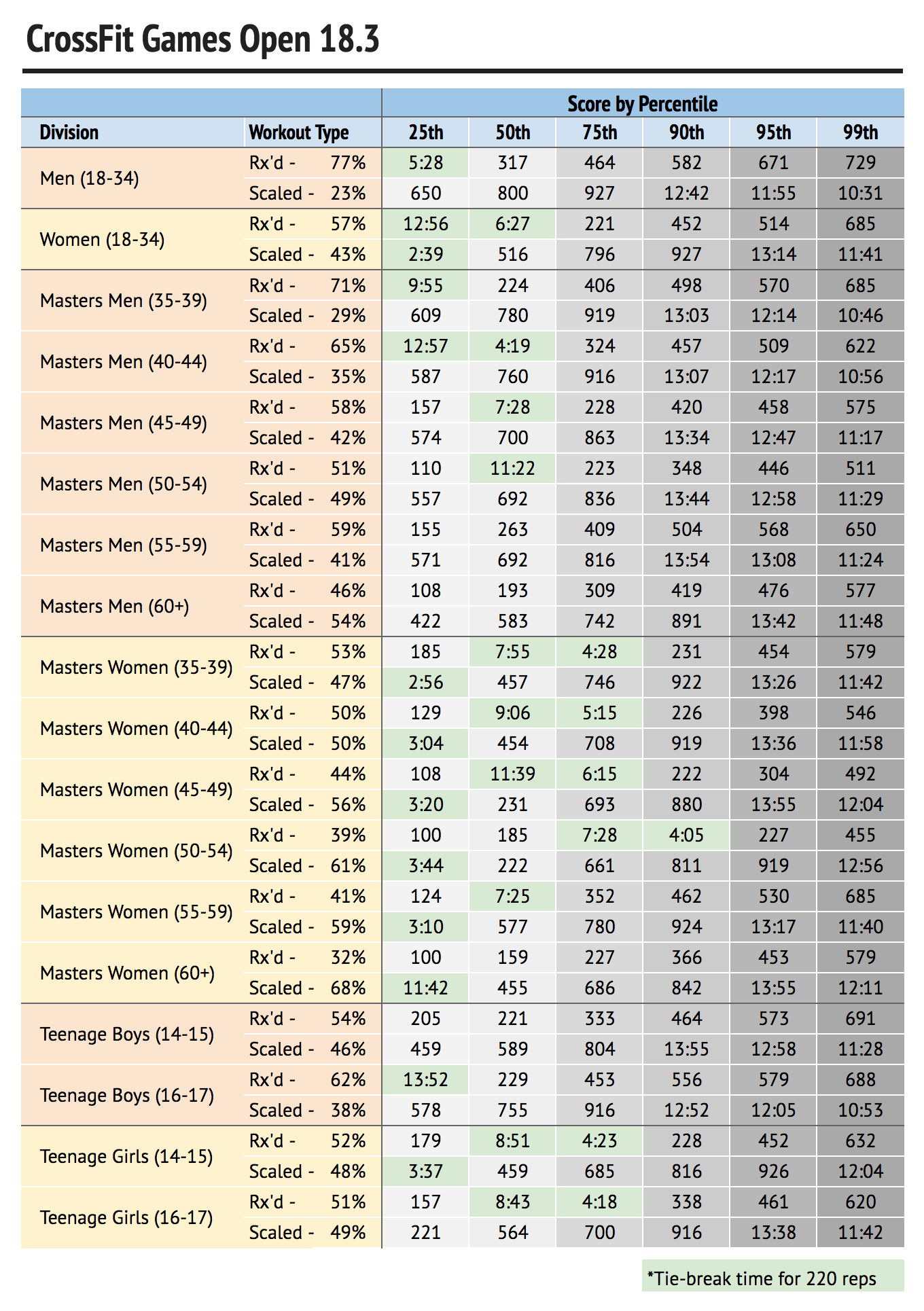