Week 2 of the Reebok CrossFit Games Open features two workouts: 18.2 and 18.2a. Workout 18.2 is a couplet of dumbbell squats and bar-facing burpees. Workout 18.2a is a 1-rep-max clean. There is a 12-minute time cap to complete both the couplet and the clean.

The last time we saw two scores in one week was in 2015, during 15.1 and 15.1a. Back then, the format was a little different. You had a 9-minute AMRAP, followed by 6 minutes in which to perform a 1-rep-max clean and jerk. That format drew some controversy, as some extremely strong competitors chose to sandbag the workout and perform a completely fresh max lift.

In order to mitigate that issue and elicit the desired effect of these combined workouts for 18.2 and 18.2a, we now see both the workout and lift included within a fairly challenging time cap. This was an ingenious way to force athletes to “pay to play.” You need a pretty substantial base level of fitness to even complete 18.2 as Rx’d, and the more time you take on the workout, the less time you have to lift.

Heavy-ish dumbbell squats combined with bar-facing burpees that required two-footed jumps turned out to be pretty accessible to the majority of athletes. Among all competitors, 89 percent of men and 71 of women attempted the Rx’d version of 18.2, compared to 85 percent and 60 percent last week, respectively.

However, looking at who finished 18.2 tells us a slightly different story. Only 82 percent of individual men and 62 percent of individual women completed the workout before the time cap. It appears that some strategically minded athletes decided to perform 18.2/2a as Rx’d, even though they hit the time cap on 18.2 and didn’t get an opportunity to lift. The way these workouts are scored puts a time-capped Rx’d athlete (with no lift) ahead of every scaled athlete on both 18.2 and 18.2a. This made doing 18.2/2a as Rx’d a smart move for the Leaderboard. 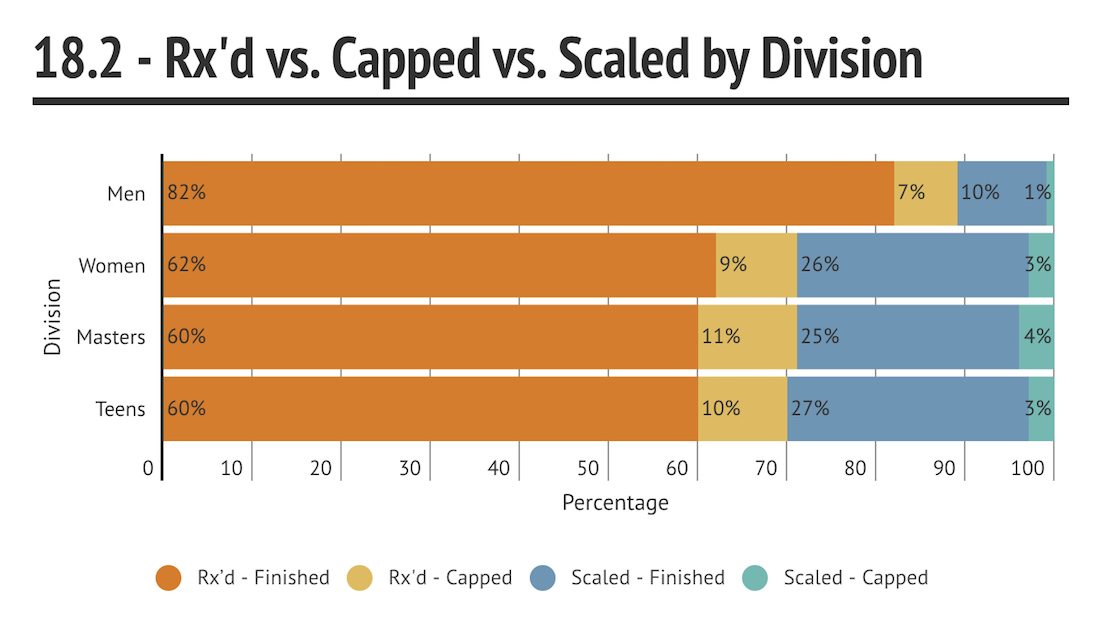 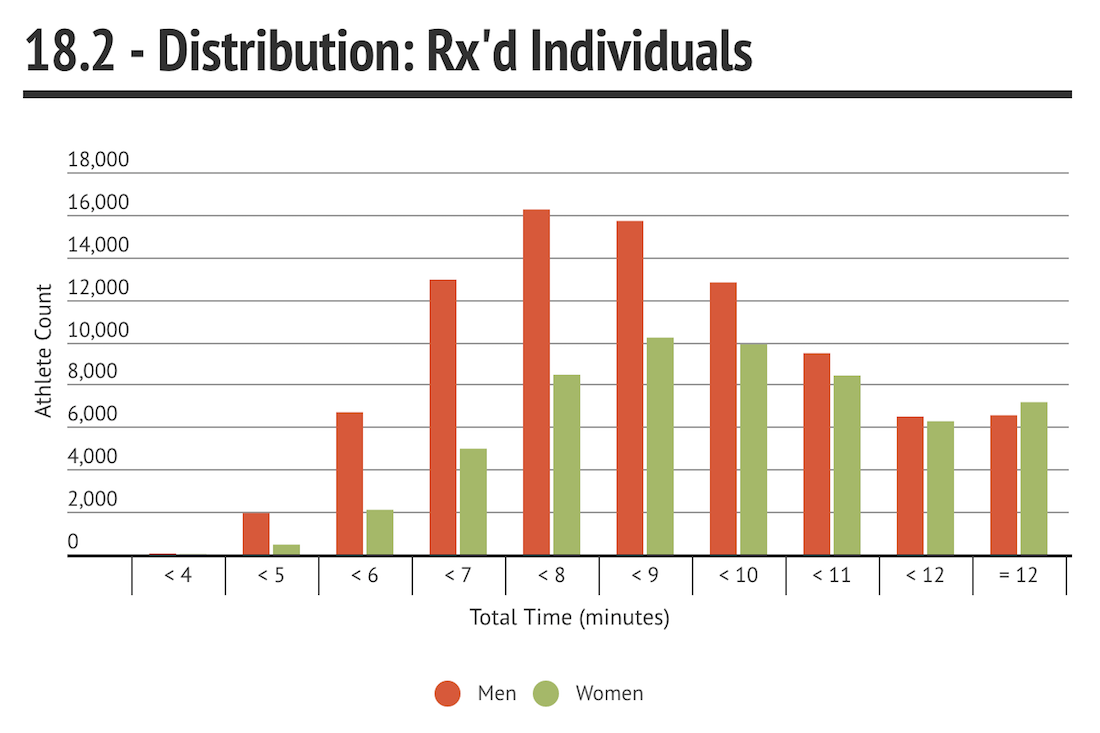 For the cleans, the average for Rx’d individual men was 205 lb., compared to 121 lb. for the Rx’d individual women. As a percentage, the women lifted 59 percent as heavy as the men (on average). This is a little lower than the 65-70 percent we normally see used in adjusting workout weights for genders. 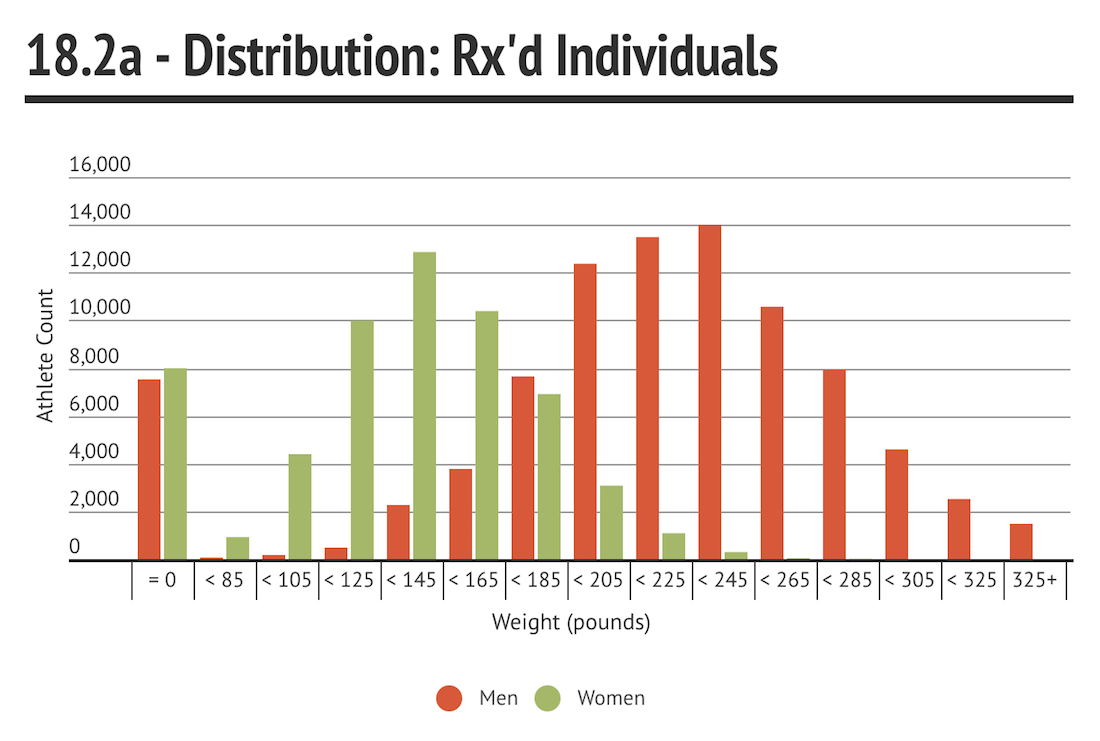 The Fitter are Stronger

Even with the new format, it was still possible that we’d see a lot of stronger athletes put up slower 18.2 times before proceeding to lift incredible amounts of weight. The 55 bar-facing burpees seemed like they would prove to be a lot more challenging for a stronger athlete.

But the numbers reveal that the exact opposite happened. Plot twist: The athletes who were fit enough to finish faster on 18.2 were also fit enough to lift heavier weights on 18.2a.

To discover this, we grouped all the athletes by the minute they finished 18.2 and plotted that against the average lift of that group. There was a strong correlation between faster 18.2 times and heavier 18.2a lifts. The individual men who finished in under 4 minutes lifted almost 100 lb. more on average than the athletes who took between 8 and 9 minutes to finish. A similar pattern held true for the individual women as well. 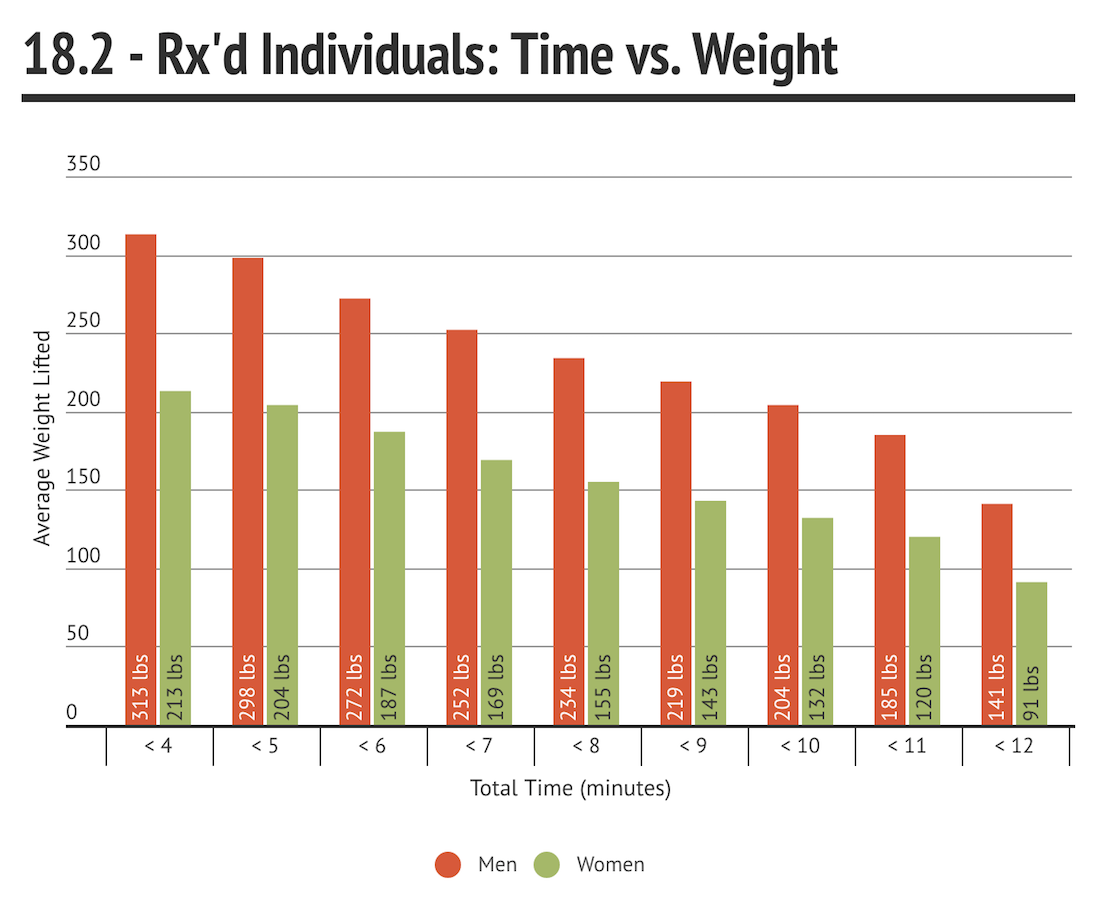 Here’s a fun experiment you can try on yourself to get a rough idea of whether your strength is more developed than your conditioning relative to your fellow CrossFit Open competitors: In the CrossFit Games app, tap on your worldwide ranking and it will show you your percentile on 18.2 and 18.2a. If your lift percentile is higher, this might suggest you could benefit from some more time spent on metabolic conditioning. If your 18.2 percentile is higher, then you might want look at spending more time training with heavier weights.

Below are the percentile tables for all divisions on 18.2 and 18.2a. You can see the breakdown of what time and weight it took to achieve a particular percentile for your division. For example, for Rx’d Masters Men 40-44, you needed a time of 7:07 and a clean of 247 lb. to get into the 90th percentile. You can see the percentage of athletes who did the scaled version in each division as well. The percentile tables are calculated by comparing each division and version of the workout. This differs from the percentiles you’ll see in the CrossFit Games app, which shows you your overall percentile in your division, against both Rx’d and scaled competitors. 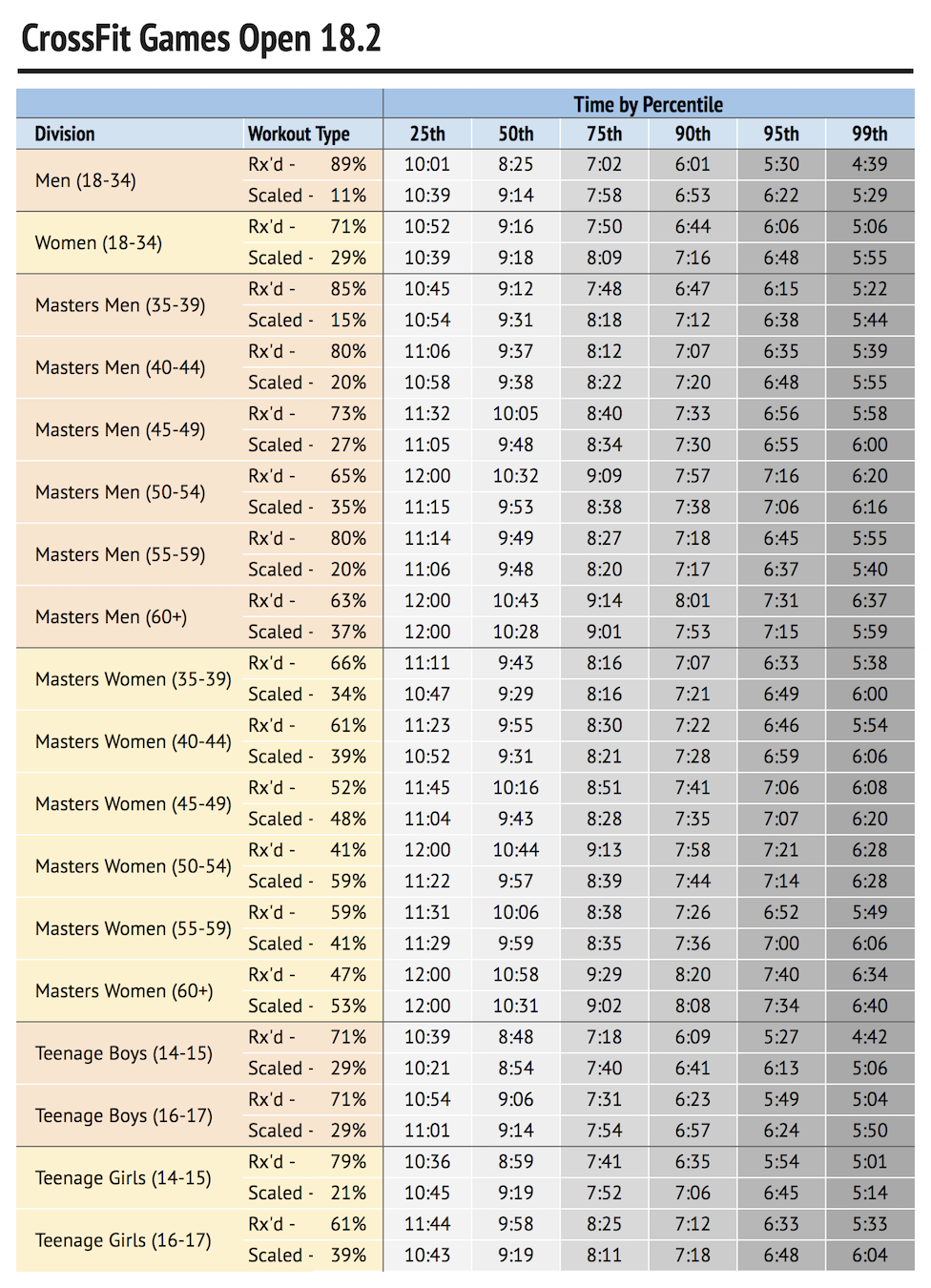 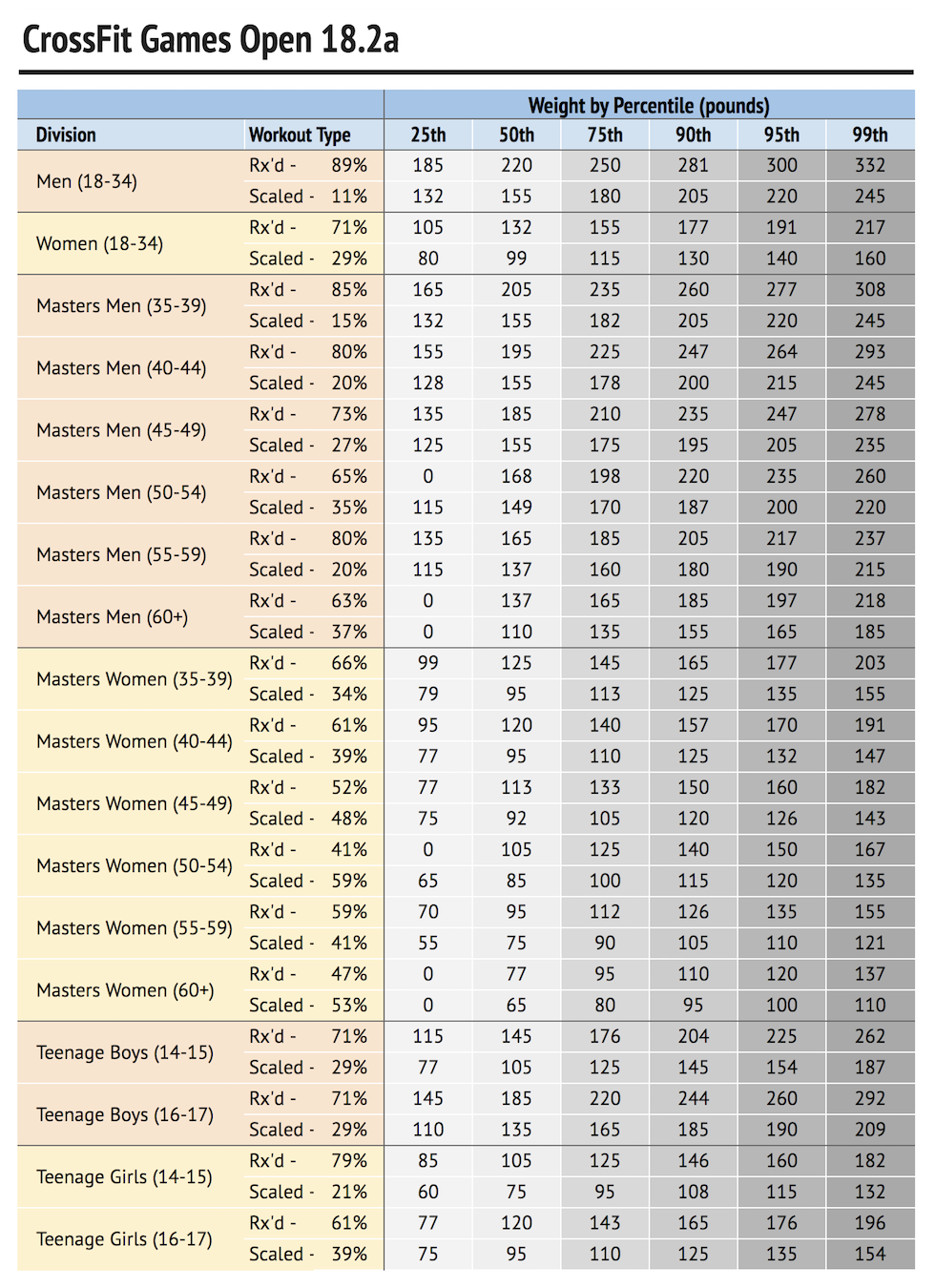