Continuing the pattern of 20-minute workouts in Week 1 (16.1 was a 20-minute AMRAP, and 17.1 had a 20-minute time cap), 18.1 challenged athletes to find a proper pace and avoid the urge to come out way too hot. The calorie/hour pace on the row and the strategy for when to break the toes-to-bars had a big effect on an athlete's success in this workout. More athletes had to break up the reps on the toes-to-bars compared to the clean and jerks.

Director of the Games Dave Castro introduced a new movement to the Open this year: the single-arm dumbbell hang clean and jerk. This is a similar movement to the alternating dumbbell snatch (single arm, from the floor) and the dumbbell power clean (double arm, from the floor) we saw introduced in 17.1 and 17.2, respectively. Although it was performed with a single dumbbell, the reps were not alternating. This minimized the number of transitions between hands and was a welcome simplification.

This year, there was a 3-percent increase in participation from masters athletes, up from 41 percent of the overall Open pool last year. The individual division, ages 18-34, is still the largest group, but we’re seeing more and more older athletes participate each year, which is great. The teenage divisions are still sitting at about 2 percent of the total field, with the younger age group (14-15) comprising about 40 percent of that. 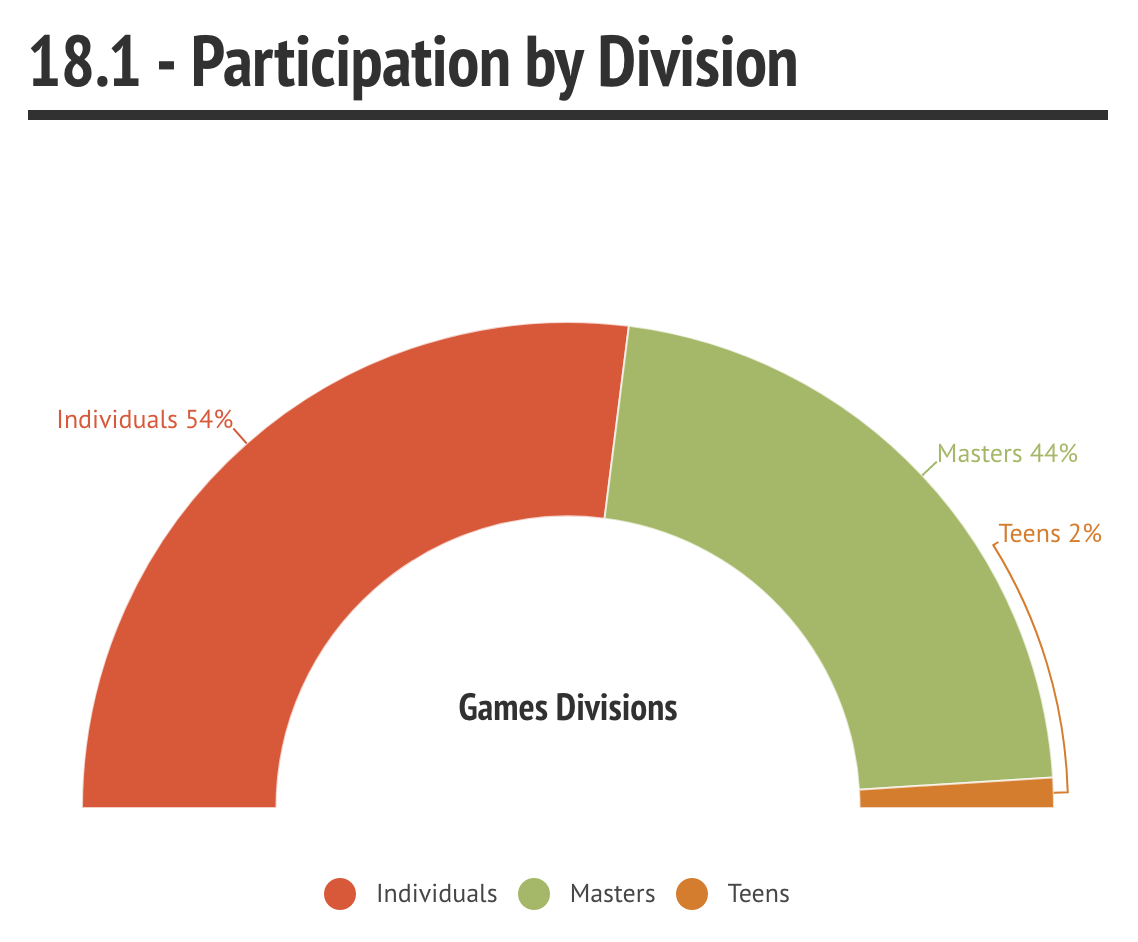 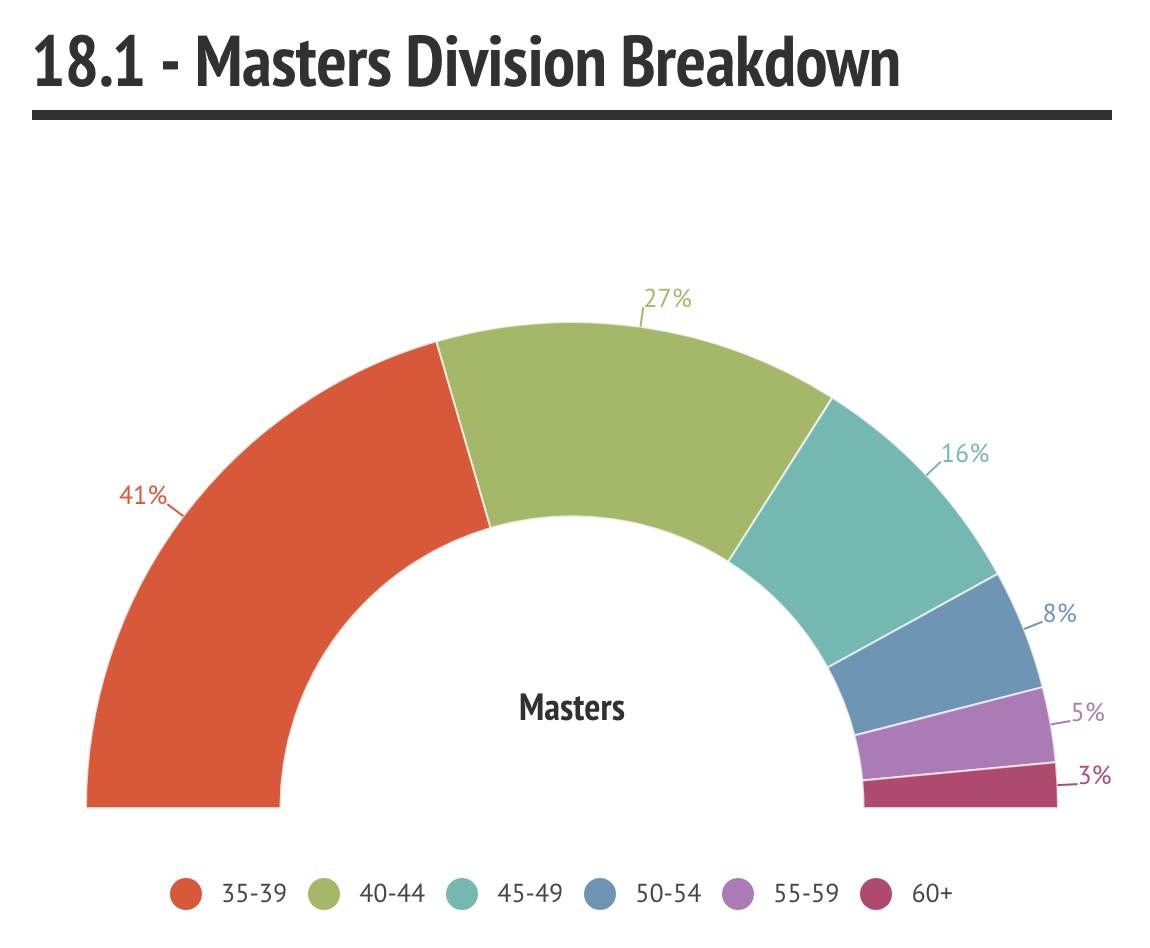 The Open competitors are pretty evenly divided by gender across all divisions, with men making up 56 percent, and women making up 44 percent. 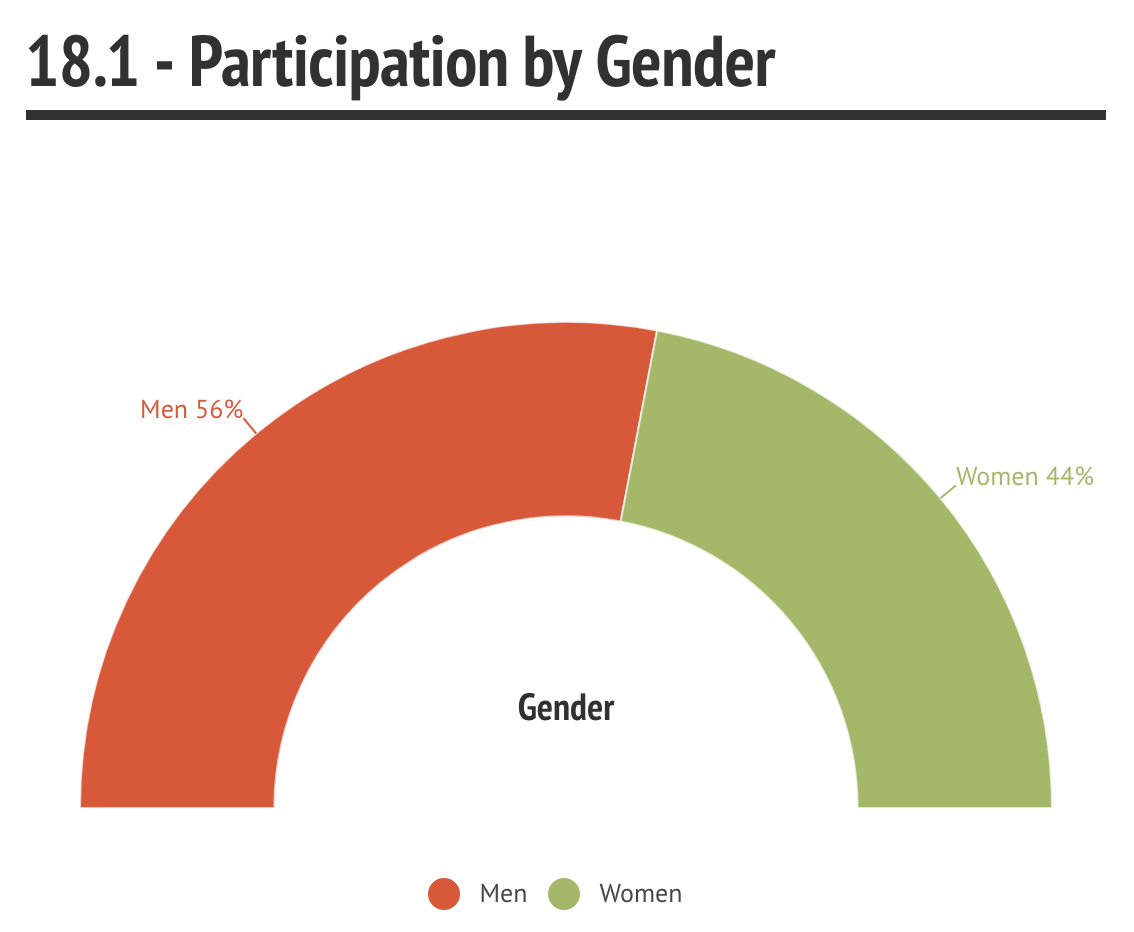 A few months ago, Castro announced that there were to be some major changes to the Regional format this season. For example, there will be nine Regionals instead of eight. Californians will combine with the former North West to form the West Coast and will compete against Canada West at the West Regional. Based on the chart below, it seems like the spots have been divided up pretty consistently according to the relative sizes of the different regions. The West Coast is much larger than Canada West, for example, and it will have 35 spots to Regionals, compared to five for Canada West. The two smallest Regionals, Meridian and Latin America, will have four spots and one spot to the Games, respectively, compared to the five spots that each of the other Regionals are allocated. 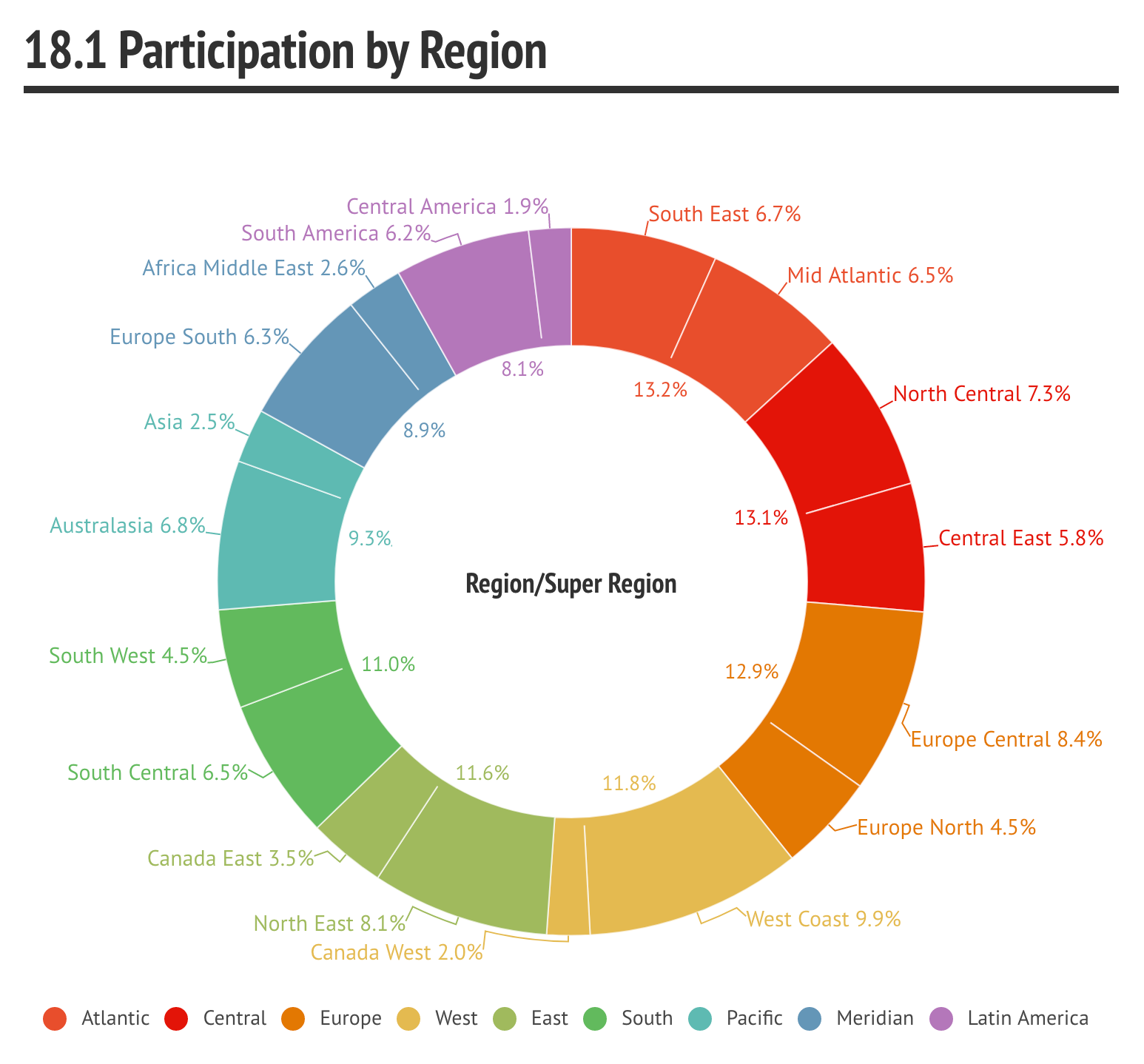 The most advanced movement in 18.1 was the toes-to-bar, which made the challenge accessible to the majority of athletes. Compared to 17.1, the Rx’d percentage for the men was the same (85 percent), and the percentage was slightly lower for the women (63 percent on 17.1 vs. 60 percent on 18.1). 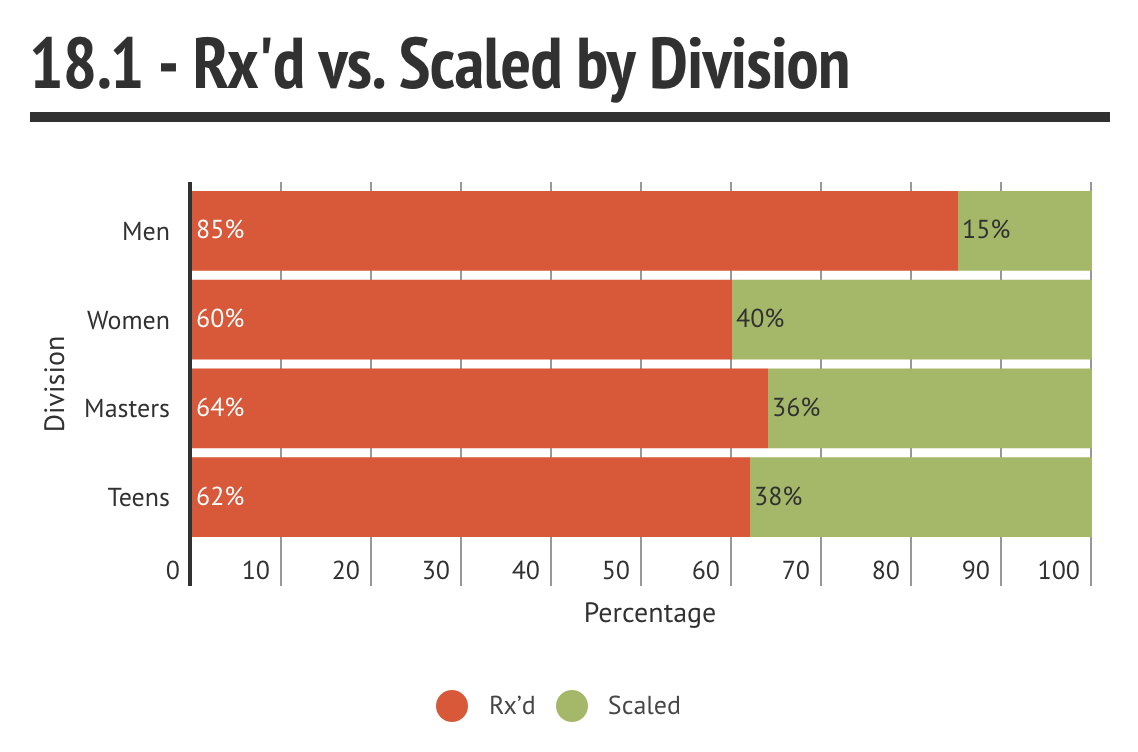 There weren’t any major roadblocks on this workout. The rep counts per round were pretty low, which helped prevent athletes from getting stuck at any particular point for too long. This can be seen below in the smooth score distributions on the graph. Even though the women were rowing 12 calories each round compared to 14 for the men, the men still scored about a round more on average. Most of the women finished with around eight to nine rounds, while most men finished with around nine to 10 rounds. Currently, the top Rx’d individual men and women logged more than 15 rounds each. 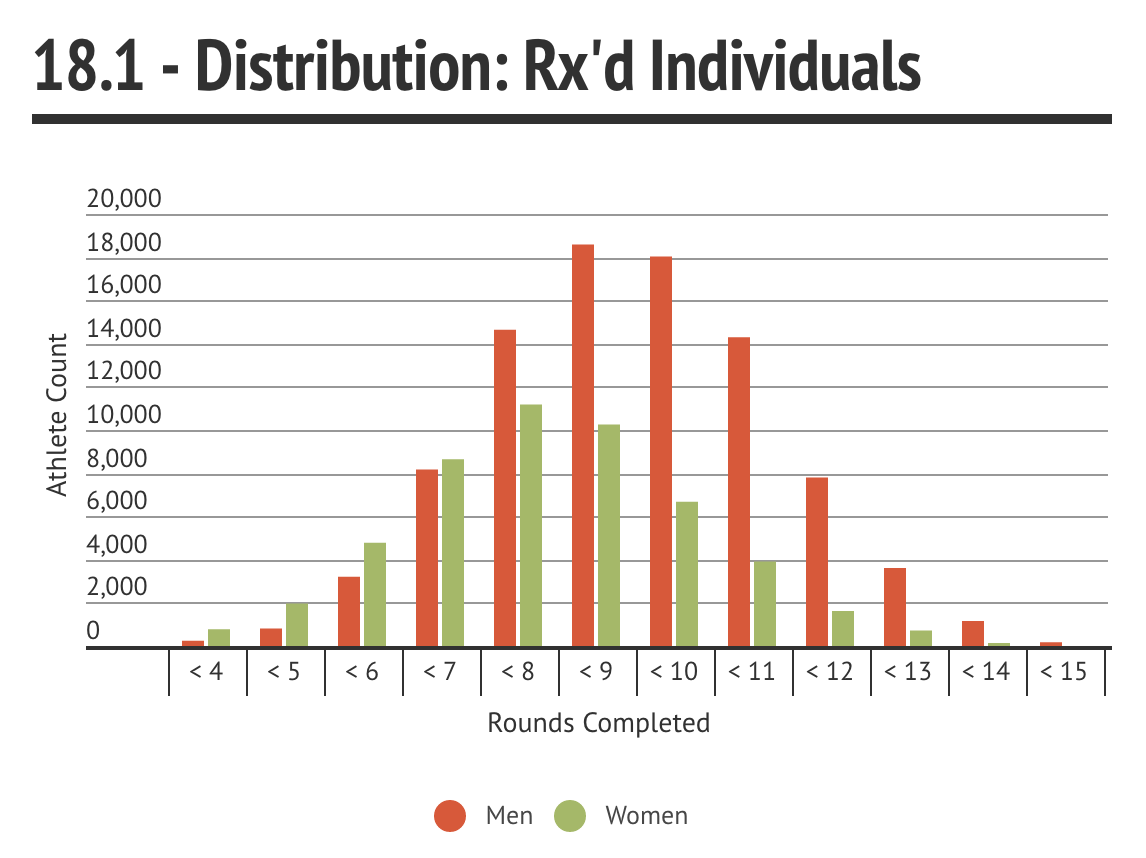 Below is the full percentile table for all divisions. You can see the breakdown of how many reps it took to achieve a particular percentile. For example, for Rx’d Masters Women 35-39, you needed a score of at least 349 reps to get into the 99th percentile. You can see the percentage of athletes who did the scaled version in each division as well. 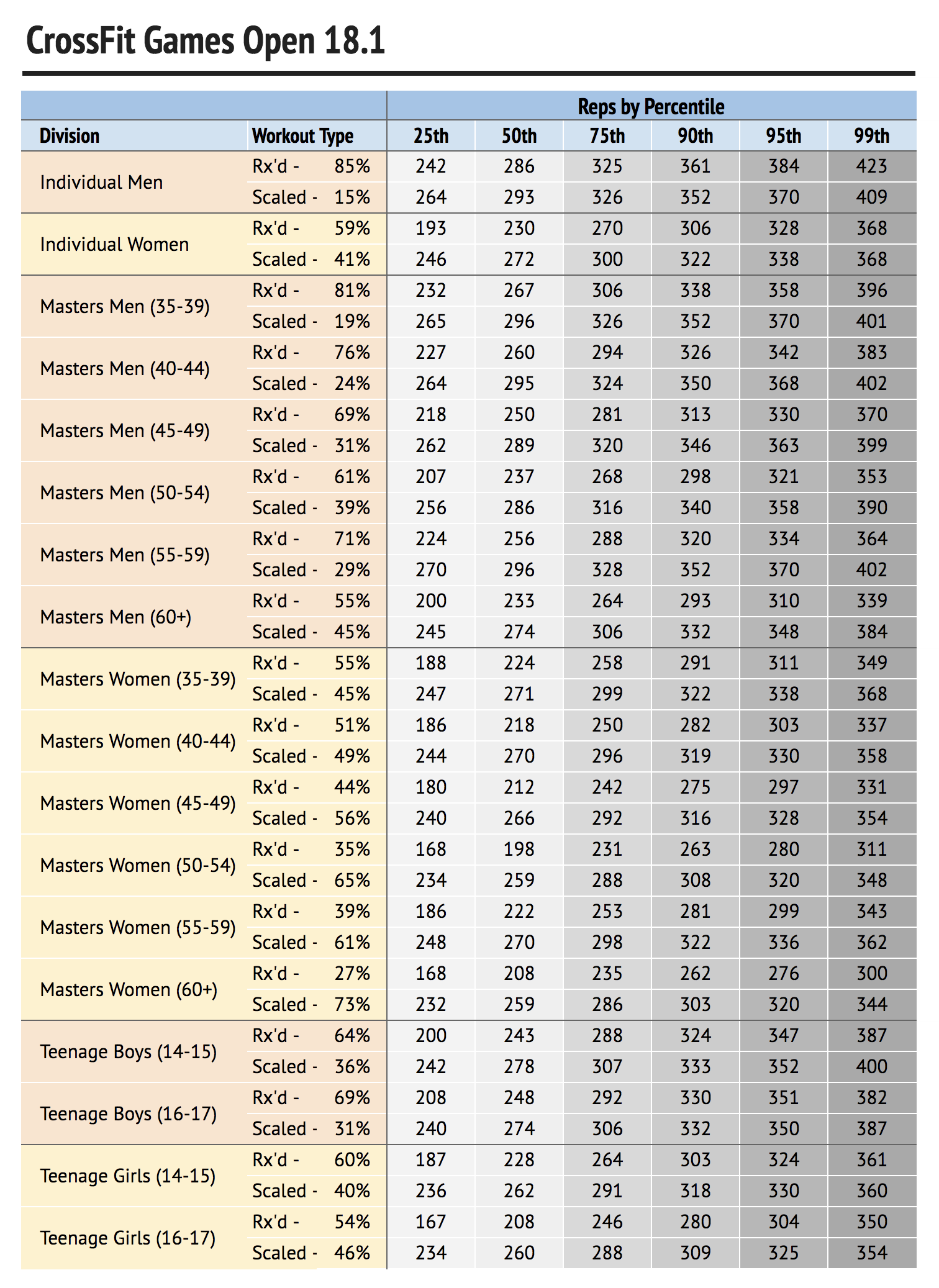