The regionals end with a down and back chipper, and a sprint.

Can anyone finish this down and back chipper?

Maybe a few people like Sam Briggs and Rich Froning. The vast majority of the regional competitors will work as far as they can before the clock reaches 21 minutes.

We’ve seen this before.

Then, on the third weekend, four women pulled it off. Another joined them two weeks later. Those women—Julie Foucher, Michele Letendre, Camille Leblanc-Bazinet, Kristan Clever and Annie Thorisdottir—would go on to take second, 24th, sixth, fourth and first at the 2012 Reebok CrossFit Games.

Although the chipper could be referred to as the “50s,” don’t confuse it for less work. The 100s of past years demanded a total of 400 reps. The “50s” demands four hundred and fifty.

The 50 reps that we should pay attention to are the 50 on the rings. This marks the middle of the event, the competitors will be tired, and the rings will be punishing.

We’ve seen competitors get held up on the rings, especially when expected to do large sets. Like handstand push-ups, once they’re gone, they’re gone for a while. Just ask Rocklin CrossFit. The team made it to the final event of the 2012 Reebok CrossFit Games only to be dismantled by Elizabeth. The athlete fatigued on the rings, and couldn't recover.

64 pull-ups
8 overhead squats (205 / 135 lb.)
Long and short. Long and short.
The second and third days of the 2014 Regional competitions will start with a long event and end with a sprint.
The final event of the 2014 Regionals will go fast.
Based on the stats provided on Games-site profiles, the average max set of pull-ups by female regional qualifiers is 36, while the average max set by male regional qualifiers is 55. Those numbers increase to 49 for female competitors who qualified for the Games in 2013 and 59 for the men.
Given that the average max set of pull-ups is close to 64 for the men, expect to see many do all 64 unbroken.
Chris Spealler set off on a quest for 100 pull-ups five years ago, and once he finally broke the 100-rep barrier, he went on to get 106. Spealler, Bridges, and other smaller competitors should blaze through the first half of the event.
Few women can complete 64 pull-ups in one set, but if you want to see it happen you should tune into the South East Regional on May 11, or the Canada East and North West Regionals on May 18. According to the numbers posted on their Games profiles, Talayna Fortunato (75), Camille Leblanc-Bazinet (80) and Emily Carothers (70) have it in them.
Once the pull-ups are done, it will be a race through the eight overhead squats. The average regional qualifier is able to snatch these weights, and will likely try to take down all eight reps unbroken.
Competitors whose max snatches are below average may have to clean and jerk the barbell, which could cost precious extra seconds in tight competitions.
Any flaws in the competitor’s squat, and midline stability, will be punished.
“The overhead squat is to midline control, stability, and balance what the clean and snatch are to power—unsurpassed,” CrossFit CEO and Founder Greg Glassman wrote in the 2005 CrossFit Journal article The Overhead Squat. 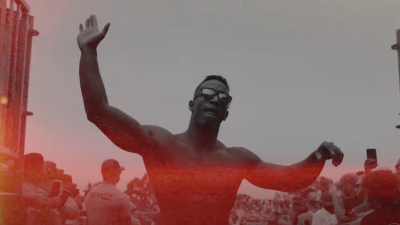 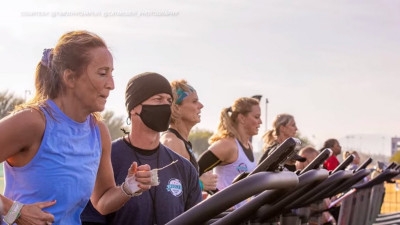 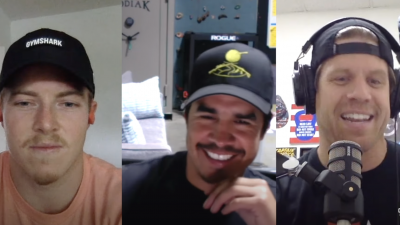 Inside the Leaderboard: Athlete Turnover
8,810 views

Inside the Leaderboard 09.03: The Masters Are Unstoppable
4,997 views