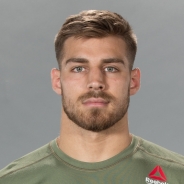 Alex Anderson, a native of Knoxville, Tennessee, is a two-time individual CrossFit Games athlete. After competing with CrossFit CHF and CrossFit Ktown’s team Jacked and Tan at the 2012 and 2013 Central East Regionals, he transitioned to the individual competition in 2014, making his debut Games appearance one year later with a 13th-place finish and improving to 11th at the 2016 Reebok CrossFit Games. A member of one of CrossFit’s fittest families, Anderson is one of three brothers to compete at the CrossFit Games—Jacob Anderson competed alongside him in 2016, and ZA Anderson took 10th at the Games in 2013—and his father, Steve Anderson, won the Masters Men 55-59 Division in 2011.