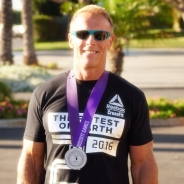 Stephen Angove is a five-time CrossFit Games masters athlete. After starting CrossFit in 2013 and with no prior athletic experience other than recreational sports, he took second in the 2014 Reebok CrossFit Games Masters 60+ Division just one year later. Angove has returned to the Games every year since, taking fifth in 2015, reclaiming his second-place podium finish in 2016, finishing fourth in 2017 and seventh in the 2018 CrossFit Games in Madison, WI. Angove is a CPA in Rochester, Washington.