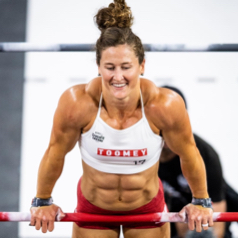 Queensland, Australian native,Tia-Clair Toomey rocked the CrossFit world after taking second at the 2015 Reebok CrossFit Games as a rookie—after only two years of CrossFit—and earning the distinction of Rookie of the Year. She proved it was no fluke with another second-place finish in 2016. Though her background is in track and field, she became Australia’s top-ranked female weightlifter in 2016, qualifying for the Summer Olympics in Rio de Janeiro, Brazil, where she snatched 82 kg (180.7 lb.) and clean-and-jerked 107 kg (235.8 lb.) for 14th place in the 58-kg category. Owner of PRVN Fitness (an online programming platform), she is the only CrossFit athlete to have competed in the CrossFit Games and the Olympics in the same year. After competing at the Crossfit Games for 8 years, Tia is the most dominant Crossfit athlete of all time, winning 6x consecutive games titles. Tia also qualified Australia a spot in the 2-man Bobsleigh for the 2022 Winter Olympics in Beijing, China, & won gold in the 2018 Commonwealth Games in the 58-kg category in Olympic Weightlifting.