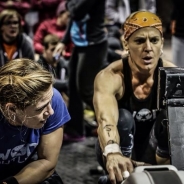 Tracy Shuford is a four-time CrossFit Games athlete, with one appearance competing with team CrossFit Greensboro at the 2012 Reebok CrossFit Games and three appearances as a master (2013-2016). Shuford took eighth in her first appearance in the Masters Women 40-44 Division at the 2013 Reebok CrossFit Games, cutting her rank in half to fourth in 2014. After a one-year gap, she returned to the Games in 2016 to take a career-best finish of second in the 45-49 Division. A former collegiate softball and basketball player and All-American in soccer, Shuford owns College Hill CrossFit in Greensboro, North Carolina.