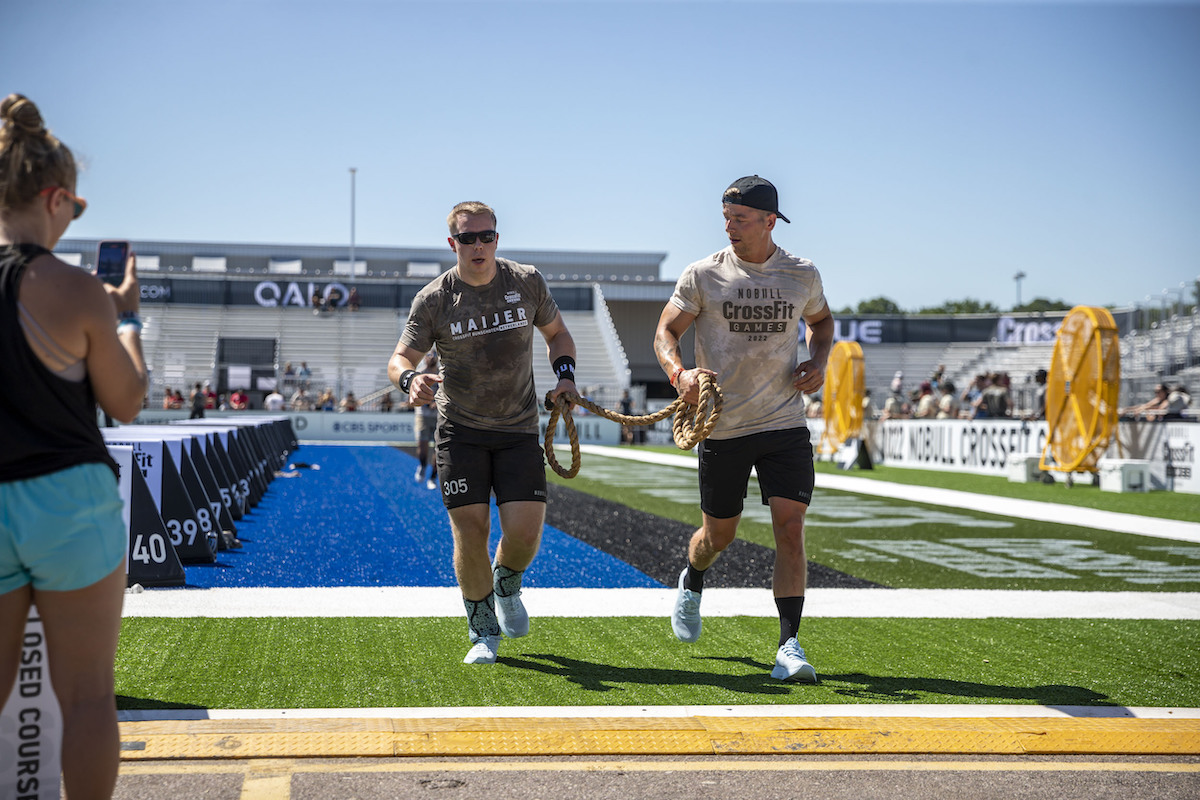 It began with a sharp pain in his left eye. Less than a week later, neuromuscular adaptive-athlete Kevin Maijer had less than 3% of his vision left. In January 2020, Maijer was diagnosed with multiple sclerosis, a disease that has impaired his vision and the left side of his body.

When the first adaptive event, Three Ways Down, was announced, Maijer was faced with the challenge of navigating a long running course within a crowded field of athletes — without his guiding stick. Plus, a rise in body temperature makes his condition even worse, he said.

But that didn’t stop him from completing the event.

The fifth-place Adaptive Semifinal finisher was allowed a guide to run alongside him to keep him on the path and away from obstacles. So Maijer chose his coach to be his guide.

Martin Koelewijn was prepped with the judging staff to ensure he was not providing an advantage over the other competitors, and coach and athlete grabbed hold of either end of a short rope and ran side-by-side throughout the course and back into North Park Stadium.

“It was fun to be there with him,” Koelewijn said.

Once the run was complete, Koelewijn was ushered off the field. The rope climbs and dumbbell shoulder-to-overheads were all up to Maijer. Although at 20 feet the rope was almost a meter higher than the one he trained with in his gym at home, Maijer confidently scaled the rope and slid down seamlessly, cranking out large sets on the dumbbells.

Mestre: Back for More 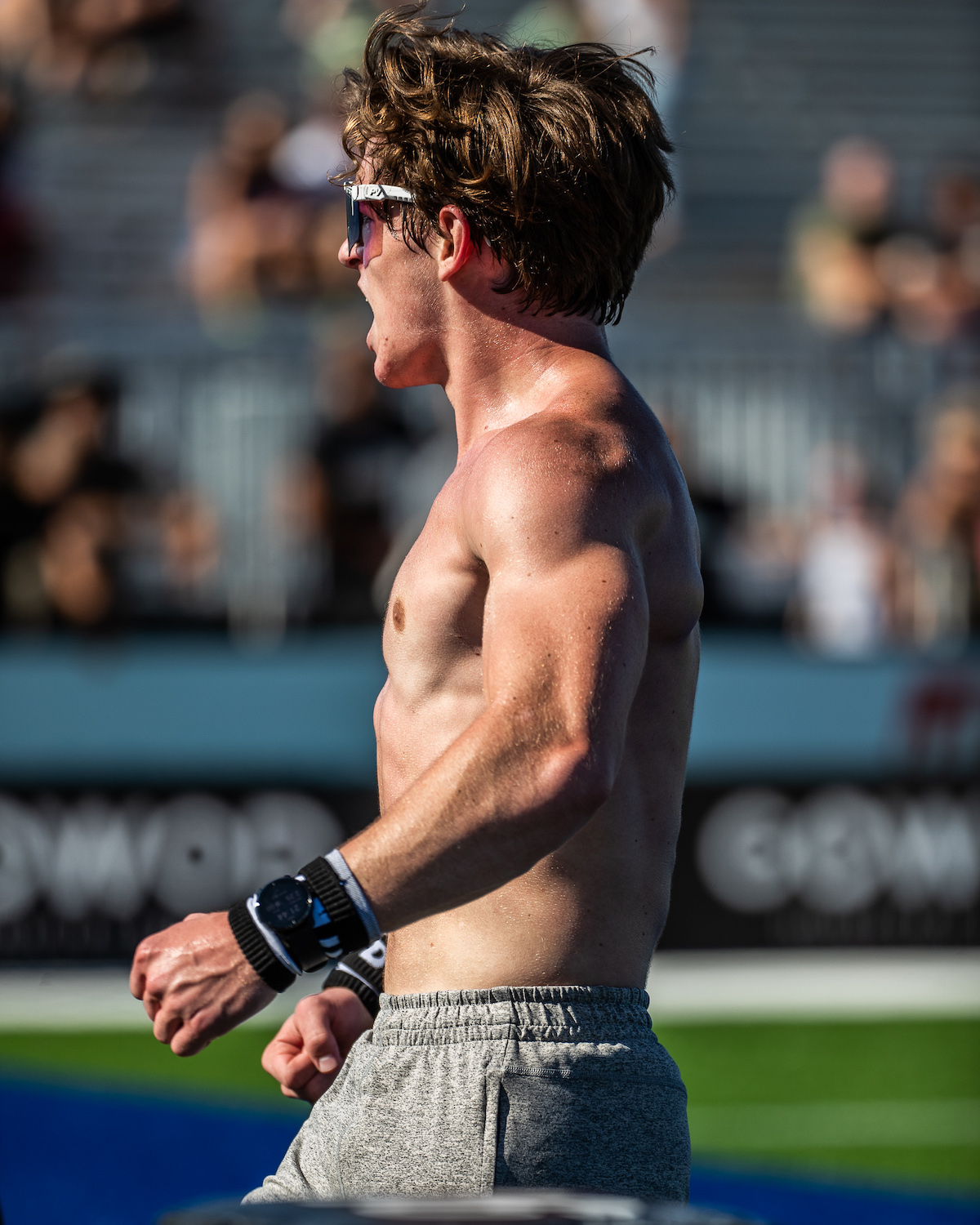 RJ Mestre got a taste of victory with his first and only event win during the final event of the 2021 CrossFit Games.

This week, Mestre is back for more.

He dominated his way to Madison in the Boys 14-15-year-old division, going three-for-three to win every qualifying event to secure his ticket.

Mestre nearly went three-for-three on Thursday, too. His year of experience was evident on the floor with first-place finishes in both Max Trio and Three Way Down, capping the day with second place in Skills Chipper.

The homeschooler and Georgia native came into the Games with big goals to win, which would be a great improvement on his fifth-place finish in 2021. Mestre is in a great position to continue his momentum headed into the second day of competition for the teens.

The Power of the Community 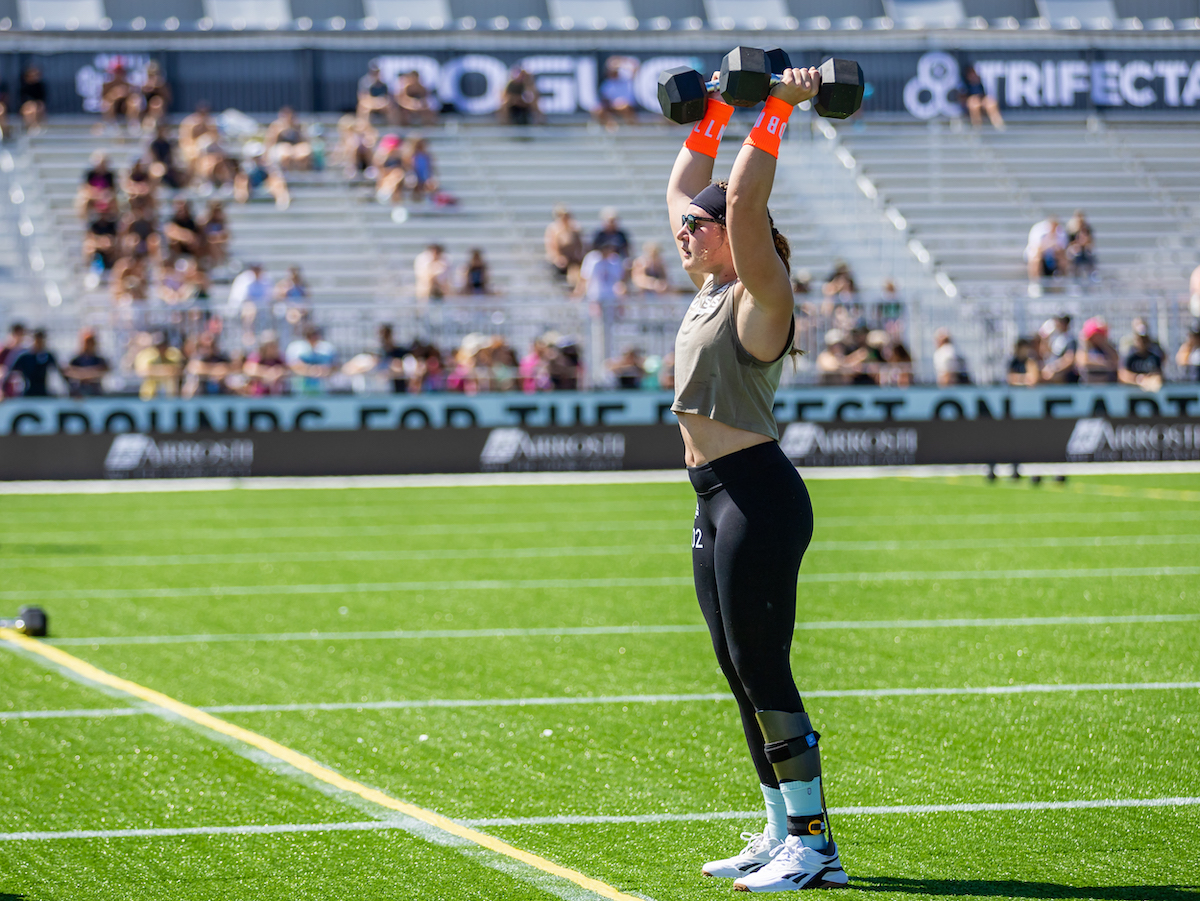 On the first day of the 2021 CrossFit Games, an adaptive athlete caught the attention of the crowd as she began to skip the entire 3-mile run in the first event.

Letchen du Plessis — the “semi-bionic” athlete — had been diagnosed with complex regional pain syndrome and dystonia, losing most of the function in her left leg. And because she wasn’t permitted the help of her crutches during the run, she relied on a brace that only slightly helped propel her leg. Through a skipping movement, she slowly chipped away at the run until she met the 45-minute time cap.

A fellow member of the CrossFit community caught a glimpse of the skipping athlete on the CrossFit Games YouTube channel and reached out to du Plessis with an offer to fit her with a special brace that would allow her to do just that.

In March 2022, du Plessis was fitted with her new brace and could then run 3 km unassisted.

“I will be forever grateful for this community because I never thought running would be a possibility for me,” she said.

The first adaptive event of the 2022 NOBULL CrossFit Games saw a long running event again, totalling just over 2 miles, but Plessis wasn’t afraid of the challenge this year. She took the run in full force, crossing the finish line in 25:40.66. 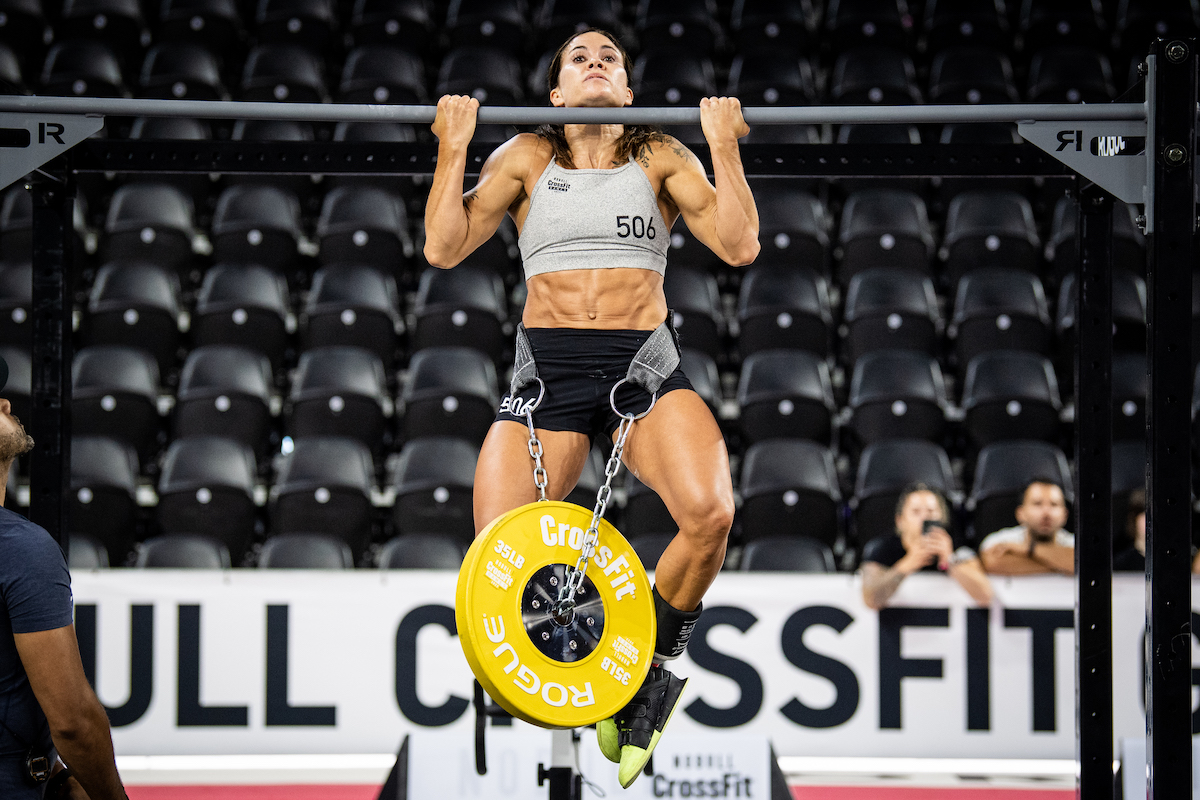 If you’ve been watching the livestream of the Games this week, you might have heard commentator Chase Ingraham mention that Austin Spencer and Caroline Conners are the fifth married couple to compete at the Games.

But did you know that Julie and Nate Ackermann missed out on being the first parent-child tandem at the same Games by one year?

Nate won the Boys 16-17 division in 2021, finishing second in six out of nine events and winning the competition by 60 points over second place.

This year, Julie, his mom, is competing in the Women’s 50-54 division.

A former collegiate diver for the University of Wisconsin at Madison, Julie also competed at the Games in the 45-49-year-old division in 2017 and 2018, placing fourth and eighth, respectively.. Now living in Chicago and training and coaching at CrossFit Rally Point Northbrook, she has Nate — and seemingly half of her gym family — in the stands loudly and wildly cheering her on.

Julie’s 2022 Games started with a seventh-place finish in Three Ways Down followed by eighth in Max Trio, in which she posted a 185-lb front squat. She then finished out her day with a fifth-place finish in Skills Chipper, ending in seventh overall after one day of competition.

“I felt good about it,” she said. “I’m not the strongest athlete, but I did what I could. I think (Nate and I) are similar that way, pretty well-rounded. I just do my best in every event.” 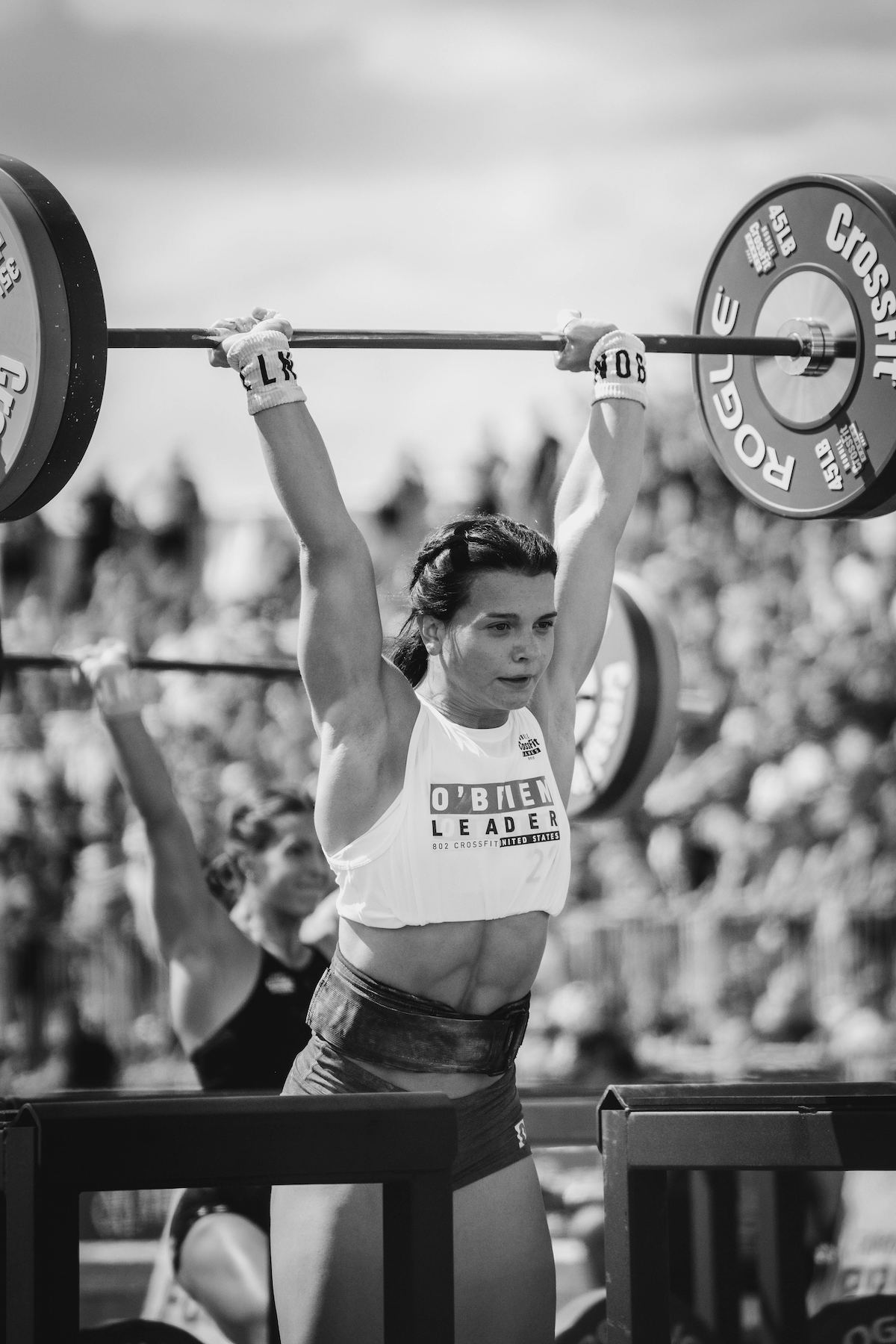 Two hundred points were up for grabs, and the jackpot could be secured in just 15 minutes’ time.

The individual athletes returned to North Park this afternoon to take on the rescheduled Event 2, Shuttle to Overhead: a two-part workout with a timed shuttle sprint and max-rep jerk.

After an eighth-place end to Day 1, the five-time CrossFit Games champion was eager to grasp her chance to jump back to the top.

But 18-year-old Mal O’Brien — repping the leader's jersey — and 17-year-old Emma Lawson did not relinquish their lead.

As expected, Tia-Clair Toomey cycled the barbell fast, banking the most jerks at 18 reps in Shuttle to Overhead B. But Lawson and O’Brien followed close behind, accumulating 13 and 14 reps, respectively. Combined with Toomey’s 19th-place finish in the Shuttle to Overhead A, the teens held tight to their top spots on the leaderboard.

Toomey will enter Day 3 in third place, with O’Brien in first and Lawson in second.

Rewatch all the action from Day 2: